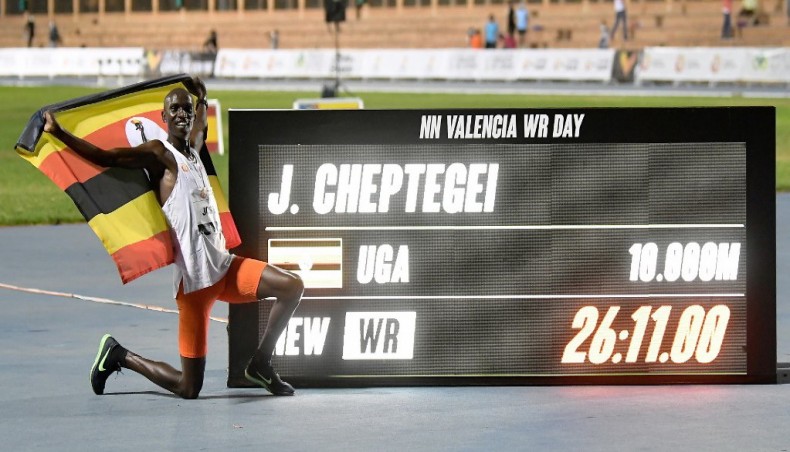 Ugandan athlete Joshua Cheptegei waves the Uganda national flag as he celebrates after breaking the 10,000m track world record during the NN Valencia World Record Day at the Turia stadium in Valencia on Wednesday. — AFP photo

Joshua Cheptegei smashed the 10,000m track world record and Ethiopia's Letesenbet Gidey set a new mark for the women's 5,000m on a heady night of athletics in Valencia on Wednesday.

All the talk in the run-up to the meet was of Cheptegei's assault on Kenenisa Bekele's time of 26min 17.53sec established in 2005 in Brussels.

The 24-year-old 10,000m world champion surpassed expectations, running the distance in 26mins 11.00 seconds to cement his standing as the new middle distance maestro.

This was his third world record this year.

In February he claimed the world 5km road record in Monaco.

Then, after a period of coronavirus lockdown in his native Uganda, he returned to Monaco and, in his first race back, wiped almost two seconds off Bekele's 16-year-old track world record time over the 5,000m as he clocked 12min 35.36sec.

He becomes only the 10th athlete to concurrently hold the 5000m and 10000m world records.

Cheptegei served notice of his class when he took silver at the 2017 world championships in London when he was still just 20.

Up to Wednesday Cheptegei only had the 18th quickest time over the distance with a best in Doha of 26min 48.36secs, over half a minute outside the record.

But his performance in August boded well and he was assisted by some rapid pacemakers, notably the Kenyan Nicholas Kimeli who was a world finalist over 5,000 metres, and electronic timing along the track.

Another factor for the fan of Manchester United was his footware, Nike's carbon-plated Nike Vaporfly worn by Ethiopia's Gidey when she ran the earlier 5,000m in 14 minutes 6.62 seconds.

The 22-year-old was lowering the previous mark of 14min 11.15 held by her compatriot Tirunesh Dibaba since 2008 by over four seconds.

Gidey put up the run of her short career a year after taking 10,000m silver at the world athletics championships in Doha.

With two pacemakers helping her record bid until the 3,000m marker Gidey maintained a ferocious pace to etch her name in athletics' record books.

‘I'm happy,’ said Gidey. ‘I dreamed about this record for six years. I want to thank Valencia for giving me this chance.’