It, however, increases by 15.7 per cent in August 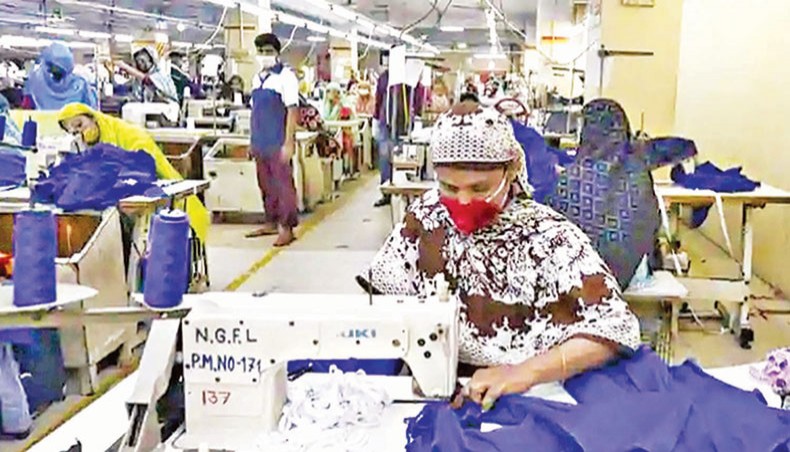 A file photo shows workers wearing facemasks sewing clothes in a garment factory in Dhaka in May. Bangladesh’s readymade garment exports to the United States in January-August this calendar year fell by 14.56 per cent or $594 million compared with that in the same period of 2019 as consumption still remained slow in the destination due to the impact of coronavirus pandemic. — AFP photo

Bangladesh’s readymade garment exports to the United States in January-August this calendar year fell by 14.56 per cent or $594 million compared with that in the same period of 2019 as consumption still remained slow in the destination due to the impact of coronavirus pandemic.

The US apparel import from Bangladesh in the first eight month of this year decreased to $3.48 billion from $4.08 billion in the same period of last year, according to the US Department of Commerce’s Office of Textiles and Apparel data.

Although the country’s export earnings from the US declined due to the pandemic, the inquiry for apparel products from global buyers increased by 86 per cent year-on-year in September by the continuing influx of US buyers, according to a recent global report.

Experts and exporters said that this was the scenario of global business due to the pandemic and it was not clear whether the major markets of apparel would rebound within the short time.

The impact of COVID-19 on US’s apparel import started since January this year, which turned catastrophe during April-June, and since July the scenario has started improving, Bangladesh Garment Manufacturers and Exporters Association president Rubana Huq told New Age on Thursday.

‘Until June, US’s clothing import from Bangladesh was not showing any sign of recovery, where import from world declined by 43 per cent in June, the decline from Vietnam and Bangladesh were 20 per cent and 57 per cent respectively,’ she said.

So, Bangladesh’s recovery in the US market, significantly throttled by reinstatement of cancelled goods, is visible since July, Rubana said.

During January-August 2020, the unit price of apparel import by the US from Bangladesh declined by 3.17 per cent, which was as high as -3.70 per cent in the month of August year-on-year, the BGMEA president said.

According to the data, Bangladesh’s apparel export to the US in August this year grew by 20.1 per cent in volume (million square metre) whereas the export in value increased by 15.7 per cent.

‘It means unit price of product is compromised in the US market due to the effect of the coronavirus pandemic,’ Policy Research Institute of Bangladesh executive director Ahsan H Mansur told New Age on Thursday.

He said that Bangladesh was still producing the orders which were previously halted by the buyers due to the pandemic.

Growth future in the US and the European Union are gloomy as the markets are mature and their economies remain under ‘life support’ due to the pandemic, Ahsan said.

He recommended that Bangladesh should devise policy keeping in mind the growing market of Asia and manufacturers would have to go for forward looking transformation.

A recent study conducted by QIMA, supply chain compliance solutions provider, showed that Bangladesh saw its demand for textile and apparel inspections surging by 86 per cent year-on-year in September.

It said that the demand for inspections and audits in South Asia rose across the board in July-September, as the tentative recovery that had begun in June continued and progressively accelerated for three consecutive months (inspection demand volumes climbed by 7 per cent year-on-year in July, 10 per cent in August and 28 per cent in September).

‘This recovery is being led by South Asia’s textile powerhouses such as Bangladesh, where demand for textile and apparel inspections surged 86 per cent year-on-year in September, propelled, among other factors, by the continuing influx of US buyers as they continue diversifying their apparel supply chains away from China,’ the report read.