If 13th amendment is next in line for change 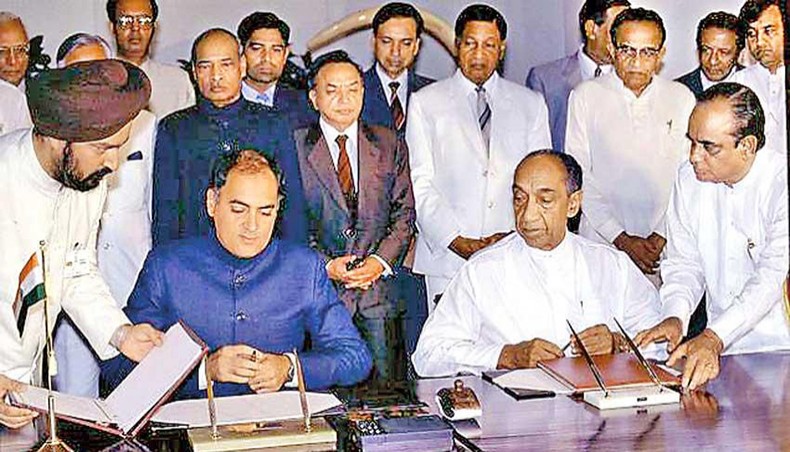 The 13th amendment to Sri Lanka’s constitution has its origin in the Indo-Lanka Accord of July 1987, signed by the then Indian prime minister Rajiv Gandhi and the then Sri Lankanp president JR Jayawardene. — dailymirror.lk

THE primary justification for the government’s campaign to replace the 19th amendment with the 20th has been the need to strengthen the president’s hand to govern the country in the aftermath of the misgovernance that took place under the former amendment. The argument that the strengthening of the presidency is needed for decisive action to be taken on behalf of the country spills over into other areas of governance. As presently formulated the 20th amendment seeks to weaken institutions at the level of the central government itself to the extent they will find it difficult to check and balance the presidency. This includes weakening parliament and the cabinet and also institutions such as the judiciary, public services and the auditor general.

As the 20th amendment will give the president the power to sack any minister at will, it is no cause for wonder that dissent from within the government ranks is mute. It has been left to those outside the government to make their objections known. The state auditors and the bar association have made strong arguments against the weakening of the audit function and the lack of accountability of the president that has been proposed. The framers of the 20th amendment have sought to capitalise on the high level of trust placed in president Gotabaya Rajapaksa by the general population. As he is new to politics and not tainted by having been a politician but respected for being a public official as defence secretary the general population does not seem to be unduly troubled by the 20th amendment and its potential for misuse.

Accompanying the attempt to weaken other institutions and to strengthen the presidency beyond the point of reasonableness is a parallel bid by nationalist and anti-minority sections of the polity to seek to weaken the institutions of devolved power, most notably the provincial council system. There are calls from within and outside parliament to abolish the 13th amendment which the majority of the population may be prepared to go along with. Despite the benefits to the people of having devolved government and having their problems settled within the province, the provincial council system has not delivered on its potential and has been depicted as a white elephant. The problem with the 13th amendment is its origins in the Indo-Lanka Peace Accord which the then government accepted due to the force of circumstance in 1987. This has made it susceptible to criticism on account of being a foreign imposition.

THE provincial council system is the nearest that the country has come to resolving the longstanding ethnic conflict between the state and the Tamil people on the issue of ethnic majority-minority power sharing. Prior to 1987, there had been several indigenous attempts to find a solution to the problem commencing with the Bandaranaike-Chelvanyakam Pact of 1957. But they failed to be implemented due to lack of support. The 13th amendment has been the most lasting legacy of the Indo-Lanka Accord that sought to put an end to the internal war that had been gathering in intensity for a decade at that time. It comprised three main features, to disarm the LTTE, to ensure that Sri Lanka’s foreign policy was cognisant of India’s security and a framework for political power sharing that provided for limited Tamil self-rule in those parts of the country they were in a majority.

So far the government has made no official pronouncement regarding its intentions regarding the 13th amendment. At the recent virtual summit between Indian prime minister Narendra Modi and Sri Lankan prime minister Mahinda Rajapaksa, the Sri Lankan position was carefully articulated without any direct mention of the 13th amendment. This has increased speculation that the government is contemplating doing away with the provincial council system, at least as it exists at present. In the joint statement put out at the end of the meeting, it was recorded that ‘prime minister Mahinda Rajapaksa expressed the confidence that Sri Lanka will work towards realising the expectations of all ethnic groups, including Tamils, by achieving reconciliation nurtured as per the mandate of the people of Sri Lanka and implementation of the constitutional provisions.’

However, in a separate statement put out by the Indian side, Indian prime minister Narendra Modi was reported as having told Sri Lanka’s prime minister that implementation of the 13th amendment was essential. ‘He emphasised that implementation of the 13th amendment to the Sri Lankan constitution is essential for carrying forward the process of peace and reconciliation,’ said an official Indian press release. This Indian position needs to be seen in the light of India’s concerns to meet the expectations of its own Tamil population in the state of Tamil Nadu and its interest in maintaining its credibility with the Tamils in Sri Lanka. The Indian state is also conscious that over a thousand Indian soldiers died in Sri Lanka on account of the Indo-Lanka Peace Accord which the LTTE refused to accept.

IN THIS context, the government would be aware that any decision to repeal or downgrade the 13th amendment would have major domestic and foreign policy implications. Within the country, the Tamil polity in Sri Lanka has been demanding self-rule in the areas in which they are a majority that includes both the northern and eastern provinces from the mid-1950s. All Tamil parties are united on the issue of Tamil self-rule although they differ as to the quantum of power that they wish to have devolved. Even the government’s main Tamil ally, Douglas Devananda of the EPDP, who enjoys ministerial status within the government, has been consistent in calling for the full implementation of the 13th amendment as the way forward.

Recent actions of the government, such as the ties it is seeking to rebuild with the Muslim political parties, indicates that it seeks to follow an inclusive and pragmatic strategy with the intention of securing a two-thirds majority in parliament to ensure the success of the 20th amendment. Similarly, it can be expected that the government would not wish to alienate the Tamil political parties, but would instead prefer to obtain their support to govern the country according to its vision. A reduction in powers to the presidentially appointed governors would facilitate more to be done for people by the provincial councils. There is no need for the central authorities to look into education, agriculture, health for instance as they are devolved. Land and police powers to the provincial councils have still not been devolved even after the passage of 33 years. Such changes to the provincial council system will need to be done in consultation with the ethnic minority parties who are key stakeholders.