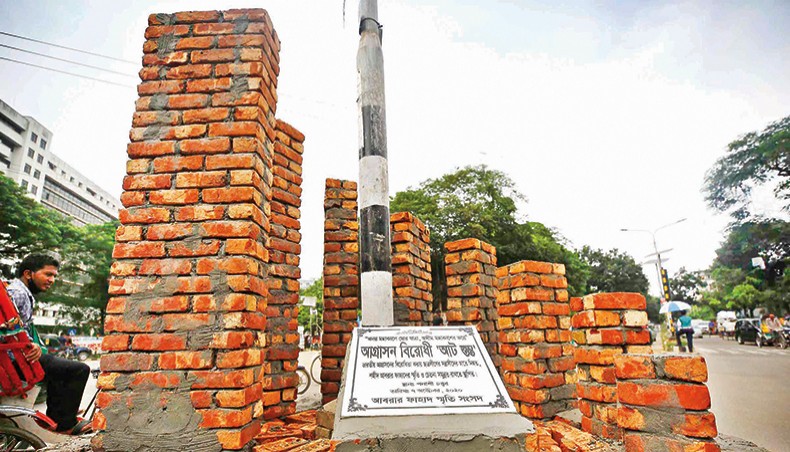 The construction work of a memorial in memory of BUET student Abrar Fahad is in progress on Wednesday at Plassey crossing in Dhaka. Abrar was killed by Bangladesh Chhatra League activists on October 7, 2019. — New Age photo

A memorial was erected in the Plassey crossing, adjacent to the Bangladesh University of Engineering and Technology, in memory of the university student Abrar Fahad marking his first death anniversary on Wednesday.

Abrar, 21, a second-year electrical and electronic engineering student of BUET, was beaten to death in the university’s Sher-e-Bangla Hall by Chhatra League leaders and activists early October 7, 2019 apparently for his critical views of the government and Indian ‘aggression’ on Bangladesh posted on social media.

The brutal murder sparked countrywide street protests and condemnations in home and abroad.

‘We paid tribute to Abrar by constructing the memorial. He is the symbol of protests against the Indian aggression,’ said Dhaka University Central Students’ Union’s former social welfare secretary and Chhatra Odhikar Parishad leader Akhter Hossain.

The plaque of the memorial sports a quotation from Abrar Fahad’s Facebook wall that reads, ‘My journey towards eternal eternity, at the end of infinite space’.

BUET registrar Mohammad Forkan Uddin in a statement on Wednesday expressed sympathy for Abrar’s bereaved family members and prayed for eternal peace of his departed soul.

The trial of 25 BCL leaders and activists, of which 22 arrested, began in a court in Dhaka on October 5, two days before his first death anniversary.