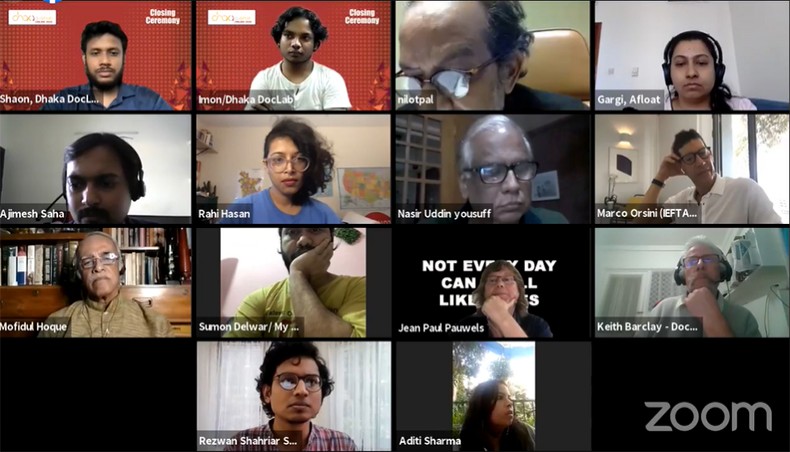 Guests and participants attend the online closing ceremony of Dhaka DocLab-2020 on Saturday.

Indian filmmaker Ajimesh Saha’s ‘An Insignia of a Forced Winter’ received the Best Project award at this year’s event which was arranged virtually due to COVID-19 crisis.

The event also presented six other awards this year.

Liberation War Museum trustee Mofidul Hoque said, ‘I would like to congratulate all the winners and participants of this year’s Dhaka DocLab. It is a great initiative which the LWM has hosted since its beginning except for this year’s edition that was held online due to the ongoing pandemic situation. On behalf of the LWM, we also thank the mentors for making this event a success.’

‘We have to give more space to the women according to our SDG goal, and it has been decided that the ratio of participation should be 30:70 but the goal is 50:50, and we hope that in next year’s edition of Dhaka DocLab, it will be a 50:50 participation and more awards will go to the women filmmakers,’ he added.

Expressing his gratitude to the Cosmos Foundation which has been the founding partner of the Dhaka DocLab, Nasir Uddin Yousuff mentioned, ‘We want to thank our long-time partner for the last four years, Cosmos Foundation, which has always played a very important role, and they have been a great support to our event this year.’ He also thanked the Bangladesh government for providing financial assistance.