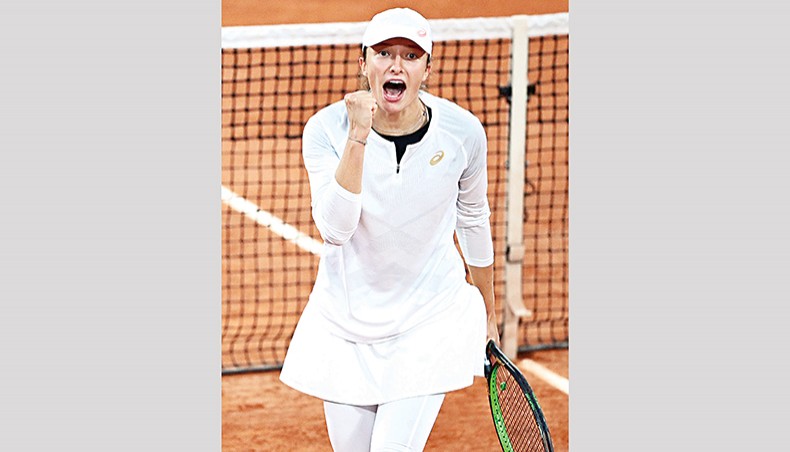 Polish teenager Iga Swiatek was hailed by her coach as ‘the beast of the competition’ after she stormed to a shock 6-1, 6-2 victory over top seed and 2018 champion Simona Halep to reach the Roland Garros quarter-finals on Sunday.

Swiatek, just 19 and ranked 54 in the world, fired 30 winners past title favourite Halep with the Romanian failing to even register a single break point in her 68-minute loss.

‘She’s a beast of the competition I would call her,’ said her coach, Piotr Sierzputowski.

‘She loves to compete, she never likes to practise, it’s so boring for her. But when it comes to the matches, she’s there.’

Swiatek will face qualifier Martina Trevisan, ranked 159, for a place in the semi-finals after the Italian stunned Dutch fifth seed Kiki Bertens 6-4, 6-4.

Sunday’s performance was an incredible turnaround for the Pole who won just one game against Halep at the same stage in Paris last year, swept off court in just 45 minutes.

‘Last year I wasn’t experienced enough, it was my first match in a big stadium so I was a little stressed,’ Swiatek admitted.

‘But I have made a lot of progress since then, playing girls like Simona, Naomi Osaka and Caroline Wozniacki. Now I can handle the pressure.’

In 2019, Swiatek was also juggling her playing career with her high school studies.

‘It was always difficult,’ said Sierzputowski. ‘I had to schedule practice in the morning at seven because she had to go to the school.

‘She’s coming to the practice tired and I’m asking, Why are you tired? Did you sleep well? No, I was studying in the night. So of course it’s something you can free your mind, but then you put a lot of pressure on yourself because you know you started being pro.’

Swiatek has reached the quarter-finals without dropping a set. In the first round, she knocked out 15th seed Marketa Vondrousova, the 2019 runner-up, for the loss of just three games.

‘I am surprised I could do this,’ she admitted after ending the 17-match winning streak of Halep who was the overwhelming favourite in the absence of 2019 champion Ashleigh Barty and US Open winner Osaka and the injury-enforced withdrawal of Serena Williams.

Swiatek, who will be playing in her first quarter-finals at the majors, swept through the opening set in just 23 minutes, firing 17 winners to Halep’s four.

The teenager tightened her grip, breaking in the first game of the second set with Halep having to fight off four break points in the third game to stay afloat.

Swiatek’s assault continued against a player who arrived in Paris with claycourt titles in Prague and Rome.

Halep, 29, saved five more break points in the fifth game but a weary forehand drifted wide and her Polish opponent was 4-1 up with the cushion of a double break.

She took victory on a second match point.

‘She played really well, it was her match today,’ admitted Halep who said she’ll quickly get over her disappointment with her season now at an end.

‘I will have a chocolate and I will be better tomorrow.’