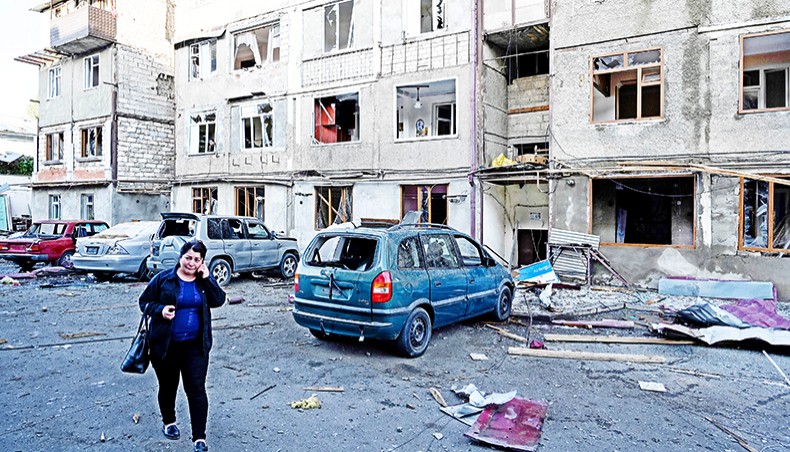 A woman cries walking in front of an apartment building that was supposedly damaged by recent shelling in the breakaway Nagorno-Karabakh region’s main city of Stepanakert on Saturday, during the on-going fighting between Armenia and Azerbaijan over the disputed region. — AFP photo

Armenian and Azerbaijani forces were engaged in fierce clashes Saturday as fighting over the disputed Nagorno-Karabakh region intensified after its main city came under heavy shelling.

The leader of the breakaway province said he was heading to the front and that the ‘final battle’ for the region had begun, seven days after new fighting erupted in the decades-old dispute.

Armenia’s defence ministry said Karabakh’s separatist forces had repelled a ‘massive attack’ by Azerbaijan in one area of the frontline and had launched a counter-offensive.

Azerbaijan’s defence ministry said its forces had ‘captured new footholds’ and that the Armenians had ‘suffered serious losses in manpower and military hardware’.

The clashes came after the regional capital Stepanakert came under artillery and rocket fire on Friday. AFP journalists in the city heard more explosions on Saturday morning.

Residents hid in shelters and on Saturday were clearing up wreckage and sweeping up the shattered glass windows of their homes and shops.

‘This is a great sorrow for our community, for our people,’ Nelson Adamyan, a 65-year-old electrician, said outside his damaged residential building.

‘But we will stand for our freedom, we will always be free.’

At least one person was reported killed in the shelling.

Both sides have been accused of hitting civilian areas, with Azerbaijan saying Saturday that Armenian artillery had shelled 19 of its settlements overnight.

The new fighting erupted last Sunday and mounting international calls for a halt to the hostilities and a return to negotiations over the dispute have gone unanswered.

The leader of the breakaway province, Arayik Harutyunyan, said he was headed to join the ‘intensive fighting’ on the frontline.

The ‘nation and motherland are under threat,’ he told reporters in Stepanakert.

‘The time has come for the entire nation to become a powerful army. This is our final battle, which we will certainly win.’

Both sides have repeatedly claimed to be inflicting heavy losses.

The Armenian side has reported 158 military deaths and said 14 civilians have been killed. Azerbaijan has reported 19 civilian deaths but has not confirmed any fatalities among its troops.

Russia, the United States and France — whose leaders co-chair a mediation group that has failed to bring about a political resolution to the conflict — called on the warring sides this week to immediately agree a ceasefire.

Armenia said Friday it was ‘ready to engage’ with mediators but Azerbaijan — which considers Karabakh under Armenian occupation — has said Armenian forces must fully withdraw before a ceasefire can be brokered.

Karabakh’s declaration of independence from Azerbaijan amid the collapse of the Soviet Union sparked a war in the early 1990s that claimed 30,000 lives.

Talks to resolve the conflict have made little progress since a 1994 ceasefire agreement.

The breakaway province is not recognised as independent by any country — including Armenia — and Karabakh’s foreign ministry said Saturday that only receiving official status from world leaders could resolve the military flare-up.

International recognition, it said, would ‘ensure the right to life and peaceful development’ of its residents and ‘is the only way towards peace and security in the region.’

The fighting has threatened to balloon into a regional conflict drawing in powerful players Russia and Turkey.

Armenia is in a military alliance of former Soviet countries that is led by Moscow, which maintains a military base there, while NATO member Turkey has signalled its full support for Azerbaijan’s military operations.

Yerevan claimed earlier this week that a Turkish F-16 fighter jet shot down one of its own warplanes and accused Turkey of dispatching mercenary fighters from Syria and Libya to the conflict — an allegation confirmed and denounced by Russia and France.

A British-based monitor, the Syrian Observatory for Human Rights, reported at least 28 Syrian rebel fighters had been killed in clashes, claiming there were more than 850 such combatants.