The struggle of blue-collar workers during the COVID-19 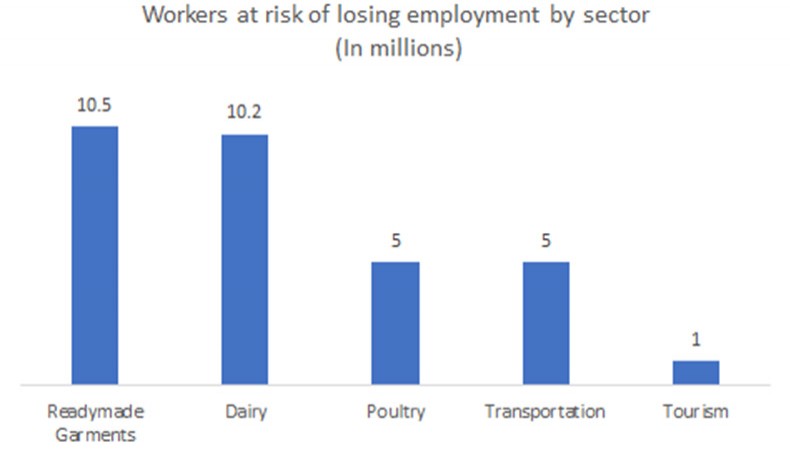 THE pandemic has wielded its influence over almost all the spectrums of the global economy. There have been projections of a massive global recession that can overtake the severity of every possible economic crisis since the Great Depression.

Blue-collar workers are affected the most in the face of this pandemic as a huge number of them are laid off by most of the prominent global economies. In Bangladesh, the economists have suggested putting the blue-collar workers under the umbrella of a social safety net because of the uncertainty that persists with their economic situation.

The 2020-21 fiscal year national budgets are supposed to have comparatively lower spending on the social safety net. Undoubtedly, that is going to drastically impact the whole situation, since about 11.4 million people live under it, and given the situation of most of the blue-collar workers in the major industries, the number is going to skyrocket.

Remittance has been one of the dominant sources of GDP in Bangladesh and it is almost solely due to the widespread occupancy of Bangladeshi migrant workers in the Arabian Peninsula and South East Asia.

As per 2019, remittance has contributed to almost 7 per cent of our GDP as 10 million migrants sent close to USD 18 billion. But due to the strict lockdown stratagems that have been taken in the Middle East, a huge number of workers were laid off from their jobs. Other than that, the depressed demand for oil is one of the major reasons behind the massive curtailing of jobs which, as the aftermath, is one impact of the pandemic. It is assumed that the fall in GDP might be as high as 25 per cent compared to the previous year.

Apparel is another industry that has had a serious downfall entailing the whole situation as most of the factories like Tesco, Sainsbury’s, C, and A and Primark have opened disregarding the lockdown measures taken by the government.

This has been quite detrimental to the health of the workers as a lot of them have been affected by the COVID-19. As of May 1, 2020, about 2000 ready-made garment industries in Bangladesh have resumed production, and the workers who are refusing to join the garments are being laid off.

But the ray of hope in this situation is the government’s department of inspection for factories and establishments has created multiple task forces throughout the country to give the workers a chance to get the basic of the safety measures.

Among the construction workers, as per recent statistics, about 3.5-4 million of the workers were unable to get transactions through digital methods which are why they lost their jobs. Household workers have often been overlooked when the whole job market is concerned but a majority of them are either quitting their jobs or getting laid off from their present positions.

Other than this, shop workers who contribute to about 12 per cent of the labour population have suffered due to the lockdown measures taken by the government and more specifically owners of small and medium shops have been the worst victims of this pandemic.

The working-class of both the urban and rural societies of Bangladesh have been hit hard by the whole situation. According to recent statistics by the Bangladesh Institute of Development Studies, the income drop for the urban labour class is as high as 80 per cent. This plight of blue-collar workers has not been exclusive only to Bangladesh but it is widespread throughout the world.

According to Bloomberg Economics, 6 million jobs are on the line in the United States of America and most of them are blue-collared jobs, this has been the worst situation of unemployment since the Great Depression.

A plethora of measures has been suggested to tackle the situation by economists. Re-skilling the workers is one measure that has been suggested a lot because most of the blue-collar workers are not proficient at the type of skills that are going to be fundamental in the post-pandemic recession ridden job market. Besides, social safety net measures need to be enhanced for the blue-collar workers as it has been introduced in a lot of developed countries of the world in an attempt to uphold this economic class.

Alternative measures like resorting to supply-side economics might be an option to pull the unemployed workers out of the financial abyss since it would cater to the market demand when it comes to production and the post-pandemic market situation is going to be completely different as a lot of means of production is going to change.

Executing new revenue and pricing patterns can be remarkably instrumental in augmenting the cash flow in the market, which in turn might factorise more employment opportunities when admitted from the viewpoint of the supply-side.

One notable illustration of such a recovery is the 2008 recession, although the magnitude of this recession is conjectured to be quite offbeat from that one, this can be one of the becoming measures. Other measures like subsidising the programmes that are supposed to alleviate poverty among the labour populace can also be regarded.