Bangladeshi in the Arctic 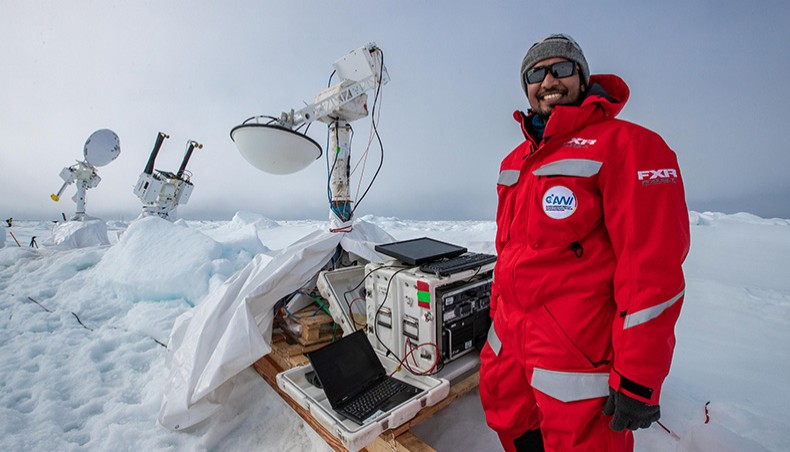 Mallik Sezan Mahmud, a PhD candidate at the University of Calgary in Canada recently came back from a four-month-long scientific expedition in the central Arctic. He is one of the first Bangladeshi nationals to take part in such a scientific endeavour in one of the most unexplored parts of the earth. Mahmud shares his experiences during the Multidisciplinary drifting Observatory for the Study of Arctic Climate (MOSAIC) expedition and how studying the massively changing arctic research is vital for the future. Monojit Saha takes Mallik’s interview for the New Age Youth

New Age Youth: Why the Arctic? Why do you think it is necessary to study the changes in the Arctic?

Mallik Sezan Mahmud: THERE is a popular saying that what happens in the Arctic doesn’t stay in the Arctic. The Arctic has massive impacts on global weather processes. Studies have shown that the Arctic is becoming warming twice as fast in comparison to the rest of the world, which means that this is inevitably linked to climate change.

While different climate models give fairly well predictions about the rest of the world, it is very difficult to model the Arctic atmospheric and biogeochemical interactions because of the lack of observational data directly from the Arctic.

New Age Youth: Please tell us about the Multidisciplinary drifting Observatory for the Study of Arctic Climate (MOSAIC) expedition that you just came back from. Why is it important?

Mallik Sezan Mahmud: MOSAIC is the largest Arctic scientific expedition in the history involving funds from over 20 countries and over 300 researchers being involved in different phases of the expedition.

It is the first year-long comprehensive research initiative that will provide different research data which will help build more realistic climate models for the world. Having ground observational data is very vital for climate models which will give us indications of possible climate change scenarios and associated impacts.

The expedition started from September 1, 2019, and will continue till October 2020. It will involve four legs with different researchers being involved in each leg. I was part of the leg three of the expedition.

We were taken aboard the German research vehicle RV Polarstern which was allowed to freeze up in the central Arctic. The ship then drifted across the Arctic region allowing us to take different atmospheric and oceanographic measurements for different seasons across the central arctic.

The expedition attempted to study different physical parameters from 3.5 kilometres underwater to 20-25 kilometres up in the atmosphere.

New Age Youth: What was your role in the expedition?

Mallik Sezan Mahmud: THE expedition had divided into several teams including the Atmosphere team, sea-ice team, Bio-geochemistry team, ocean team and ecology team. I was part of the sea-ice team. We validated different sea-ice parameters observed from satellite observations with ground measurements. So we will have better observations on where the sea-ice is located, how thick it is and other parameters.

New Age Youth: You are one of the first Bangladeshi national to set foot in an arctic scientific expedition. How does that make you feel?

Mallik Sezan Mahmud: WHILE Bangladesh was not one of the 20 nations taking part in the expedition, I always made sure that everyone knew about my roots and it was a great pleasure to represent Bangladesh. I made a gesture of taking a photo with the national flag of Bangladesh in the Central Arctic which was a highlight of the expedition for me.

It is always important to leave a mark and let people know about the fact that I am from a tropical country like Bangladesh working in the Arctic and it is a matter of great national pride.

New Age Youth: What were some of the personal challenges that you had to face during the expedition?

Mallik Sezan Mahmud: THE COVID-19 pandemic brought a huge challenge to the year-long expedition as flights were cancelled and special arrangements were needed. The decision was very difficult whether I should prioritise science and embark on the expedition or stay back and support my family in these difficult times.

I was completely isolated from the rest of the world, unaware about the latest updates on the pandemic. I only had limited email address and had to use satellite phones for short phone calls to my wife and parents. When I left at the end of April, the pandemic was at its peak intensity and the situation was getting worse in Dhaka. I was very anxious about my parents as there was no way for me to give them support if needed.

It was also very difficult for my wife, Zerin Marzan who had to stay back alone in Canada in this pandemic. However, they all made sacrifices so that I could pursue my love for science. Without their unconditional support, participating in this historic expedition would nearly be impossible for me.

New Age Youth: How are the findings from the Arctic important for a tropical country like Bangladesh?

Mallik Sezan Mahmud: ARCTIC sea-ice melting is linked to global sea-level rise, therefore, forecasting the melting trends and associated possible rise in sea level is vital for a low-lying deltaic country like Bangladesh. There was a German team who had studied Bangladesh’s monsoon patterns and now comparing these findings to the changes in the Arctic.

I believe there will be a good result linking Arctic processes to the South Asian monsoon. Besides, the melting of sea ice in the Arctic has led to the possibility of opening up of the northern sea-route which is expected to reduce sail time between Asia and Northern Europe.

China is particularly interested to explore such routes meaning there will be changes in global shipping routes. Bangladesh needs to assess its strategic position if the northern sea routes to replace the existing route through the Suez Canal.

We can expect changes in the Arctic to have global impacts geopolitically and in the global climate which will inevitably impact the future progress of Bangladesh.

Monojit Saha is a student of the University of Dhaka.