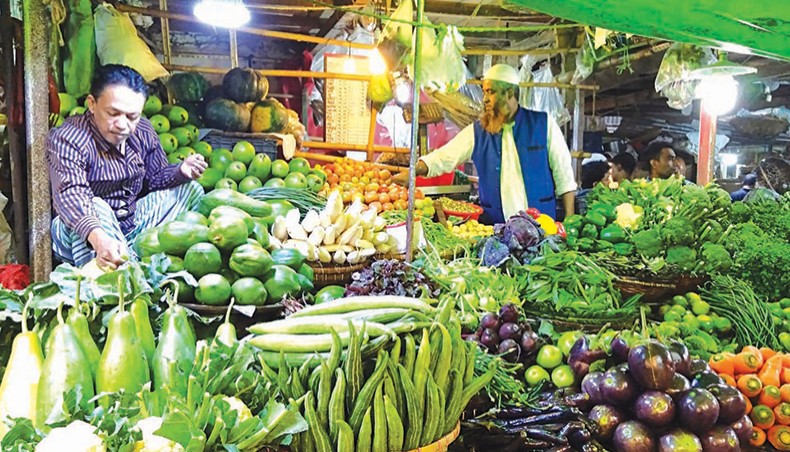 A vendor arranges vegetables at a kitchen market at Kaptan Bazar in the capital on Friday. — New Age photo

The prices of commodities remained high on the city’s kitchen markets over the week, pushing fixed income groups into further hardship amid the coronavirus outbreak.

Consumers expressed their anger over the continuous price hike of essential commodities on the city markets as the virus outbreak has eroded their incomes or cost them their jobs.

Vegetables became dearer on the city markets over the week.

The prices of onion and ginger remained high over the week.

The price of garlic remained unchanged over the week. The imported variety retailed at Tk 90-100 a kg while the local variety sold for Tk 100-120 a kg in the capital on the day.

Middle-income and lower-income groups were both struggling to make ends meet with their household incomes reduced or family members losing jobs during the coronavirus outbreak.

Many middle-income families living in the cities have had their household incomes visibly reduced amid pay cuts and job cuts during the period.

Coupled with a price hike of essential items on the city markets, these families were cutting down on food and other consumptions to ride out the outbreak.

Ishrat Hossain, who works as a teacher at a school in the capital, said that her family had halved their food consumption in recent weeks as her husband’s and her incomes were fixed but the prices of most essential items had soared on the city’s markets.

The prices of rice still remained high on the city markets despite the government setting the mill gate rate of the staple food on September 29.

The fine variety of Najirshail rice retailed at Tk 60-65 a kg and the coarse variety sold for Tk 44-48 a kg on Friday.

A World Bank report titled ‘Losing Livelihoods: The Labour Market Impacts of COVID-19 in Bangladesh’ published in September said that to cope with the income losses, 69 per cent households reduced their food consumption while the same number of people took help from their friends.

Another survey conducted in April by Power and Participation Research Centre and BRAC Institute of Governance and Development found some 40 per cent of poor population and 35 per cent vulnerable non-poor have already reduced their food consumption to cope with the outbreak and its impacts.

A follow-up on the survey conducted in June found that 30 per cent households in the moth reduced food consumption to cope with the decline in income, very little change from April.

The price of eggs remained high as well with each hali or four pieces selling for Tk 36-38 on Friday.

The situation is far more severe for lower-income groups who have either lost all means of livelihood during the outbreak or seen their incomes reduced drastically since March.

Faced with increased costs and reduced incomes, lower-income groups have been compelled to make severe cuts in their daily food consumption which has been further aggravated by the price hike of essential items, especially that of rice.

‘My income has halved in the last five months as flat owners do not allow me to enter their houses due to the pandemic but the prices of daily essentials continue to rise during the period,’ Khadija Akter, a domestic worker, told New Age on Friday.

She said that she was the only bread earner in a household of three members who living in much hardship due to the rise in commodity prices.

The prices of fish remained unchanged over the week.

The price of potato remained high and the item sold for Tk 40 a kg in the city.

Mohammad Helal, a security guard working at an apartment at Mohammadpur in the city, said that traders were increasing the prices of daily essentials at will due to lack of government monitoring.

The government should think about the difficulties of lower income groups during the pandemic, he said.