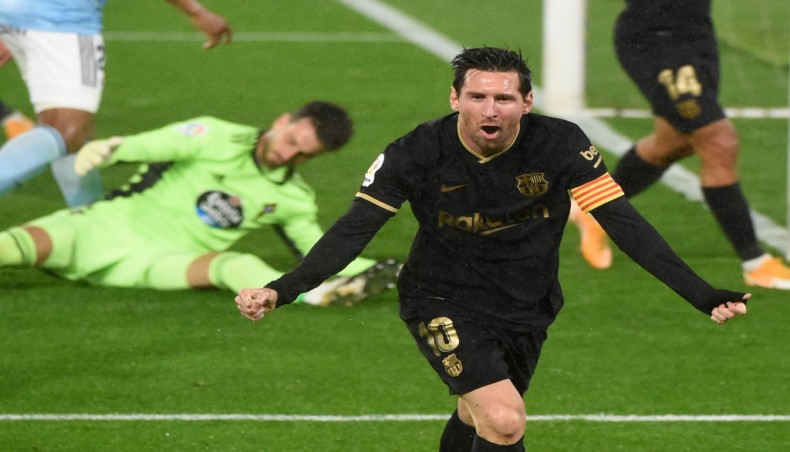 Barcelona forward Lionel Messi celebrates after Celta Vigo defender Lucas Olaza scored an own goal during their La Liga match at the Balaidos stadium in Vigo on Thursday. — AFP photo

Barcelona's new double-act delivered again as Lionel Messi and Ansu Fati led them to a 3-0 victory at Celta Vigo in La Liga on Thursday, despite Clement Lenglet being sent off in the first half.

After scoring twice in Barca's opening game of the season, Fati fired struck early at a blustery Balaidos, only for Lenglet to collect a second yellow card in the 42nd minute for pulling back Denis Suarez.

But even down to 10, Ronald Koeman's side were undeterred and Messi made the lead more comfortable shortly after half-time, his weaving run and shot diverted in for an own-goal by Lucas Olaza.

Celta hit the crossbar but never really threatened a comeback and when the ball spilled loose after another Messi dash in injury-time, Sergi Roberto made sure of the points.

‘We did a great job,’ said Koeman. ‘I'm very proud of this team, we worked hard, played with a lot of discipline with a man less and even then we made the best chances. I'm very, very happy.’

Victory makes it two wins out of two for Barcelona, who began by thrashing Villarreal 4-0 on Sunday yet this was arguably a more impressive performance, and not just because of the numerical disadvantage.

Fati dazzled again. The 17-year-old continued his brilliant start to the season with another smart finish and he offered the kind of pace and penetration that this team so often lacked last term.

Philippe Coutinho, meanwhile, looked back to the Coutinho of old. Deployed in a more central attacking position in Koeman's 4-2-3-1 system, the Brazilian was aggressive without the ball and adventurous with it He was unlucky not to score in the second half when his shot cannoned back off the post.

Perhaps most encouraging for Koeman was seeing the likes of Fati and Coutinho shine on a night when, in truth, Messi was not at his best, even if his display included two superb runs, both of which led to goals.

Koeman welcomed Messi saying this week he wanted to put an end to his ‘disagreements’ with the club while good performances like these are perhaps most likely to convince the Argentinian the club is moving forward.

Celta, who only just escaped relegation last season, may not have offered the stiffest examination but they have an excellent record at home against Barca, who could easily have caved after Lenglet's red card.

Lenglet will be suspended for the game against his former club Sevilla on Sunday.

Fati opened the scoring in the 11th minute after Coutinho played a quick pass following a poor clearance from Jeison Murillo. Allowing the ball to roll across his body, Fati manoeuvred it away from Joseph Aidoo and with the outside of his right foot, steered inside the corner.

Gerard Pique was lucky not to be sent off, spared because Suarez was offside, but Lenglet paid the price for planting a hand on Suarez's shoulder as he looked to pull away.

Messi helped to make it two after half-time, darting away from three Celta defenders before his shot took a cruel deflection off Olaza and crept inside the post.

He thought he had scored again after Coutinho's shot came back to him off the woodwork and in the 95th minute, it was the 33-year-old's run and shot that fell to the feet of Sergi, who smashed in for a third.