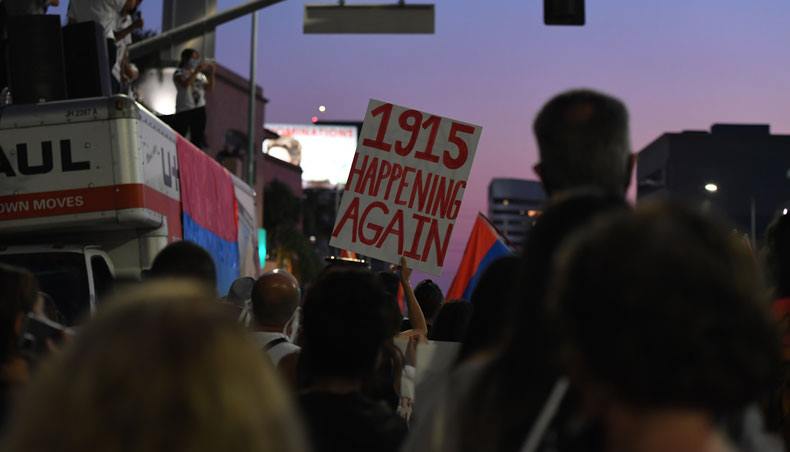 A person holds a placard during a protest organised by the Armenian Youth Federation outside the Azerbaijani Consulate General in Los Angeles on September 30, 2020 to protest what they call Azerbaijan's ‘aggression against Armenia and Artsakh’ — AFP photo

Armenia and Azerbaijan vowed to keep fighting and rejected international calls for negotiations on Wednesday as clashes over the disputed Nagorny Karabakh region raged for a fourth day.

In the breakaway province’s capital Stepanakert, two explosions were heard around midnight as sirens sounded. Residents said that the city had been attacked by drones.

Streets were dark with public lighting shut off, although some shops were open in the city, which local authorities said that came under fire when fresh violence erupted on Sunday.

Moscow said that Russian president Vladimir Putin and his French counterpart Emmanuel Macron had called for a ‘complete’ halt to fighting in Karabakh and said that they were ready to intensify diplomatic efforts to help solve the conflict.

‘Vladimir Putin and Emmanuel Macron called on the warring sides to halt fire completely and as soon as possible, de-escalate tensions and show maximum restraint,’ the Kremlin said.

In a telephone call, the two leaders expressed ‘readiness’ to see a statement made on behalf of the co-chairs of the Minsk Group — Russia, France and the United States— that would call for an ‘immediate’ end to fighting and start of talks, it added.

Armenian and Azerbaijani forces were engaged in the heaviest fighting in years over Karabakh, an ethnic Armenian province that broke away from Azerbaijan in the 1990s when the Soviet Union collapsed.

The confirmed death toll surpassed 100 people including civilians on Wednesday, with both sides claiming to have inflicted heavy losses on the other.

Baku and Yerevan had ignored mounting international pressure for a ceasefire, sparking fears the conflict could escalate into all-out war and draw in regional powers like Turkey and Russia.

‘We need to prepare for a long-term war,’ Karabakh separatist leader Arayik Harutyunyan said on Wednesday.

Moscow, which had a military pact with Armenia but also good ties with Azerbaijan, had repeatedly called for an end to the fighting and on Wednesday offered to host negotiations.

In separate phone conversations with his counterparts from both ex-Soviet countries, Russian foreign minister Sergei Lavrov reaffirmed Moscow’s ‘readiness’ to organise a meeting.

But neither leader showed signs of being ready for talks.

If ‘the Armenian government fulfils the demand, fighting and bloodshed will end, and peace will be established in the region,’ he said while visiting wounded soldiers.

Armenian prime minister Nikol Pashinyan said that it was not ‘very appropriate’ to speak of negotiations ‘at a time of intensive hostilities’.

In the Armenian capital Yerevan, dozens of men gathered outside a recruitment office to join the fight.

‘We must act to defend our homeland against the aggressor,’ said Kamo, a 32-year-old factory worker, adding,‘This is our land. We will die before we abandon it.’

There had been no let-up in the fighting since the weekend, with both sides reporting new civilian casualties on Wednesday.

Armenia claimed that Azerbaijan had lost 130 troops while another 200 were wounded.

Karabakh’s defence ministry, for its part, said that Azerbaijani forces ‘continued artillery shelling’ along the frontline.

The two sides had accused each other of targeting civilian areas, including some away from Karabakh.

Yerevan claimed that Turkey, a longstanding ally of Azerbaijan, was providing direct military support for Baku.

It said on Tuesday that a Turkish F-16 flying in support of Baku’s forces had downed an Armenian SU-25 warplane, but Ankara and Baku denied the claim.

There had been reports of Turkey sending fighters from Syria, where Ankara was allied with some rebel groups, to join the Azerbaijani side.

Russia’s foreign ministry said that ‘fighters of illegal armed groups including from Syria and Libya’ were being deployed to the conflict zone.

It said that it was ‘deeply concerned’ but did not say who was responsible or lay any blame.

‘We are definitely very close to seeing a large-scale war, possibly even on a regional scale,’ said Olesya Vartanyan of the International Crisis Group.

Karabakh’s declaration of independence from Azerbaijan sparked a war in the early 1990s that claimed 30,000 lives, but it was still not recognised as independent by any country, including Armenia.

Talks to resolve the conflict largely stalled since a 1994 ceasefire agreement.