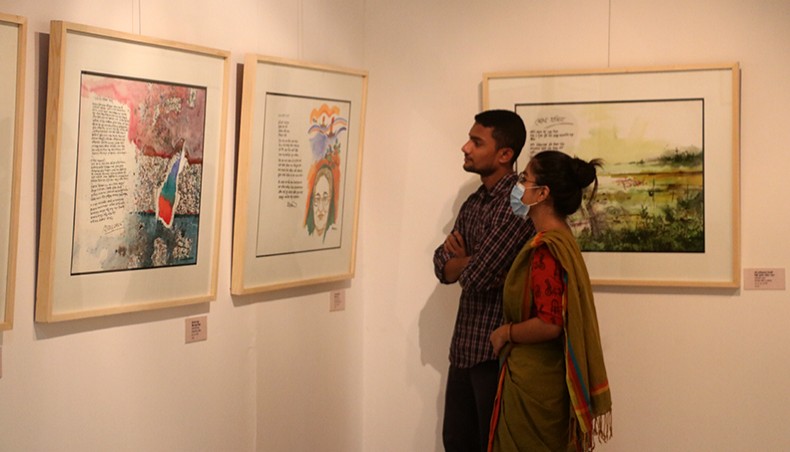 Bangladesh Shilpakala Academy, in association with cultural affairs ministry, has organised the exhibition marking the 74th birthday of Sheikh Hasina.

State minister for cultural affairs KM Khalid, eminent novelist and writer Selina Hossain and secretary to the ministry Md Badrul Arefin attended the inaugural ceremony which was held at the auditorium of National Art Gallery on September 28.

BSA director general Liaquat Ali Lucky presided over the programme which was anchored by Nobonita Chowdhury.

The exhibition features works by 144 artists. More than 200 artworks and an installation portraying Sheikh Hasina’s personal, political life and contribution to the country have been created by both emerging and acclaimed artists. The works are on display at National Art Gallery 3, 4 and on the premises of the National Art Plaza of the BSA.

Another segment features a total of 14 artworks that have been created using paper, ink and watercolour by 14 prolific Bangladeshi artists based on 14 poems by leading poets of the country.

Each work is accompanied by the poem it is based on.

Hashem Khan has created an artwork based on Tarik Sujat’s poem ‘Ajhor Brishtite’. It depicts Sheikh Hasina smiling while several hands are seen waving at her.

The artworks at gallery 3 comprise a total of 134 paintings made at another BSA-organised art camp titled ‘Sheikh Hasina: Bangladesh-er Swapna-Sarathi’.

Shurubhi Akter’s ‘Shaishab Smrity’ is a portrait of Sheikh Hasina being held as a child by her grandparents.

Abdur Rob Khan’s ‘Shanskritir Bandhu’ depicts Sheikh Hasina as an admirer of cultural activities. In the work, she is flanked by two children wearing colourful costumes.

Additionally, the event features an exclusive installation at the plaza of National Art Gallery, created by 12 renowned artists as a tribute to Sheikh Hasina. It was planned and executed by BSA director general Liaquat Ali Lucky and coordinated by artist Abhijit Chowdhury.

The exhibition will end on October 27.