Minni, 5 others sentenced to death in Rifat murder 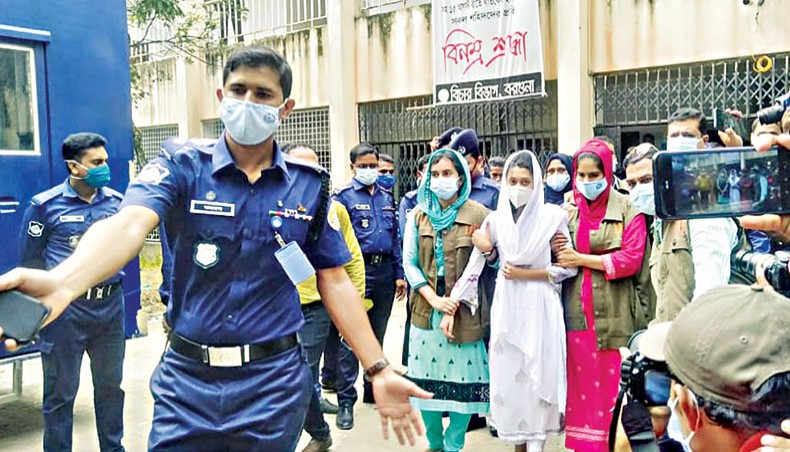 Police take Ayesha Siddika Minni to Barguna jail on Wednesday after the District and Sessions Judge Court sentenced her to death for her role in the killing of his husband Rifat Sharif. — Focus Bangla photo

The Barguna District and Sessions Judge’s Court on Wednesday sentenced six people, including the victim’s widow Ayesha Siddika Minni, to death for murdering Rifat Sharif in broad daylight in front of Barguna Government College on June 26, 2019.

Judge Md Asaduzzaman of the court announced the verdict amid pindrop silence in the courtroom while security was beefed up in and around the court.

The court additionally fined the convicts Tk 50,000 each.

The court also acquitted four of the accused — Md Musa, 22, Rafiul Islam Rabbi, 20, Md Sagar, 19, and Kamrul Hasan Saymun, 21, as the allegation against them were not proved.

Acquitted Md Musa faced the trial in absentia as he remained in hiding after the murder and the court recalled its arrest warrant against him.

The court, giving its decision regarding 10 adult accused in the case, said that all the convicts had liberty to appeal against the verdict within seven days.

All but Musa were in the dock and showed no emotion when the verdict was announced, a lawyer present in the court said.

He said that the court found that the murder was committed in a pre-planned manner.

The lawyer said that the court found that Minni made the victim waste time after he came on a visit to Minni’s college and when the victim fell into the clutches of the offenders, her pace seemed very normal at first as she walked towards the scene of the attack.

The court observed that the incident had defeated the barbarity of the ‘medieval age’ and that if the offenders were not punished appropriately, the youths would be destroyed, he said.

Only the lawyers from both sides and a few journalists were allowed during judgment delivery to ensure social distancing in the courtroom due to the COVID-19 crisis.

Immediately after pronouncement of the verdict, district public prosecutor Bhuban Chanda Hawlader on the court premises said that justice was established through the verdict and his team was happy with the outcome.

He told New Age that they could prove that Minni was the mastermind of the murder and she together with Sabbir Hossain Nayan alias Nayan Bond planned to kill Rifat Sharif.

Minni had secretly married Nayan Bond before her marriage with Rifat Sharif, he said.

Nayan Bond, the prime accused in the case lodged  by Rifat’s father Abdul Halim Dulal Sharif on June 27 naming 12 accused and unidentified others, was killed in a reported gunfight with the police on July 2, 2019.

The court in its verdict mentioned that Minni phoned the prime accused Nayan Bond 44 times and Nayan Bond phoned Minni 16 times in one month until the murder, said the plaintiff’s lawyer Mujibul Huq Kislu, adding that the two exchanged short messages over cell phone several times during the period.

He said that the court found that Minni was busy with resisting Nayan Bond from attacking rather than protecting her husband.

Abdul Halim Dulal Sharif, in his immediate reaction after the verdict, said that he and his family members were happy with the verdict as the real offenders received appropriate punishment.

He demanded early execution of the verdict after completing all legal processes within the shortest possible time.

Minni’s lawyer Mahabubul Bari Aslam said that his client was aggrieved with the verdict and would appeal challenging the verdict.

He said that the court in its judgment mentioned that Minni tried to save her husband.

Her father Mojammel Hossain Kishore, while leaving the court premises said that they were not satisfied with the verdict and that her daughter was a victim of conspiracy.

‘We faced injustice and we will appeal against the verdict,’ he said.

Relatives and neighbours of Rifat as well as people from different quarters gathered around the court premises to hear the news of the verdict.

Relatives of the convicts, who came to the court premises to hear the court’s decision, broke in tears after hearing the verdict.

The trial of 14 juvenile accused in the case is under trial in the Barguna Juvenile Court and the case is scheduled for closing arguments from October 5 to October 7, said the plaintiff’s lawyer M Mujibul Huq Kislu.

Of the 14 juvenile accused, eight are now out on bail and six are in jail, he said.

Rifat, an internet service provider by profession, was hacked indiscriminately in front of his wife Ayesha Siddika Minni who tried to prevent the attackers on June 26, 2019 morning, according to a video circulated on social media after the murder.

Critically injured Rifat Sharif was rushed to Barguna Sadar Hospital from where he was shifted to Sher-e-Bangla Medical College Hospital where he died later in the evening.

On June 27, 2019, Rifat’s father Abdul Halim Dulal Sharif lodged a case with Barguna police station naming 12 people and several other unidentified accused while mentioning Minni’s name as the main witness in his case.

On July 16, 2019, police arrested Minni in the case, took him in their custody for interrogation for five days and she confessed to her role in the murder to Barguna Senior Judicial Magistrate Court on July 20, 2019.

On September 2, 2019 investigation officer Humayun Kabir, an inspector at Barguna Sadar police station, filed two charge sheets with the Barguna Senior Judicial Magistrate’s Court in the case — one naming 10 adults aged above 18, including Minni, and the other against 14 juveniles aged below 18.

Nayon Bond’s name was excluded as he was killed before submission of the charge sheet.

The 10 adult accused were indicted on January 1.

Their trial began on January 8 and ended on September 16.

During the trial, 76 prosecution witnesses were examined.