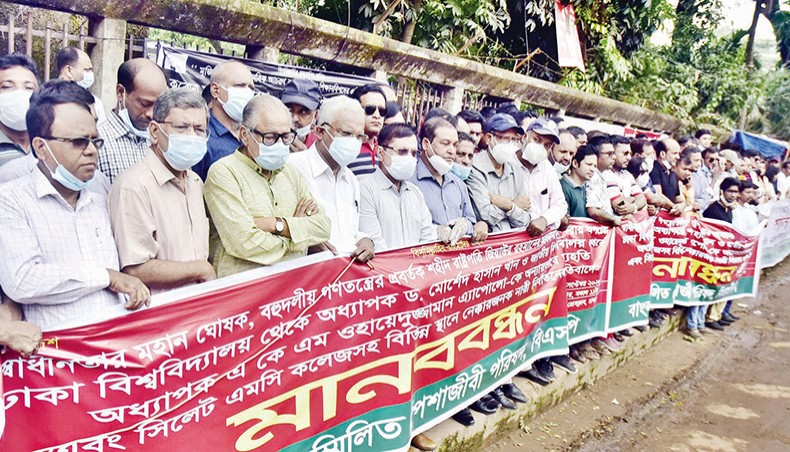 Bangladesh Sammilita Peshajibi Parishad members form a human chain in front of the National Press Club in Dhaka on Tuesday in protest against bids to undermine the contribution of former president and BNP founder Ziaur Rahman. — New Age photo

Bangladesh Nationalist Party secretary general Mirza Fakhrul Islam Alamgir said on Tuesday that repressions against religious and ethnic minorities had started in the country during the Awami League rule just after the independence war.

In September 29 and 30 in 2012, a series of attacks on Buddhist monasteries, shrines and houses were carried out at Ramu in Cox’s Bazar.

The violence later spread to Ukhiya in the district and nearby Patiya in Chittagong where Buddhist monasteries and other religious establishments were ransacked and centuryold manuscripts were torched. But no one was punished for the offence, he lamented.

Eighteen cases filed with three police stations in Cox’s Bazar in 2012 are still underway, he added.

Referring to the attacks at Ramu, Mirza Fakhrul said such attacks had increased in the country as the Awami League did not believe in democracy nor did they recognise the rights of the people.

The Awami League had imposed a fascist rule and seized the voting rights of people, Fakhrul said.

He called on the people to be united for formation of a national unity and to begin movements to end the fascist rule of Awami League.

Standing committee member of the party Gayeshwar Chandra Roy said that the trials of Ramu tragedy would be completed and the responsible would be punished if BNP comes in power.

Former Dhaka University teacher Sukomal Barua said that the Buddhists did not get justice of Ramu tragedy.

BNP vicepresident Nitai Roy Chowdhury called on the religious minorities to extend their support for establishing their rights.