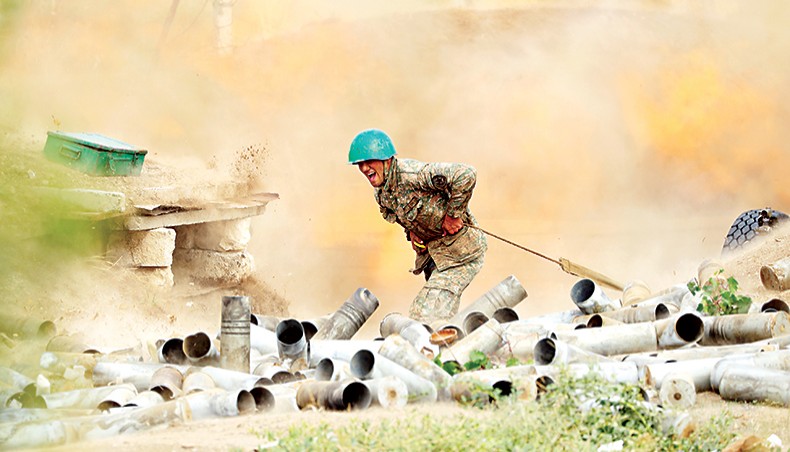 A serviceman of Karabakh’s Defence Army fires an artillery piece towards Azeri positions during fighting over the breakaway Nagorny Karabakh region on Monday. — AFP photo

Azerbaijani and Armenian forces claimed to have inflicted heavy losses as fighting raged for a third day on Tuesday over the breakaway region of Nagorny Karabakh.

Urgent calls from world leaders for a halt to the fierce clashes that erupted on Sunday have gone unheeded by the ex-Soviet rivals, who have been locked for decades in a territorial dispute over Karabakh.

The UN Security Council was scheduled to meet Tuesday for emergency talks on the military escalation over the ethnic Armenian exclave, where intense fighting in recent days has caused nearly 100 confirmed deaths.

Both sides said fighting was continuing on Tuesday, despite international pleas for a ceasefire.

Armenian defence officials said separatists in Karabakh had repelled Azerbaijani attacks along the frontline and that ‘the enemy suffered serious losses in manpower’.

The defence ministry in Yerevan said Azerbaijan’s military had suffered major losses since the clashes erupted, with nearly 50 drones and four helicopters downed, and 80 tanks destroyed.

Defence officials in Azerbaijan’s capital Baku in turn dismissed claims by separatist fighters that the Armenian-backed troops had regained control of territory in Karabakh lost in fighting Sunday.

They said ‘fierce fighting’ had persisted in the early hours of Tuesday and that their military had repelled an Armenian counterattack, destroying ‘an Armenian motorised column and an artillery unit’ and, later, an entire motorised infantry regiment.

‘The enemy... asked for help to evacuate corpses and wounded troops’ from the battlefield, it said.

The fighting between majority-Muslim Azerbaijan and Christian Armenia is threatening to draw in Turkey and Russia — the main powerbrokers in the Caucasus region — who back opposing sides of the conflict.

Yerevan is part of a military alliance of former Soviet states led by Moscow and Russian leader Vladimir Putin has called for a halt to the fighting.

Ankara backs Azerbaijan and has been accused of sending mercenaries from northern Syria to bolster Baku’s army, while Turkish president Recep Tayyip Erdogan said Monday it was time for the longstanding dispute over Karabakh ‘to be put to an end’.

Azerbaijan has not reported military casualties, but the separatist government has released footage from the battlefield showing what it said was the remains of Azerbaijani soldiers.

That brings the total confirmed deaths in the fighting to 98 — including 84 separatist fighters and 14 civilians.

Observers to the conflict have urged the international community to ramp up efforts aimed at finding a political solution.

The UN Security Council meeting, which was formally requested by Belgium after France and Germany led a push for it to be added to the agenda, will be held at 5:00 pm local time in New York (2100 GMT), diplomats said.

German chancellor Angela Merkel has ‘urgently called for an immediate ceasefire and a return to the negotiating table,’ her spokesman said Tuesday, after she spoke with Aliyev and Armenian prime minister Nikol Pashinyan.

Karabakh’s declaration of independence from Azerbaijan sparked a war in the early 1990s that claimed 30,000 lives, but it is still not recognised as independent by any country, including Armenia.

Talks to resolve the conflict — which emerged amid the 1991 collapse of the Soviet Union — have largely stalled since a 1994 ceasefire agreement.

France, Russia and the United States have mediated peace efforts as the ‘Minsk Group’, but the last big push for a peace deal collapsed in 2010.