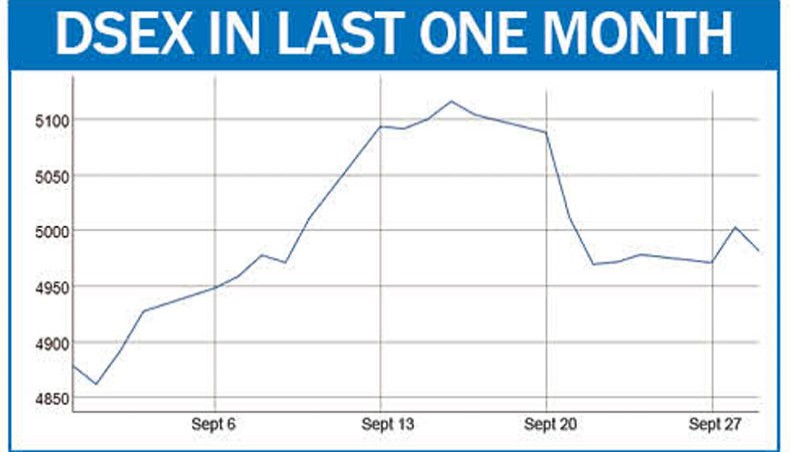 Dhaka stocks dropped on Tuesday after a gain in the previous session as a section of investors went for selling shares to book profits.

After a marginal gain at the beginning of Tuesday’s session, the index moved downwards and finished the session in the negative territory, market operators said.

They said that investors remained undecided on the trading floor as the market witnessed correction in recent days after a three-month rally.

The current slow movement on the market worried a group of investors, they said.

Share prices of the bank and non-bank financial institution sectors declined on the day after their recent gains.

Market operators said that a group of investors became shaky after the Bangladesh Securities and Exchange Commission began to punish the wrongdoers for manipulating share prices.

Besides, a possible second wave of the coronavirus outbreak also made some investors worried, they said.

Due to a speedy economic recovery and a fall in interest rate, the DSEX had gained around 1,150 points within three months before last week.

The rally raised the share prices of most of the companies that encouraged the investors to book profits.

Share prices of Walton Hi-Tech Industries hit the upper limit of the circuit breaker for the fourth day, soaring by 7.49 per cent, to end at Tk 704.3 a share on Tuesday. The company made its debut on September 23.

Besides, unit prices of mutual funds continued gaining on Tuesday as investors anticipated that the sector would revive after the securities regulator initiated to reform the sector.

EBL Securities in its daily market commentary said, ‘The morning buoyancy did not sustain as several investors opted for profit booking selling pressure on sector specific large-cap stocks that witnessed price appreciation in the recent momentum.’

The market participation also declined on Tuesday as some investors remained watchful ahead of forthcoming corporate declarations from listed companies, it said.

The average share prices of non-bank financial institution, bank and energy sectors dropped by 2.1 per cent, 1.0 per cent and 0.98 per cent respectively.

Turnover on the DSE inched down to Tk 853.00 crore on Tuesday compared with that of Tk 879.49 crore in the previous trading session.

Bangladesh Export Import Company led the turnover chart with its shares worth Tk 34.45 crore changing hands on the day.