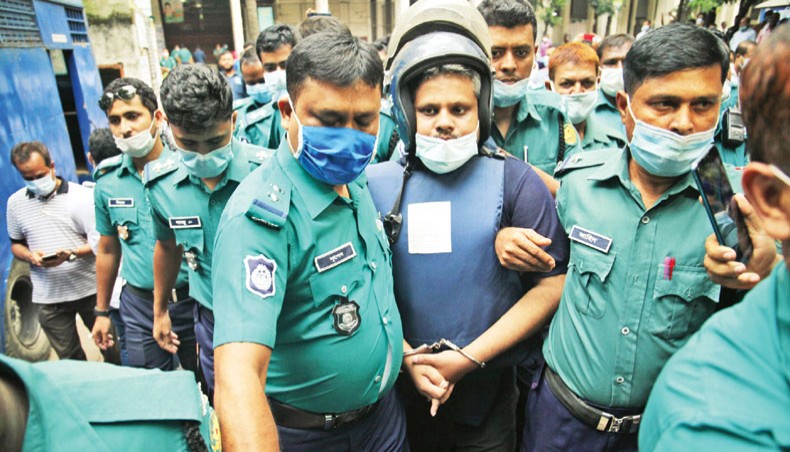 Police take Regent Group chairman Mohammad Shahed to jail from the Dhaka Metropolitan Special Tribuanl-1 on Monday after the court awarded life term imprisonment to him in an arms case. — New Age photo

Tribunal judge KM Imrul Kayes pronounced the maiden verdict on Shahed who has been facing 73 cases on charges of forgery and cheating, including COVID-19 test forgery.

In the verdict, pronounced in presence of Shahed in the dock, the judge said that Shahed was given highest punishment prescribed in the law so that it could send a clear message to others as there were so many people like him in the society.

Eleven prosecution witnesses have testified against Shahed in the court during the trial and they were corss-examined by the defence lawyers.

Regent Group head office and both hospitals were sealed off and 16 people, including the chairman, were prosecuted on charge of issuing fake coronavirus test reports.

The battalion arrested Shahed in Satkhira on July 15 when he was reportedly trying to leave the country for India on a boat.

He was remanded in custody of law enforcers for 38 days for interrogation in five cases.

On July 19, a Detective Branch found Shahed’s car in front of a house at Sector-11 of Uttara in the capital.

The detectives seized a pistol and a bullet from the car and later filed the arms case under the Arms Act against him.

They also filed another case against Shahed under the Narcotics Control Act.

Shahed claimed his innocence before the court during trial.

The Rapid Action Battalion has been investigating some of the major cases against Shahed, including COVID-19 test scam case.

Public prosecutor Abdullah Abu said that the prosecution successfully presented the case against the accused and the verdict was awarded accordingly.

Defence lawyer Moniruzzaman said, ‘We did not get justice and will go to the High Court against the verdict.’

Shahed was also jailed for six months in cheque forgery case in 2010.