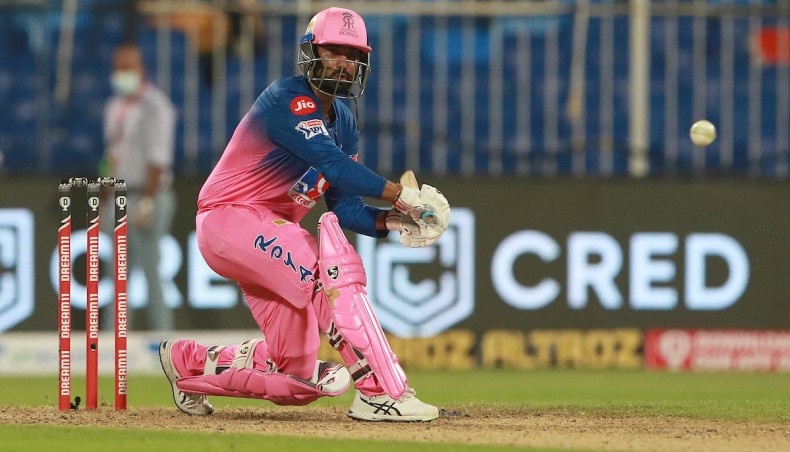 Tewatia, a leg-spin bowler and left-hand batsman, hit the ball over the fence seven times as he made 53 off 31 balls as Steve Smith's Royals, set 224 to win, reached 226 with four wickets and three balls to spare in Sharjah.

Smith hit a quickfire 50 and Sanju Samson top-scored with 85 before Tewatia took the Royals to within one run of Kings XI's 223 for two.

‘I was not hitting the ball well initially, I saw in the dug-out, everybody was curious as they know that I can hit the ball long,’ said Tewatia, who was promoted to number four but struggled at first, scoring eight from 19 balls before he cut loose.

‘It was a matter of one six. After that, I got going. I hit five in an over and it was amazing.’

Tewatia, who has played seven first-class matches, hit West Indies quick Sheldon Cottrell for five sixes - four in a row - in the 18th over to turn the tables at the Sharjah cricket ground, which has short boundaries.

Tewatia finally fell to paceman Mohammed Shami on the last ball of the 19th over but Jofra Archer, unbeaten on 13, and Tom Curran, who hit the winning boundary, saw the Royals home. The previous best chase of 215 was also by the Royals, against the Deccan Chargers in 2008.

Royals were jolted early in their chase when opener Jos Buttler fell for four in his first IPL outing of the season following his quarantine time.

An eye-catching outfield save by Kings XI's Nicholas Pooran to stop a six from Samson stood out in the run fest.

Pooran defied gravity to reach a big hit from Samson going for rope, flicking the ball back inside the playing area while still in mid air.