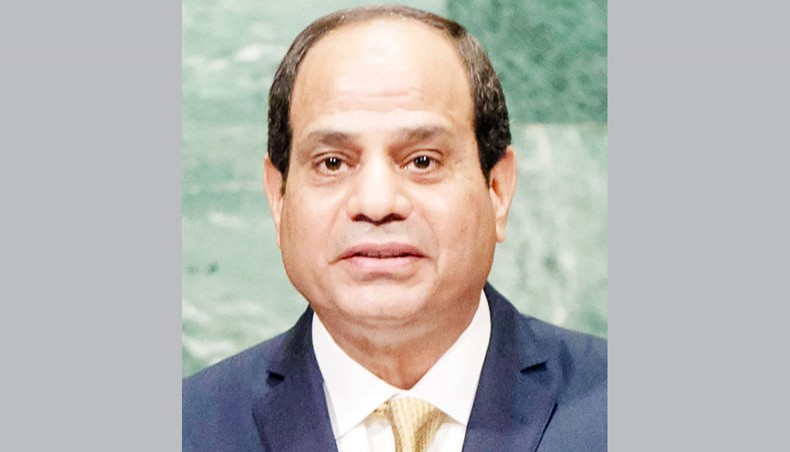 Egypt’s president Abdel Fattah al-Sisi warned on Sunday against attempts to stoke instability in the country, following a recent spate of scattered and small-scale anti-government protests.

‘Some people have been trying in recent weeks to take advantage of the tough measures we are taking,’ Sisi said at a ceremony to inaugurate an oil refining complex north of Cairo.

‘They choose the hard conditions to harm and cast doubts among Egyptians over what we do.’

Dozens of people took part in rare protests in recent days in several villages in Egypt, according to videos shared widely on social media, especially by sympathisers of the Muslim Brotherhood, an outlawed Islamist group.

The small-scale demonstrations come amid mounting anger, particularly in rural and low-income areas, against sweeping government campaigns to stop illegal construction, which have required people to pay fines to legalise home-ownership.

Exiled businessman Mohamed Ali, who has urged anti-Sisi protests since last year, has intensified his calls in recent weeks in online videos, calling on Egyptians take to the streets against the government.

During his speech, Sisi thanked Egyptians for not heeding the calls, saying the government was undertaking the measures as part of reforms.

On Saturday, family and medical sources said a man was killed in clashes between protesters and police in a village south of Cairo.

Prominent rights lawyers also reported on Facebook the arrest of more than 150 people in the demonstrations.

Protests have been effectively banned in Egypt since 2013.

A renewable state of emergency has been in place since 2017, a measure that rights groups say has allowed the government to crush dissent.