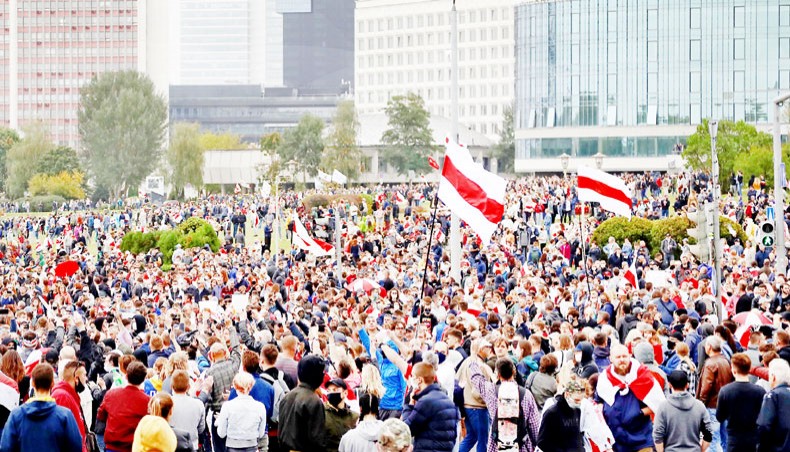 Belarus police on Sunday arrested several people before an opposition march in support of protest figure Svetlana Tikhanovskaya days after the country’s leader was secretly sworn in despite historic protests.

The opposition movement calling for an end to the regime of authoritarian leader Alexander Lukashenko has kept up a wave of large-scale demonstrations every Sunday since his disputed win of an August 9 election.

Protesters began congregating in the capital Minsk at around 2:00pm local time (1100 GMT) and police said ‘several’ people had been arrested ahead of the march.

Several metro stations in central Minsk were closed before the protest, AFP journalists reported, and the Palace of Independence, Lukashenko’s residence, was heavily guarded by riot police and barriers.

Videos on social media showed armoured vehicles and water cannon being deployed to the capital’s streets.

Tikhanovskaya, who claimed victory over Lukashenko in the election and has taken shelter in neighbouring Lithuania, has rallied support from European leaders.

The top opposition Telegram channel, Nexta Live, which has been mobilising protesters and has more than 2 million subscribers, urged Belarusians to take to the streets for a symbolic ‘people’s inauguration of the real president’ Tikhanovskaya.

Lukashenko has dismissed opposition calls for his resignation and sought help from Russia’s president Vladimir Putin, who has promised military backup if needed and a $1.5 billion loan.

Authorities have jailed or forced out of the country many of Tikhanovskaya’s allies who formed the leadership of the Coordination Council that is seeking new elections and the transfer of power.

One of her campaign partners, Maria Kolesnikova, has been imprisoned and charged with undermining national security.

Lukashenko, who has ruled ex-Soviet Belarus for 26 years, has also accused various Western countries and NATO of supporting protesters or trying to destabilise the country.

He put his military on high alert after the vote and Belarus will host war games with several other ex-Soviet countries including Russia next month in what is being touted as a show of force against NATO.

European leaders have said they do not recognise the Lukashenko’s re-election and promised to impose sanctions on Belarus for rigging the vote and waging a post-election crackdown on peaceful demonstrations.

The UK said this week it was coordinating with the United States and Canada on sanctions after EU penalties were stalled by Cyprus.

French president Emmanuel Macron on Monday was scheduled to visit the Baltic states of Latvia and Lithuania, which border Belarus and have expanded their own sanctions on Minsk along with Estonia.

On Sunday, he told the French weekly the Journal du Dimanche he was impressed with the courage of protesters and that it was clear that Lukashenko ‘has to go’.