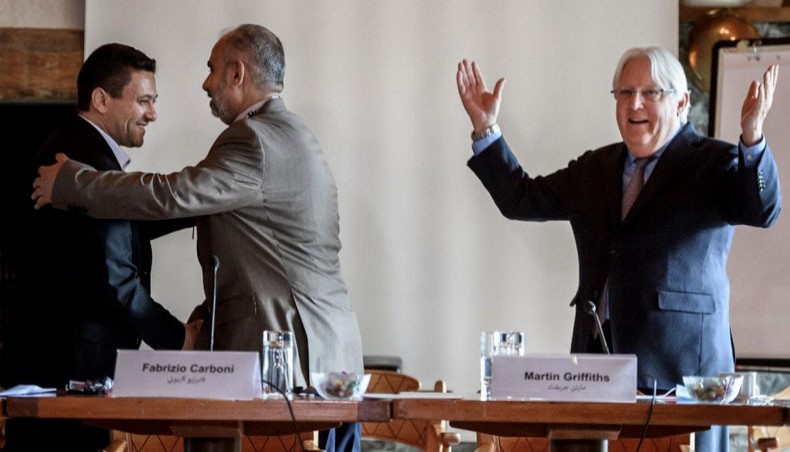 Both sides in Yemen’s war have agreed to exchange more than 1,000 prisoners, the UN mediator said on Sunday following talks in Switzerland.

‘I am personally extremely pleased to be here to announce that you have reached a very important milestone,’ UN envoy Martin Griffiths told reporters.

Speaking at a short ceremony held inside a cabin at the Swiss village of Glion, overlooking Lake Geneva, Griffiths hailed the decision to release 1,081 prisoners as the largest such operation during Yemen’s conflict.

He also congratulated the government, supported by a Saudi-led military coalition, and Iran-backed Huthi rebels for renewing their ‘commitment to the full implementation of the Stockholm agreement’, a 2018 peace deal reached in Sweden to exchange some 15,000 detainees.

The two sides have since carried out sporadic prisoner swaps, but the release of hundreds of loyalists and insurgents — if it materialises — would mark the first large-scale handover since the war erupted in 2014.

‘What matters to us is implementing the deal, not only signing it,’ senior rebel commander Mohamed Ali Al-Huthi tweeted Saturday.

Sources on both sides had said late Saturday that a deal had been reached for the prisoner exchange, indicating it was due to be implemented within two weeks.

The deal includes the release of ‘681 rebels, and 400 government forces and allies, among them 15 Saudis and 4 Sudanese’, a member of the government delegation said.

The talks began on September 18, and had been aimed at agreeing the release of 1,420 prisoners, including the brother of Yemeni president Abedrabbo Mansour Hadi.

Griffiths did not provide details on which prisoners specifically would be exchanged under the agreement reached in Glion.

But the government delegation member said Saturday that the release of General Nasser Mansour Hadi from the hands of the rebels ‘has been postponed’.

The International Committee of the Red Cross will oversee the return of detainees to their families.

Fabrizio Carboni, head of ICRC’s Middle East and Near East operations, was also at the ceremony, describing the agreement as ‘a very positive step’.

‘This release will alleviate the suffering of many detainees and many families who have been waiting for so long to be reunited,’ he said.

‘We are convinced that this release (…) will contribute to renew solid, valid peace talks.’

Tens of thousands of people, mostly civilians, have died in the Yemen conflict, which has sparked what the United Nations calls the world’s worst humanitarian crisis.