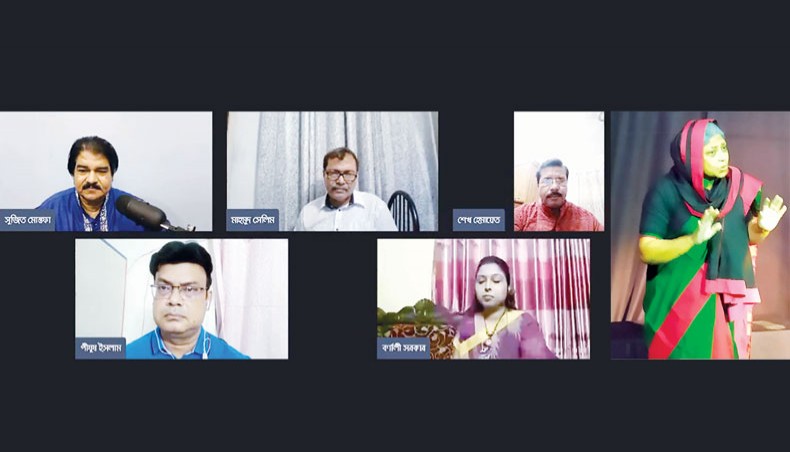 However, a cultural programme and children’s art competition which were scheduled to be held at district collectorate office were postponed due to excessive rain.

‘We were not able to organise the cultural programme due to heavy rain. The people of Kurigram demand a university named after Syed Shamsul Haq along with the beautification his grave,’ SM Abraham Lincoln, Founder of Uttarbanga Museum, told New Age.

Soukhin Theatre staged a play titled ‘Prabhat Phire Eso’ at the hall on Friday. It has been written by Manoj Mitra and directed by Hamidur Rahman Pappu.

‘We opened a theatre hall named after Syed Shamsul Haq in Laxmibazar. The hall is adjacent to the house of the late poet. When we approached his widow Anwara Syed Haq regarding opening the hall, she agreed right away,’ Hamidur Rahman Pappu told New Age.

‘We established the hall to provide theatre artistes a platform. If any troupes want to stage a play at Bangladesh Shilpakala Academy or Bangladesh Mahila Samity, they have to pay taka 3,000 and 5,000 respectively. We are providing the hall at taka 1,200 without light and it can accommodate 50 spectators,’ added Hamidur Rahman.

Besides, Maitri Theatre staged the play titled ‘Cha Athoba Coffee’ at the hall on Saturday. The play has been written by Ramanath Roy and directed by Niaz Ahmed.

Following which, Shabda Natya Charcha Kendra staged ‘Biranganar Bayan’ at the venue. It has been written by Rawshan Jannat Rushmi and directed by Debashish Ghosh.

‘We were not able to oraginse programmes widely marking the day due to COVID-19 crisis. We organised a milad mahfil at the mosque and a dua mahfil was held at our home. My brother-in-law distributed food among the children at an orphanage in Kurigram,’ Anwara Syed Haq told New Age.

‘I am very happy that his novel was published on the day of his death anniversary. The book will give the readers a glimpse into the adverse impact of dog killing in a city,’ added Anwara Syed Haq.