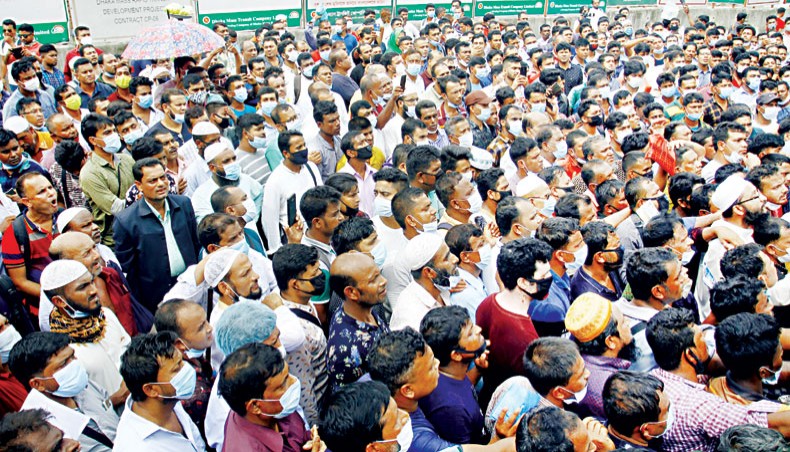 Migrant workers gather on the road in front of the Saudia Airlines office at Karwan Bazar in Dhaka on Saturday for air tickets to Saudi Arabia. — New Age photo

Stranded Bangladeshi passengers of both the Saudia airlines and the Biman Bangladesh Airlines continued struggling to get confirmation of their return tickets to Saudi Arabia till Saturday while Bangladeshi health authorities were struggling to issue Covid-19 certificates in 12 hours.

Airport Armed Police Battalion additional superintendent Alamgir Hossain said that 32 passengers of Saudia flight SV 3807 could not fly on Saturday evening as they showed Covid-19 negative certificates issued by private medical laboratories which were not approved by the government.

The Saudia are now dealing with the passengers, he said.

Shah Jahan of Dhamrai said that his nephew, Nur Islam, collected covid-19 negative certificate from Ibne Sina in Shyamoli but he was not allowed to board the flight at the airport.

Directorate General of Health Services director (MIS) Md Habibur Rahman said that they were struggling to give Covid-19 report to many stranded passengers within 12 hours.

He said that they issued certificates to 700 Saudi-bound passengers in 12 hours on Friday.

‘We have expressed our concern to the civil aviation ministry,’ he added.

Several hundred stranded passengers, mostly migrant workers, on Saturday gathered in front of sales offices of both the airlines in Dhaka and inquired whether and when their tickets would be confirmed.

‘I have been waiting for a week for my return ticket and I got a coupon but not sure when I will get my ticket,’ said Nasir Howlader of Jhalokathi.

He said that he, along with several hundred passengers, approached the Saudia office on Saturday but confirmation of the flight was not announced till the evening.

Hazrat Shahjalal International Airport officials said that on Saturday, two flights of the Saudia and one flight of the Biman carrying 767 passengers in total left Dhaka for Saudi cities of Jeddah and Riyadh until 7:00pm.

‘Although it will be expensive, we will operate the flights to resolve the crisis,’ he said.

The Saudia estimated that at least 30,000 stranded passengers needed to be ferried from Dhaka in the coming weeks while Biman said that it had over 20,000 passengers stranded.

Biman officials said that they were yet to get Saudi approval for operating commercial flights to cities in Saudi Arabia.

Earlier, Bangladesh foreign minister AK Abdul Momen on September 23 claimed that they communicated with the Saudi counterparts to solve the problem.

Civil Aviation Authorities, Bangladesh officials said that the Saudia applied for operating two more weekly fights in addition to their existing two weekly flights to and from Dhaka.

‘Any permission for any additional flight is yet to be given as we want that the flights will be operated in the day time in Bangladesh,’ an official told New Age on Saturday.