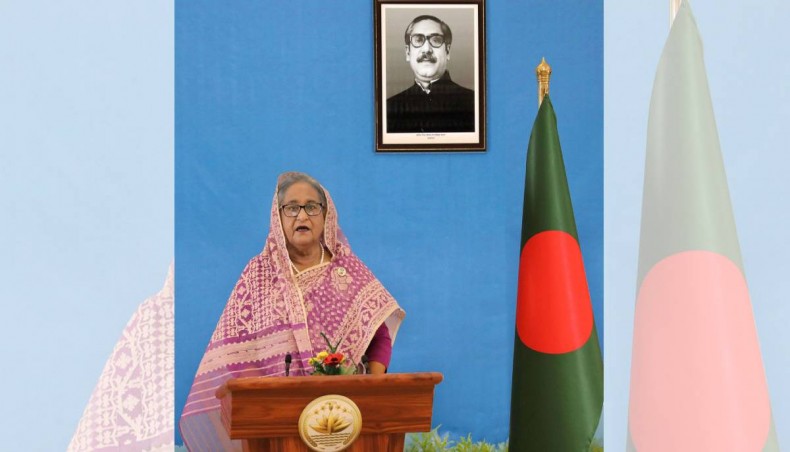 Prime minister Sheikh Hasina on Saturday stressed timely and equitable access to prospective COVID-19 vaccines while addressing the United Nations General Assembly amid a visible trend of ‘vaccine nationalism’ when developed countries are prioritising their access to prospective inoculates ahead of others.

‘We hope that the COVID-19 vaccine will soon be available in the world. It is imperative to treat the vaccine as a ‘global public good’,’ she said in her UNGA statement this year through virtual media.

Sheikh Hasina said ‘the pandemic is a stark reminder that our fates are interconnected and that no one is secured until everyone is secured’ and therefore ‘we need to ensure the timely availability of this vaccine to all countries at the same time’.

The Bangladesh prime minister’s pre-recorded speech came as United Nations stages its 75th UNGA session while the global COVID -19 pandemic forces the global forum to hold the annual assembly of world leaders through the virtual media in New York this year.

She delivered the speech in Bangla as she did in previous UNGA sessions as the prime minister, following the country’s founding president Sheikh Mujibur Rahman’s footprint, Sheikh Hasina informed the UNGA about of higher infrastructural capacity of Bangladesh pharmaceutical industry and said if Bangladesh was provided with the technical know-how and patents, it could launch mass-scale productions of inoculates.

According to global health regulators, researchers are testing 42 vaccines in clinical trials on humans, and at least 93 preclinical vaccines are under active investigations in animals but developed countries were placing orders to vaccine makers for early availability of inoculates causing fears it could prolong the pandemic.

Sheikh Hasina said that the way the Second World War had prompted countries to join their hands to cooperate each other establishing the United Nations, the ongoing pandemic now warranted ‘collective action’ in an identical manner under right leadership.

She informed as well the UNGA Bangladesh’s ongoing development campaign  and efforts to attain the SDG goals and replicable success stories, her government’s zero-tolerance policy towards terrorism and violent extremism and commitment to multilateralism and world peace.

Sheikh Hasina reiterated her call to the world community to play a more effective role in solving the protracted Rohingya crisis saying ‘more than three years have elapsed (but) regrettably, not a single Rohingya could be repatriated’ as Bangladesh provided makeshift shelter to over 1.1 million forcibly displaced Myanmar people.

‘I request the international community to play a more effective role for a solution to the crisis,’ she said and suggested the solution to be explored in Myanmar as the crisis was created by Myanmar.

The Bangladesh prime minister described migrant workers as ‘frontline contributors’ to the economies of their host and home countries alike and therefore they deserved a fair treatment in the countries where they were dedicating their services and an extra-empathy by the host nations and international community particularly during the current pandemic.

Sheikh Hasina said that the ongoing unprecedented crisis in humankind’s history that forced as well the United Nations to stage for the first time its general assembly on digital platform debarring the heads of states physical presence at its New York headquarters.

She said that the situation reflected how the pandemic affected the global economy and health systems while Bangladesh was no exception while the country recorded the record high 8.2 per cent GDP growth in the last fiscal.

But, she said, as the pandemic broke out her government put in its efforts to strike a balance between ‘life the livelihood’, quickly identifying its impending rage on the financial sector and massively expanding the social safety nets coverage.

Sheikh Hasina said that under the initiative food and other assistance was readily arranged for people who are rendered jobless and these arrangements benefitted nearly 10 million families.

‘To ensure healthcare of the common people, we are providing 30 types of medicines free of cost through 18,000 community clinics and union health centres,’ she said.

Moreover, the prime minister said, alongside the government assistance, she herself collected funds and distributed more than an amount of Tk 2.5 billion among orphans, poor students, school teachers, artists, journalists and institutions like madrassahs, mosques, temples, which otherwise were not included in government’s assistance programmes.

‘As a result, the impact of the pandemic among our people has been minimal,’ she said.

She said that the quick situation analysis yielded 21 stimulus packages worth US$ 13.25 billion ‘which is equivalent to 4.03 per cent of our total GDP’ and added ‘we have announced stimulus packages aiming to minimise the impact of the pandemic on our business and productivity.’

The prime minister said that these packages include sectors such as export-intensive industries, safety and security of the workers, working capital for small and medium enterprises, loan facilities for export growth, assistance to farmers and agriculture, loan for employment generation, interest relief for the affected business enterprises, refinancing schemes and insurance for the health workers.

‘These resulted in containment of seasonal diseases which are otherwise common in our country,’ she said.

The prime minister said that the pandemic prompted her government initially to lay highest emphasis on food production and ensure adequate supply of nutrition to people and subsequently special arrangements were made to keep running the essential industries.

She said that services were ensured for proper marketing of agricultural products and industrial outputs in full compliance with health guidelines and as a result of these initiatives ‘our health sector and economy are still comparatively at a better shape’.

Sheikh Hasina said despite the COVID-induced stagnation in global industrial outputs, Bangladesh’s GDP registered a growth rate of 5.24 per cent which, otherwise, however, was expected to be 7 per cent in the next fiscal.

Noting that efforts to contain the pandemic and achieve Agenda 2030 have to go hand-in-hand, Sheikh Hasina said that Bangladesh’s second voluntary national review presented this year shows that the country was well on track to achieve the Sustainable Development Goals.

‘Every year, we allocate around Tk 39 billion for our freedom fighters. Our allowances for the elderly, widows, destitute women, disabled and other backward sections of the society are benefitting approximately 9.1 million families,’ she added.

The prime minister said that the government had provided scholarships to four million students and also given cash incentives to five million people, including farmers, workers and labourers affected by the pandemic.

‘We’re working hard to transform Bangladesh into a middle-income country by 2021, attain the SDGs by 2030, a developed country status by 2041 and a prosperous Delta by 2100,’ she said

She continued, ‘We cannot but emphasise more on the importance of leveraging science, technology and innovation for closing the digital divide and mobilising resources and technology transfer.’

The prime minister said that many of Bangladeshi migrant workers had lost their jobs during the pandemic, while many have been sent back home.

‘We have allocated US$ 361 million for the returnee migrant workers. It is critical to help them regain employment in the post-COVID job market … I urge the international community and migrant receiving countries to treat migrant workers fairly and with empathy during the crisis,’ she said.

Sheikh Hasina said that it was also crucial that graduating LDCs and recently graduated ones were accorded scaled-up international support and incentive packages in the transition and post-transition phases to minimise the pandemic-triggered impediments.

She paid tribute to all frontline fighters including health workers and public servants who are working tirelessly to ensure safety of the COVID-19-affected countries and population. ‘I also commend the United Nations secretary general for his bold leadership and multilateral efforts during this crisis,’ she said.

The prime minister said that the COVID-19 pandemic was worsening the pre-existing vulnerabilities of climate-vulnerable countries. ‘In Bangladesh, we are dealing with the dual impact of recent floods and the cyclone Amphan even during the pandemic,’ she said.

As the current president of the CVF and the V-20 group of ministers of finance, Sheikh Hasina said that Bangladesh would lead the forum to map out a sustainable and climate-resilient pathway out of the crisis.

‘We also stand ready to contribute to securing a constructive and productive outcome in the Glasgow COP,’ she said.

Sheikh Hasina said that the Beijing Declaration and Platform of Action helped the international community come a long way to ensure gender equality.

‘As we are celebrating the 25th Anniversary of the Declaration, we need to strengthen our resolve and mutual cooperation to address all the critical areas of concern,’ she said.

About the women empowerment, the prime minister said that Bangladesh had closed 72.6 per cent of its overall gender gap. ‘Women’s contribution remains at the core of our national development. They are also at the forefront of pandemic response and recovery efforts,’ she said.

Sheikh Hasina said that Bangladesh was implementing special programmes for the development of children. ‘As the current president of the UNICEF executive board, we are leading efforts to address the existing disparity. At the same time, we remain vigilant to ensure that this health crisis does not turn into a children’s crisis,’ she said.

Sheikh Hasina said that currently, Bangladesh was the largest troops and police-contributing country in the world to the peacekeeping missions.

‘Our peacekeepers are putting their lives on the line to secure and sustain peace in conflict-ravaged countries. International community must ensure their safety and security,’ she said.

The prime minister called for due recognition of women’s role in peace and security, saying, ‘This year we are celebrating the 20th Anniversary of the Women, Peace and Security Agenda.’

‘As one of its original proponents, we call for due recognition of women’s role in peace and security. We have already formulated a national action plan in this regard,’ she added.

Sheikh Hasina said that Bangladesh’s unflinching commitment to peace has resulted in the adoption of a zero-tolerance policy towards terrorism and violent extremism.

The prime minister said that Bangladesh consistently and strongly supports the global quest for a nuclear weapons free world. ‘To that end, we support the aspirations of developing countries to benefit from the peaceful use of nuclear technology,’ she said.

‘Our painful experience and the worst form of genocide and crimes against humanity that our nation had to endure during our struggle for independence motivated us to support the legitimate cause of the Palestinian people,’ she added.

Sheikh Hasina said that the COVID-19 pandemic indeed aggravated existing global challenges and it has also reinforced the indispensability of multilateralism.

The prime minister said that on the 75th Anniversary of the United Nations, Bangladesh’s commitment to multilateralism as embodied in the UN Charter remains unflinching.

She said Bangladesh was among the first rank of countries to endorse the UN secretary general’s various initiatives, including his global ceasefire appeal.

At the outset of her speech, the prime minister congratulated Volkan Bozkir on his election as the president of the 75th UNGA.