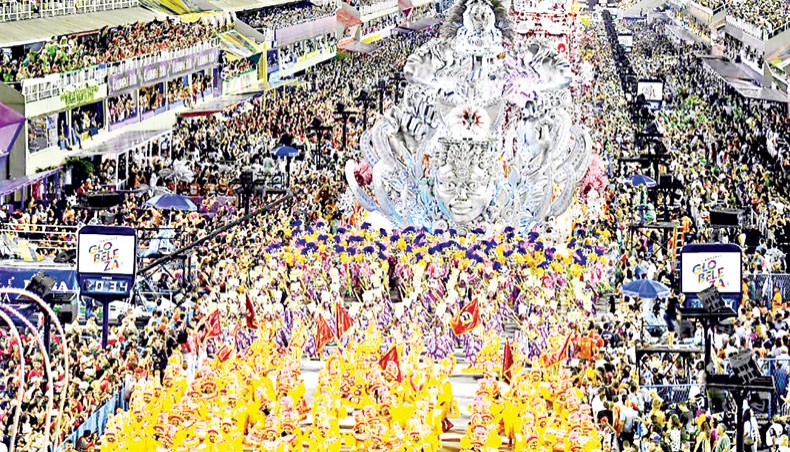 In this file photo taken on February 23, 2020 members of the Viradouro samba school perform during the first night of Rio’s carnival parade at the Sambadrome in Rio de Janeiro, Brazil. — AFP photo

Originally scheduled for February 2021, the Brazilian beach city’s carnival is a massive mixture of social-distancing no-no’s, from the huge crowds that attend the annual samba school parade competition to the giant free-for-all of street parties known as ‘blocos.’

After organizers announced Thursday they were indefinitely postponing the samba school parades because of the pandemic, the association responsible for 11 of the biggest ‘blocos’ said it was following suit.

‘The samba school league made the absolutely correct decision. Holding carnival -- whether it’s samba schools or ‘blocos,’ any kind of carnival with crowds of people -- without certainty on a vaccine or guarantees for people’s health is a mistake,’ said Rita Fernandes, president of the Sebastiana association.

‘Sebastiana has decided that without a vaccine and especially without health guarantees for the population, we’re not going to hold any kind of carnival at all,’ she told TV network Globo News.

Rio’s carnival, the world’s biggest, draws millions of tourists from around Brazil and the world each year.

But it has become the latest casualty of the pandemic, as Brazil struggles to get a handle on the second-deadliest outbreak of Covid-19 in the world, after the United States.

Brazil has registered 4.7 million infections and nearly 140,000 deaths from the virus.

And while its spread has slowed somewhat since July, the numbers are still alarmingly high, with an average of nearly 30,000 new cases and 735 new deaths per day over the past two weeks, according to health ministry figures.

This is the first time it has postponed carnival since 1912.

The pandemic had already forced Rio to scrap another tourist magnet, its annual New Year’s Eve celebrations on Copacabana beach.

The city’s economy will likely take a hit from both decisions. Last year, carnival brought 1.5 million tourists to Rio and added 3.8 billion reais ($685 million) to the economy.

But many residents said they supported the move.

‘I’m a huge fan of carnival -- I go to the ‘blocos,’ I dance in a samba school. But right now we need to be protecting people, especially the elderly,’ Carla Mauro, a 52-year-old architect, told AFP on Copacabana.

‘A year with no carnival won’t kill anyone.’