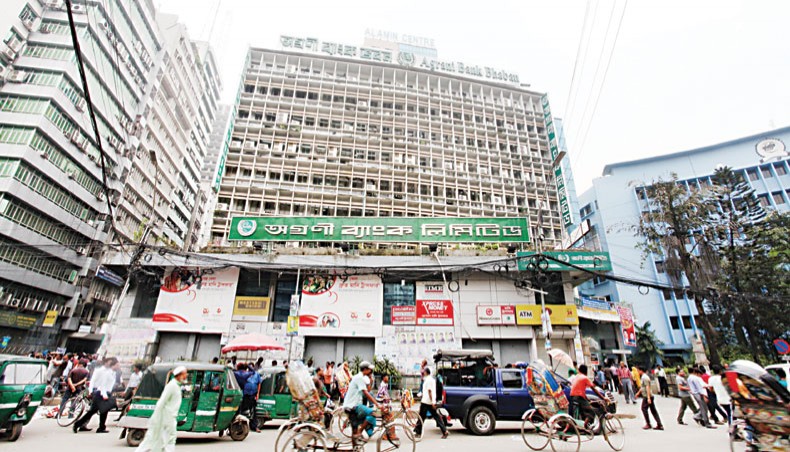 A file photo shows a view of Agrani Bank headquarters at Motijheel in Dhaka. Seven out of the country’s eight state-owned banks are yet to disburse any loan to the low-income group of people, farmers and marginal or small businesses from the Bangladesh Bank-formed Tk 3,000 crore in revolving refinance scheme in five months of its launch. — New Age photo

Seven out of the country’s eight state-owned banks are yet to disburse any loan to the low-income group of people, farmers and marginal or small businesses from the Bangladesh Bank-formed Tk 3,000 crore in revolving refinance scheme in five months of its launch.

State-owned BASIC Bank, however, has so far sanctioned Tk 65.5 crore in loans from the scheme against its Tk 75-crore loan disbursement target.

The fund was launched on April 20 this year with a view to supporting the low-income group after the outbreak of coronavirus in the country.

Forty-two banks including the eight SoBs signed memorandums of understanding with the central bank for the implementation of the package.

When the deals were signed, the banks had voluntarily set loan disbursement targets for themselves and mentioned that they would achieve the targets by December this year but the sorry state of loan disbursement by them dejected the BB, officials of the central bank said.

Officials of the BB said that the state-owned banks were supposed to be on the frontline when the issue was about the low-income group of people.

The SoBs’ response appears to be very poor, they said.

Asked about the reason for non-disbursement of loans under the stimulus package, Agrani Bank managing director Mohammad Shams-Ul Islam told New Age on Friday, ‘We are not lagging behind in disbursing loans to the low-income people. We are giving equal importance to the package as we are giving to the implementation of packages for the high volume

As per BB data, total stimulus loan disbursement target for the eight SoBs’ was Tk 491 crore.

The BB data also showed that 42.69 per cent or Tk 1,280.62 crore of the refinance package had so far been approved by 18 banks for disbursement to 55 NGOs, also known as microcredit financial institutions.

Of the approved fund, 13 banks have disbursed Tk 454.13 crore to NGOs for issuing credit in favour of low-income group of people, farmers and marginal or small businesses.

To discuss the low disbursement status and to press the banks to expedite the package implementation, the central bank is planning to organise a meeting with the banks in the first week of October.

As of September 20 this year, the NGOs disbursed loans to 51,242 customers against which BB issued Tk 184.74 crore to the banks as refinance.