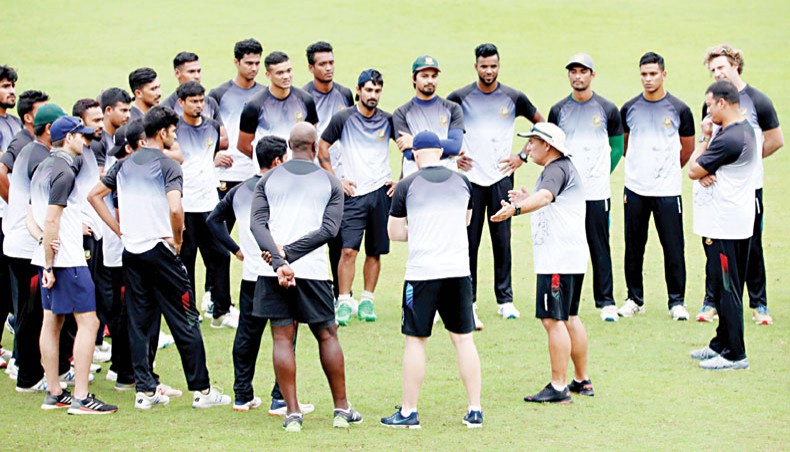 Bangladesh Cricket Board gave the cricketers training at the skill training camp a three-day break after the national team’s departure date for Sri Lanka got officially pushed back on Saturday while the uncertainty regarding the tour persisted.

The Tigers were expected to fly for Sri Lanka today but due to the disagreement between the boards regarding the quarantine rules the date of departure has now been pushed back to next month.

BCB cricket operations committee chairman Akram Khan told the reporters on Saturday that the new tentative departure date is the second week of October, therefore the team management decided to give the players a short break.

‘We were supposed to board a flight for Sri Lanka tomorrow [today] but we are unable to do so,’ Akram told the media outside the Sher-e-Bangla National Cricket Stadium in Mirpur.

‘I have talked to the CEO, national team coaches and selectors for setting up a plan and we decided to give the players a break for three days. Hopefully we will get the proposal from Sri Lanka in two-three days and after three days the players will resume training,’ he added.

Since September 14, when BCB president Nazmul Hasan publicly rejected SLC’s proposed health guidelines for the tour, the board has been waiting for a revised set of protocols from their Sri Lankan counterparts.

SLC has been negotiating with their COVID-19 Taskforce to ease some of the restrictions and Akram was hopeful to finally get their feedback in a few days.

‘Things are not in SLC’s control anymore. It’s in the hands of their health ministry. They expected to get it yesterday [Friday]. But as today [Saturday] and tomorrow [Sunday] is their weekends, they are hopeful about getting the directives by Monday or Tuesday,’ said the former captain.

‘If everything proceeds positively, then we hope that we can go to Sri Lanka on somewhere between October 7 to 10,’ he added.

Akram also assured that the delay won’t shorten the length of the series.

‘They [SLC] were about to host a Twenty20 tournament [LPL] which is not happening as per schedule. So they have time in their hands and we also have time... As the tour is part of the ICC Test championship, all the three Test matches will have to take place,’ Akram said.

Recently SLC chief executive officer Ashley De Silva in a media briefing said that they will be compelled to postpone the tour if BCB doesn’t agree to the revised regulations proposed by their health authorities.

But Akram didn’t count that as any official statement and said the board will send the team only when they are sure about the players’ comfort in Sri Lanka.

‘We have not received any official mail or document. We cannot consider what is being told outside as official communication.

‘We are not in a hurry... Our first priority is to give the players a comfort zone where they don’t feel mentally tired. We want to bring out the best performance from them, which is the most important thing. We will do everything to do well there.’

Akram also said that the board is prepared with alternative plans if the series eventually doesn’t pan out.

‘We have ample plans. If any decision comes up by the time the break is over, we will plan accordingly. The president has already told that we will hold a domestic tournament if the tour does not take place. We have our Plan ‘B’, ‘C’ and many more.’