The Doha-Kabul journey as a road to nowhere 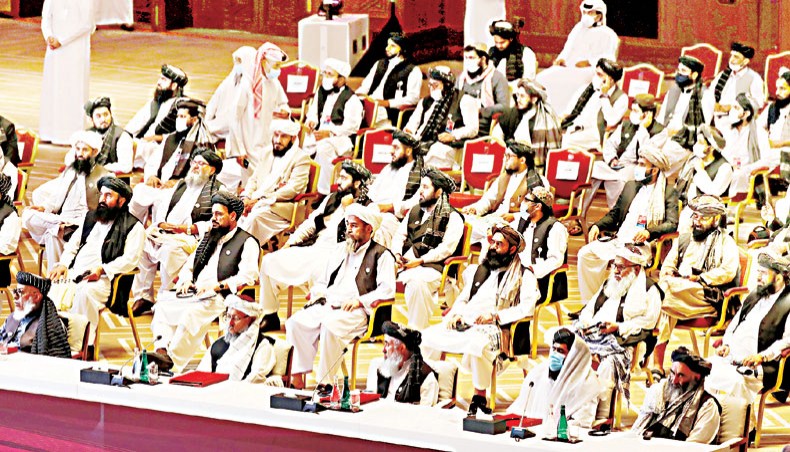 Members of the Taliban delegation attend the opening session of the peace talks between the Afghan government and the Taliban in the Qatari capital Doha on September 12. — Agence France-Presse/Karim Jaafar

There is an element of naiveté among those who feel the Taliban will find middle ground with the Afghan government, writes D Suba Chandran

FIRST, as one could observe from the statements made by Abdullah Abdullah, chairperson of Afghanistan’s High Council for National Reconciliation and overseeing the government’s peace efforts, and Mullah Ghani Baradar, the Taliban’s deputy leader, their endgame in Afghanistan appears substantially different, and even contradictory. Consider the following. Abdullah Abdullah was referring to an Afghanistan with democracy as the basis, with liberal values and equal rights for everyone, including the minorities and women. Mullah Baradar’s position is more straightforward: an Islamic emirate in Afghanistan. Keeping the theological and theoretical assumptions of a democracy and an emirate away, do these two representatives refer to something that means the same Afghan endgame? Are there at least complementarities in what each wants to achieve, and how they see the future of Afghanistan? Unfortunately, given history, the Taliban’s version of an Islamic emirate will be in direct contradiction to what the Afghan government wants in terms of democracy, human rights and equal rights for women and minorities. Striking a middle ground may be difficult, even impossible. Furthermore, this would be a deal-breaker.

SECOND, how involved will the US be once intra-Afghan talks take shape? The US endgame in Afghanistan is not aimed at a political settlement in and for Kabul. Instead, the US looks at an exit from Afghanistan, as early as possible, preferably before the forthcoming US presidential elections. The US should remain committed to the intra-Afghan process and ensure both sides, especially the Taliban, sticks to the political plot.

Unfortunately, the US will not. US president Donald Trump will declare an American victory in Afghanistan in the next few weeks. He would state the following as the American achievements: The al-Qaeda in Afghanistan is neutralised, the Taliban has severed its relationship with all external actors, the killing of Osama bin Laden, elections and democracy in Afghanistan, and, finally, an intra-Afghan dialogue. Topmost on his achievement list would be the job done in Afghanistan, announcing the withdrawal of all American troops, before Christmas or the New Year. After west Asia, Afghanistan would be Trump’s major achievement.

Third, the American exit from Afghanistan — physically and politically, would rupture the intra-Afghan dialogue process. The Afghan government has not only been reluctant from the beginning to engage with the Taliban but is also divided within in terms of how it sees the Taliban. While leaders like Abdullah Abdullah and Afghanistan vice-president Amrullah Saleh are on the extreme side in terms of how they would loathe sharing power with the Taliban, others including president Ashraf Ghani would have reservations. The Afghan leadership was pressurised by the US and even threatened with an aid cut, to get on to the road to Doha. The Loya Jirga that the Afghan government organised recently on the subject was under American pressure, to create a consensus in starting a dialogue with the Taliban. This is what the Afghan Peace Council has been tasked to and has been grappling with — to find an answer and a middle ground.

Outside the Afghan government, there are reservations among multiple sections — the minorities and women. The last few years and elections have created certain institutions of democracy and liberal notions that make many Afghans look at their future beyond the tribal and religious orders. For them, negotiating with the Taliban and reaching a middle ground will be a tough assignment.

There is an element of naiveté among those who believe that the Taliban is transformed and will find middle ground with the Afghan government. For the Taliban, it would be nothing short of an Islamic Emirate of Afghanistan. Period.

Fifth, the Taliban has been waiting for the last two decades for international troops to leave. It would wait for a few more months to see the last American soldier exit Afghanistan. Then, it would return to what it knows the best — violence. Aimed at three actors (the international troops, the Afghan government and the Afghan people), the Taliban has been employing violence as the primary strategy to achieve what it has wanted.

Despite the February 2020 agreement with the US in Doha, the Taliban never stopped from using violence. Available data would suggest that there has been no let-up in violence since February 2020, and in the process, the Taliban has got what it has wanted: the release of all Taliban prisoners. Once the Americans leave, it would go back to the strategy that has yielded maximum dividends — violence. As one could observe during the last week, violence continues today, even during the post-Doha meeting between the two actors. Also, until now, it has not agreed to a ceasefire; it will not in the near future.

The last point would be how history would judge the American intervention in Afghanistan in the last two decades. Is the US leaving Afghanistan in 2020 any better than how it saw it when it invaded the country in 2001? Or has it made the situation worse?

To conclude, if the road from Kabul to Doha was tough, the return would be even tougher and more complicated. It is also possible that the Doha-Kabul journey could be a road to nowhere.