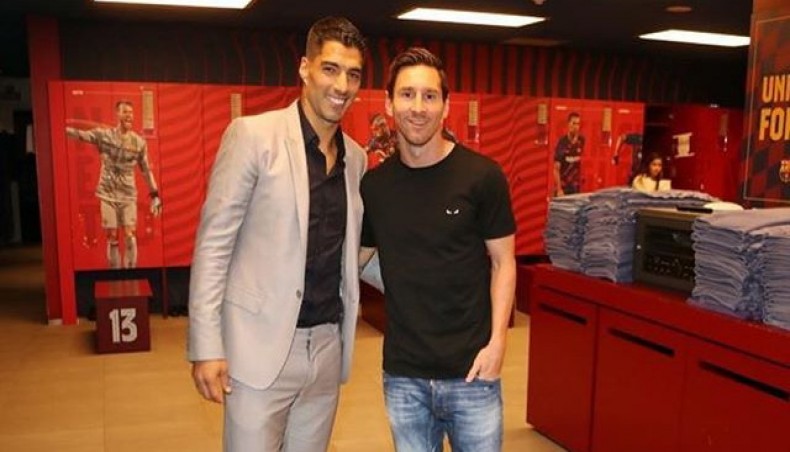 Lionel Messi said on Friday the way Luis Suarez had been let go was another sign of problems at Barcelona but ‘the truth is nothing surprises me anymore.’

The day after the Uruguayan striker had bid tearful goodbyes to Barcelona after the club sent him to Atletico Madrid, Messi expressed his sadness and dismay.

‘You deserved to be sent off as what you are: one of the most important players in the history of the club,’ Messi wrote. ‘And not to be fired in the way they did it.’

Suarez replied to Messi's post by praising the Argentine and aiming veiled criticism at Barca's management.

‘You are the number, don't let a few people blur what a giant you are for the club and for the world of football,’ wrote Suarez.

Neymar, who completed the MSN attacking trio from 2014-2017 before leaving for Paris Saint-Germain, joined the thread with a terse: ‘Incredible how they do things.’

Messi has a long-running feud with club president Josep Maria Bartomeu which intensified after they were humiliated 8-2 by Bayern in a Champions League quarter-final in August.

Messi tried to force his exit before accepting he would have to see out the final year of his contract. Meanwhile, two of his closest friends on the team, Suarez and the Chilean Arturo Vidal have left.

Monaco midfielder Cesc Fabregas, who had two spells at the Camp Nou, told a press conference he was unhappy at the way some players had been treated by Barcelona.

‘We are talking about players who gave their lives for Barca,’ he said. ‘It makes me sad.’

‘Football isn't just about what's on the pitch. Behind the scenes there are many things, and above all people.’

‘The club is going through difficult times,’ Fabregas said, before pointing out that Bartomeu faced an election soon. ‘I think a lot will change. I hope that the club will be better.’

The 33-year-old Suarez completed his medical in Madrid on Friday and joined Atletico on a two-year deal.

‘I'm going to keep playing, with fresh motivation, with the objective to show I can continue competing,’ Suarez said.

On Thursday, Suarez, who scored 198 goals for Barca to become the third highest goalscorer in club history, cried as he bid an impromptu farewell to the club.

Messi's was also sentimental on Friday.

‘Today I went into the dressing room and the awful truth hit me,’ Messi posted.

Messi and Suarez were neighbours in the beachside suburb of Castelldefels and would arrive at training together.

‘How difficult it is going to be not to continue to share the days with you, both on the pitch and off it’ wrote Messi in a post accompanied by seven pictures of the two men together, sometimes with their families. ‘We are going to miss you very much. It's been many years, many cups of mate, lunches, dinners...Many things that I will never forget.’

Suarez responded in a similar tone.

‘Thank you, my friend, for your words, but more than that, thank you for being the way you are, for what you were from the first day with me and my family,’ wrote Suarez. ‘I will always be grateful to the human Messi, the funny and sentimental one, because everybody knows about the player.’

‘It's going to be weird to see you with another shirt and much more to face you,’ wrote Messi. ‘But I wish you all the best in this new challenge.’

Suarez had already pointed out that the two have faced each other in before in highly-charged games.

‘I've already played against him in the Uruguay-Argentina matches, playing against each other is not going to change the feelings we have for each other,’ Suarez said.