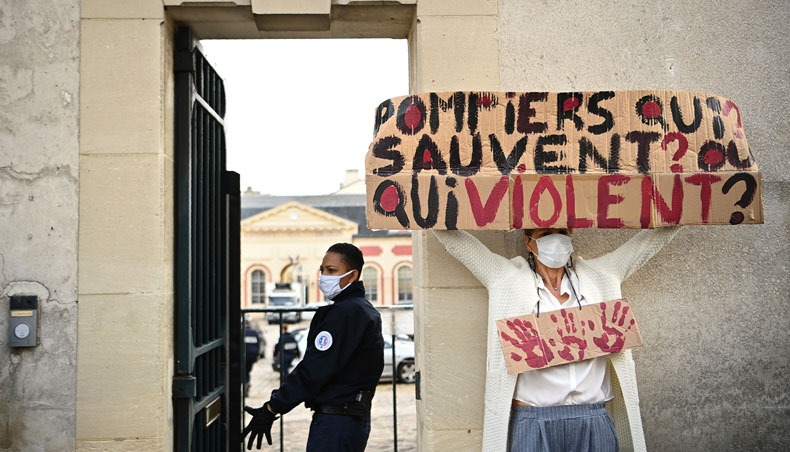 A member of women’s rights association holds a placard reading ‘Firefighters who save? or rape?’ past a policewoman during a protest prior to the start of a hearing following the referral of a case of rape of a minor by three fire-fighters at the investigating chamber outside the appeal chamber at Versailles, on September 24, 2020. — AFP photo

A young Frenchman was on Thursday handed a two month suspended jail sentence for assaulting two women one of whose outfit he claimed was too short.

The punishment handed to the man in the eastern city of Mulhouse came as anger grew in France at physical and verbal abuse towards women over their dress in public.

The man, 18, was detained on Wednesday and handed the sentence a day later under a special fast track procedure allowed under French law.

The process, known by its acronym CRPC, allowed a prosecutor to suggest a punishment to a suspect who could then accept. It was then validated by a judge and it avoided the need for a trial.

In addition to the suspended sentence, the man was ordered to undergo 75 hours of community service and have citizenship classes.

The two women had been waiting on Wednesday for a tram in Mulhouse, police said, confirming a report by France Bleu Alsace.

The young man told the woman who was wearing mini-shorts,‘Don’t you want to dress even shorter?’

The tension then rose and he pushed the young woman who fell to the ground. He also grabbed her friend by the neck when she tried to intervene.

A witness notified the police, who quickly arrested the man. He admitted the facts but claimed he had just wanted to tease the woman.

The incident came days following an outcry over an incident in the nearby city of Strasbourg, also in eastern France, after a young woman said that she was attacked by three men and beaten in broad daylight for wearing a skirt.

She said that there were over a dozen witnesses but no-one intervened or pursued the attackers.

Junior interior minister Marlene Schiappa, in charge of equality issues, visited Strasbourg on Wednesday to discuss the safety of women in public.

‘When we witness street harassment, sexist or sexual assault against women in a public space, we must react, and call the police or the gendarmerie,’ she told the LCI television channel.

President Emmanuel Macron’s centrist government had in recent weeks begun using increasingly tough rhetoric on domestic violence issues in what analysts saw as a shift to the right.

Ministers had particularly lashed out at Islamist extremism, arguing such values had no place in French society.