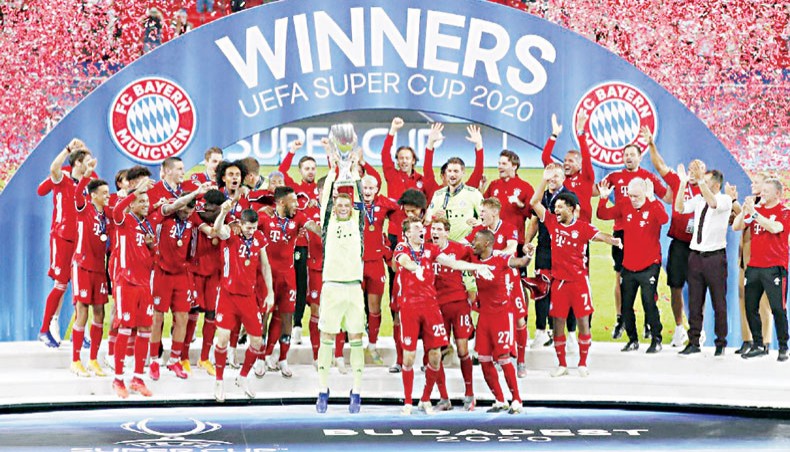 Bayern Munich players celebrate with the trophy after defeating Sevilla in the UEFA Super Cup at the Puskas Arena in Budapest on Thursday. — AFP photo

Bayern Munich calculated on Friday that victory in the European Supercup had given them the record for most consective wins by a club from one of the continent’s ‘big five’ leagues.

‘For the Munich team it was a 23rd victory in a row,’ said the club on their website the day after Hansi Flick’s Bayern team beat Sevilla 2-1 in extra time in Budapest.

‘No other team from the European top five leagues has ever managed such a streak. It is therefore unique, a new record!’

Football statisticians confirmed that the longest known winning streak had been by Carlo Ancelotti’s Real Madrid, with 22 straight, between September and December 2014.

Bayern’s run, in contrast, came at the end of a season and included a string of big matches such as the German Cup final and the later rounds of the Champions League, as well as he Super Cup.

‘This deserves the utmost respect and recognition. Congratulations to the team and the whole team behind them,’ president Herbert Hainer said.

The club website praised the way Bayern had won.

‘Much more remarkable than this number is the way Bayern have played the during the streak. Flick’s team dominated almost every opponent, no matter if they were called Chelsea, Borussia Dortmund or Barcelona.’