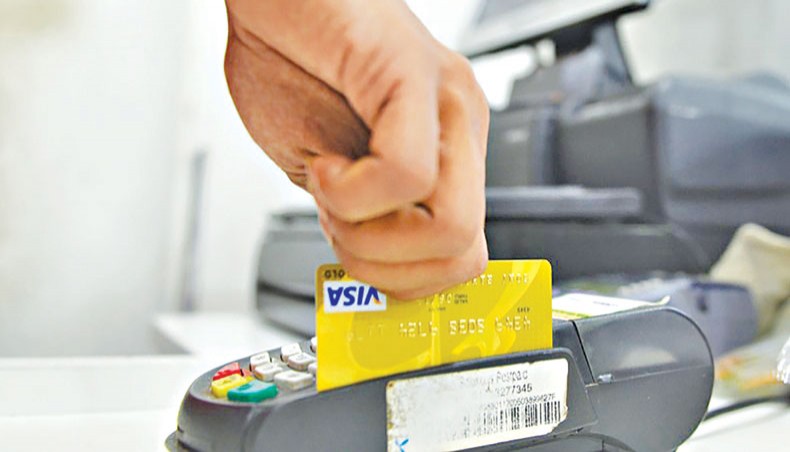 A file photo shows a salesperson swiping credit card of a customer through a POS machine in the capital, Dhaka. The Bangladesh Bank on Thursday set the highest limit on interest rate on the credit card usage at 20 per cent as many banks were charging their customers above 27 per cent in violation of the BB’s regulations.— New Age photo

The Bangladesh Bank on Thursday set the highest limit on interest rate on the credit card usage at 20 per cent as many banks were charging their customers above 27 per cent in violation of the BB’s regulations.

The rate would be effective from October 1 this year.

Now, the banks are allowed to charge additional 5 percentage points interest on top of their highest consumer loan interest rate.

In most of the banks, the rate of interest on credit cards is around 27 per cent.

The banks were supposed to lower the interest rate on credit cards to 14 per cent as per the regulatory guidelines when the BB imposed the maximum ceiling on all sorts of loan products at 9 per cent on April 1 this year.

In violation of the BB’s instruction, the banks have continued charging customers even more than 27 per cent that prompted the BB to issue the fresh instruction on Thursday.

As a result of the BB’s latest instruction, the applicable annual interest rate on credit card usage would go down by at least 7 percentage points.

The BB circular said that the banks were allowed to serve customers up to 50 per cent of the credit card limit as advances.

However, many banks were issuing loans to their customers against credit cards at flat rate of interest.

The BB termed the issuance of such loans at high interest rate irrational and said that the rate was hurting the customers’ interest.

The central bank said that the interest could be imposed on unpaid bills from the immediate next day of the last date for payment of credit card bills.

Banks would not impose the interest from the date of transaction, it added.

Banks were barred from providing any other cash withdrawal facility to their customers as loans against credit cards except 50 per cent cash withdrawal against their limit.

The BB said that banks could charge late fee for only one time against any late payment.

Many banks are imposing higher rates of interest on their credit cards and the banks imposed interest on progressive rate on unpaid bills from the date of transaction, violating the central bank regulations that prompted the BB to issue the circular, said a senior BB official.

He said that the central bank received a huge number of complaints about card-related irregularities from clients every month.

On April 15 this year, the BB asked banks not to charge any interest on credit card late fees for the period between March 15 and May 31 this year due to the coronavirus outbreak in the country.

Some banks informed their clients that late fees would be waived but had not mentioned anything about other charges or fees incurred due to late credit card bill payment.

According to the BB data, 35 of the total 60 banks in the country are operating credit card business.