Yes, there is hope 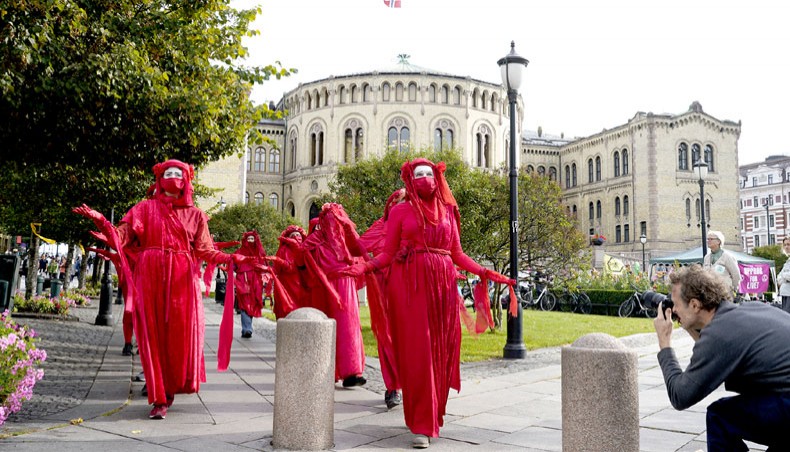 Members of the climate movement Extinction Rebellion demonstrate outside the Storting to protest against the government’s oil policy on September 21 in Oslo. — Agence France-Presse/NT Scanpix/Gorm Kallestad

There’s a crack in everything. That’s how the light gets in.    — Leonard Cohen

IT HAS often been said that the great triumph of the capitalist system has been to make us believe that we cannot change it. Margaret Thatcher began this with her ‘TINA’ slogan (‘There Is No Alternative’), adopted not only by Reagan, but also by Third Way advocates like Blair and Clinton.

However, the class struggle and the battle for ideas continued to be waged. This was evident in the worldwide protests against the Iraq war in 2003, which not only constituted the biggest mobilisation against a war in history, but also sowed seeds of peace that have blossomed since then in response to every armed conflict and the looming threat of nuclear war.

By 2011, social movements were not just expressing their outrage, but also putting alternatives on the table. Although they lacked the means to implement them, they did succeed in democratising consciences, with notable effects in recent years which we will come to.

It is obvious that hope has seen better days, but also that despair, a weapon of the system, has not overcome the working class or intercultural forces. As Lorca once wrote, ‘The most terrible of all feelings is the feeling of having dead hope’. This is why grassroots organisations work to offer viable, real hope, drawing on existing expectation with the aim of organising it and expanding it through tangible advances.

THE philosophy of liberation and critical pedagogy aim to turn the pessimism of the intellect and the optimism of the will into informed, educated, militant hope. This is effectively a matter of developing a pedagogy of hope, as Paulo Freire taught us.

Informed hope, based on an accurate diagnosis of problems, is oriented toward proposing improvements. Hope is the means by which we arrive at possibilities for bettering the world. Accepting defeat is easy; more challenging is to hear the grass grow, as it turns not just into grass, but first into bushes and then into a jungle. This can be done through material and communicative practices based on justice.

A pedagogy of hope means first of all that we must not deceive ourselves: the reality is pessimistic, and as a general rule, the future is going to be harder. Secondly, it means recognising that there are effective possibilities for participation in improvements through the collective praxis in social organisation and in our relationship with the environment. Finally, it involves acting on this knowledge with a commitment to promoting hope.

A STARTING point is to remember what Warren Buffet said: ‘There’s class warfare, alright, but it’s my class, the rich class, that’s making war, and we’re winning’. This is the battle.

Although alternatives are still at an early stage of development, the rejection of capitalism (56 per cent of the world’s population) is a sign of hope. The fight for better economic equality and democracy is paramount.

The myth of meritocracy is in the course of being exposed. For example, only 33 per cent of the US population believes that wealth depends on hard work compared to 65 per cent who think it depends on advantageous circumstances. However, few see the relationship between the existence of billionaires and the hardships suffered by others, revealing another important aim for a pedagogy of hope.

Both sectors of the elite favour the financialisation of the economy that will ultimately cause widespread harm until specific alternatives for de-financialisation and the subordination of finances to the productive economy are established.

NOTWITHSTANDING tactical divergences, both segments of the elite also agree on the promotion of a technological revolution controlled by oligopolies that is leaving behind anyone unable to ‘adapt’.

In the face of a transition that already has its ‘disposables,’ grassroots organisations are demanding protections for those most impacted and calling for a decisive move toward legal frameworks that view communication technologies and robotics as public goods belonging to the commons.

Economic inequality is reflected in unequal media ownership and access. This has resulted in a reopening of the debate about the democratisation of the media oligopoly so that media communication ceases to be the privilege of the powerful and instead becomes the right of all.

As argued in the Media Manifesto, hope is supported by a 27 per cent increase in self-managed cooperatives in the global media sector, in which workers and users have control over decisions, organise the work democratically, develop sustainable financing models, and are accountable to the community.

Structural reforms would give the media autonomy so that they are neither instruments of paralysing fear nor recipes for magical optimism. This means that they are no longer tools for legitimising the inequality that their owners benefit from, so they can expand the limits of acceptable opinion.

Profound transformations are needed so that the media, instead of being an instrument for making people think and do certain things exogenously, becomes an instrument of the social majority, presenting the world and giving people the freedom to decide on objectives endogenously. Not to make others act, but to help them know enough to enable them to act themselves.

LIBERALS and authoritarians differ in their respect for the rules of formal democracy. But we need to remember that the economic inequality of open, neoliberal capitalism curtails the possibilities of political democracy. The forces for change aim to promote the democratisation of the economy along with the democratisation of politics toward more participatory models in which power relations are balanced.

It should not be forgotten that capitalism only survives thanks to the political support it receives from states. The disastrous consequences of the pandemic are the result of the impact of capitalism on preparing for and managing the outbreak effectively. This was not a profitable enterprise, hence the incompetence of political leaders at the service of capital and their own short-term interests. This is why many activists have become involved in electoral campaigns, while remembering that change occurs at the grassroots level.

ANOTHER difference between the two dominant options is that authoritarian capitalism goes to the extreme of denying climate change, while open capitalism advocates market responses that serve as greenwashing, but are completely inadequate. Both sides choose to ignore the incompatibilities between maximising profits and unlimited growth on the one hand and combating climate change on the other.

Life has been complicated by the pandemic, but it is important to remember that it is a mere taster of the hardships to come if we fail to take decisive action against climate change. Otherwise, we run a serious risk of bringing an end to organised society, which would be something akin to extinction. Remembering this is not to predict our doom, but to find ways to prevent it.

Indigenous knowledge and practices and processes for the formal recognition of the rights of nature point to new learning opportunities. The pedagogy of hope must clarify the connections between specific problems like those arising from the pandemic, climate change, and productivist and consumer capitalism.

GLOBALISTS advocate multiculturalism and the commodification of identities, while authoritarians prefer to cling to a false notion of purity and to traditional representations. In the opinion of the vast majority of US citizens, companies are adopting racially inclusive postures not out of genuine concern but due to social pressure.

Thanks to the advances made by feminism, worldwide optimism about greater gender equality is in good shape, while in the United States, 57 per cent of the population maintains that it has not gone far enough.

Black Lives Matters has demonstrated that beneath police brutality there is a problem of structural racism, and it has promoted important discussions about the past and present that until now have been ignored. It may in fact be the greatest social movement in US history. This reflects a democratisation of culture and consciousness. The solidarity that has developed internationally is also a clear sign of an informed, militant hope.

THE global system is extremely powerful, but it is neither omniscient nor omnipresent. To tackle oppression, interdimensional responses are required that will allow the construction of unity in diversity.

An alliance of the working class and intercultural forces (80 per cent of the world’s population) could achieve sufficient support (appealing to the other 19 per cent) in order to intervene in the social system and redirect it against the richest 1 per cent.

The population trusts in cooperation and there is an increasing number of experiences that advocate for the social control of production and put collaborative methods for hope and dialogue into practice.

OpenDemocracy.net, September 22. Joan Pedro-Carañana is in the department of journalism and new media of the Complutense University of Madrid. His interest lies in the role of communication, education and culture in the transformation of societies.