Bangladesh’s traditional weavers hanging by a thread as factories boom 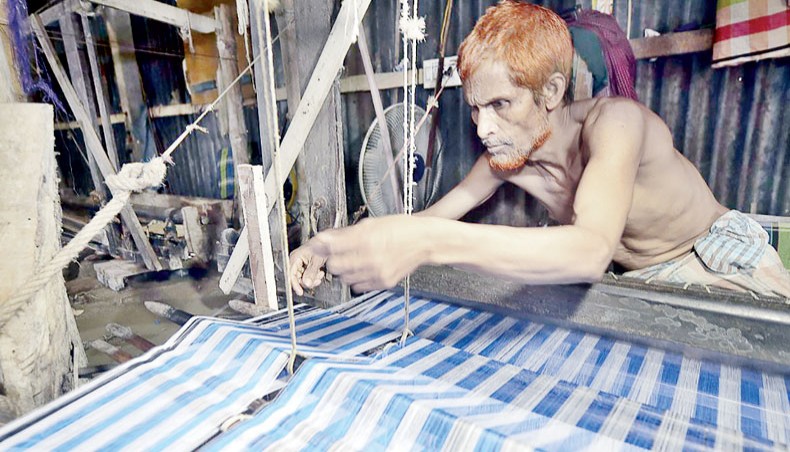 In this picture taken on September 15, 2020, a weaver uses a handloom to make fabric in Ruhitpur on the outskirts of Dhaka.— AFP photo

In small tin sheds in a town outside Bangladesh’s capital Dhaka, wooden looms are deftly operated by a group of men and women -- some of the country’s last traditional weavers -- as huge garment factories churn out cheaper alternatives.

The nation’s centuries-old traditional weaving was once highly sought after, with nobility from Asia and Europe wearing the fine muslin clothing.

But over the past two decades, Bangladesh has become one of the world’s largest ready-made garment exporters, with 4,000 factories making clothes for the likes of retail giants Primark and H&M.

Left in its wake are traditional weavers such as 55-year-old Mohammad Abu Taher, who is the last of his family to take up the once celebrated vocation.

‘My great-great-grandfather was a weaver and all my ancestors were into weaving,’ Taher told AFP as he sat in a tin shed with several other artisans in  Ruhitpur, a town 20 kilometres (12 miles) from Dhaka.

Taher’s two sons have left Ruhitpur for the capital to seek work, unwilling to pick up the dying art-form.

Three centuries ago, Ruhitpur was one of the region’s biggest hubs for manufacturing lungis -- traditional sarongs worn by men.

There were 4,000 handlooms in Ruhitpur and nearby villages, employing 12,000 weavers.

A handwoven lungi from Ruhitpur was a ‘prized asset’, said local trader Chowdhury Abdur Rahman, recalling stories of his father and uncles buying the cloth for their weddings.

‘It was a big part of Bengal’s heritage,’ historian Hameeda Hossain said of the historical region now known as Bangladesh and West Bengal state in India.

Now, just three dozen weavers -- with an average age of 50 -- remain in Ruhitpur, serving a small group of customers still willing to shell out for the softer, handmade lungis.

‘Our lungi is expensive. Still, some people haven’t deserted us because of the softness of handmade clothing,’ 45-year-old Ruhitpur weaver Mohammad Rafiq told AFP.

But he admits his profession is dying out.

Employment in the town has shifted to almost a dozen factories manufacturing plastic, textiles and jute that have more than 10,000 people on the payroll.

‘They (factories) have set up electric-powered weaving industries worth hundreds of millions of dollars,’ he said.

‘They can make lungis and saris very cheaply. We can’t compete with them in terms of price.’