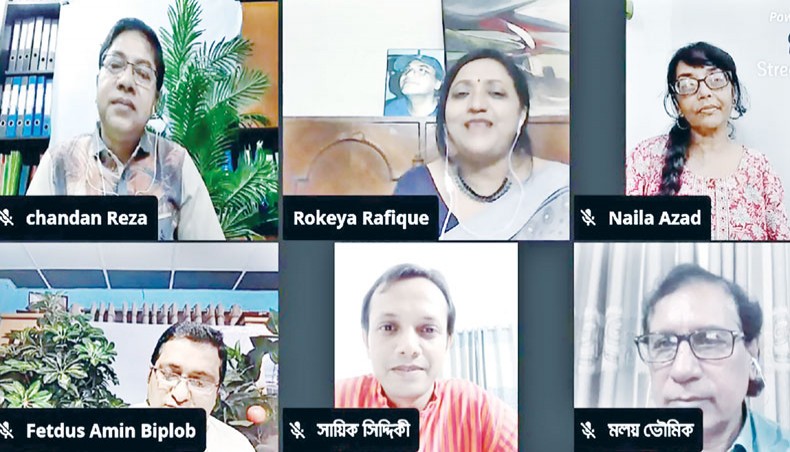 The programme, titled ‘Natyajagge Drohe Manabikatay S M Solaiman’, was organised marking the 67th birth and 19th death anniversaries of SM Solaiman, who was born on September 29, 1953 and passed away on September 22, 2001.

The event was streamed live on the Facebook page of Theatre Art Unit, which was founded by SM Solaiman.

Theatre activist and playwright Malay Bhowmick and actress Naila Azad Nupur were present as discussants at the programme, which featured a discussion and awards ceremony.

‘SM Solaiman dedicated his life to theatre. He made significant contribution to country’s theatre scene between 1975 and 2001. He penned plays criticising religious bigotry, military rule, social anomalies and others,’ said Malay Bhowmick.

‘SM Solaiman incorporated cultural elements including songs, dance and others to theatre productions. He also included elements from western cultures in his plays,’ added Malay Bhowmick.

Naila Azad Nupur  said,‘The characteristics of both total theatre and traditional performing art are present in Solaiman’s plays. He combined songs, dance and folk elements in his plays like “Amina Sundori”, “Sunai Koinyar Pala” and others.’

‘He (SM Solaiman) dedicated his life to theatre. He will always be an inspiration to me. It is our responsibility to promote his works and ideology among the upcoming generation. Every year we celebrate birth and death anniversaries of SM Solaiman organising a theatre festival and an awards ceremony where we honour a theatre activist with SM Solaiman Pronodona. This year due to COVID-19 crisis we were forced to arrange an online programme. We also introduced the Manab Hitaishee Sammanana this year to honour a theatre activist for his contribution to society during the crisis,’ said Rokeya Rafiq Baby.

SM Solaiman Pronodona was introduced by Theatre Art Unit in 2005. The award is presented annually to a young theatre activist or a theatre troupe.

SM Solaiman was the founder of the theatre troupes namely Theatre Art Unit, Padatik, Dhaka Padatik and others. He was elected the general secretary of Bangladesh Group Theatre Federation twice.