The last Stalinist of the Soviet Union 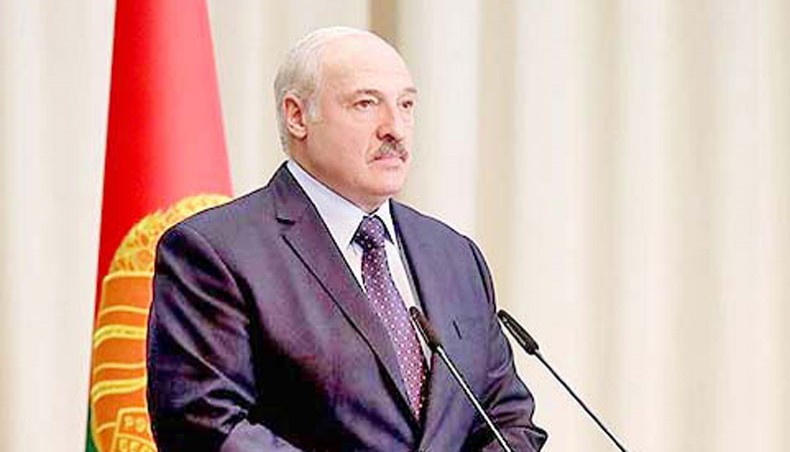 IN 2005 Belarus president Aleksandr Lukashenko was dubbed ‘the last dictator in Europe’ by president George W Bush’s secretary of state Condoleezza Rice. The name has stuck in the West. The US foreign policy establishments pretend that ‘dictator’ is a dirty word to them. They actually only use it for propaganda purposes.

The US has a long history of cozying up to and backing dictators. The US backed the fascist dictator Francisco Franco from the 1936 Spanish Civil War until 1973. Prominent US politicians and corporations helped Hitler rise to power in 1934 and rebuild Germany’s military. The US supported the corrupt Ferdinand Marcos of the Philippines from 1965 until 1986; Suharto (who presided over one of the greatest bloodbaths in the postwar period) in Indonesia from 1968 until 1998; Hosni Mubarak in Egypt from 1981 until 2011; and the US continues to support dozens of right-wing and fascistic criminal dictators and archaic evil monarchies today, such as Saudi Arabia.

US presidents from Franklin Delano Roosevelt to Richard Nixon said about Nicaragua’s fascistic dictator Anastasio Somoza, ‘he is a son of a b*tch, but he is our son of a b*tch’. The only problem that the US has with Belarus’s Lukashenko is that he is not the US’s SOB.

Lukashenko is a tough Stalinist. A better nom de plume for Lukashenko would be The Last Stalinist of the Soviet Union. Even his secret service is still called the KGB (Komitet Gosudarstvennoy Bezopasnosti). Most Belarusians support him, as was shown by the majority vote he received in the August 9, 2020 elections. He clearly won the election. Stephen Lendman and many others in the alternative media have written about it. His opponent Svetlana Tikhanouskaya is no Joan of Arc as portrayed by Western propaganda. Just like Juan Guaidó is not the president of Venezuela.

Belorussia was the smallest republic of the former Soviet Union, with less than 10 million people. Translated, Belorussia means ‘White Russia’. That is not the same as the White Russians who opposed the 1917 ‘Red’ Bolshevik revolution.

Those anti-revolutionary White Russians of 1917 were mostly Cossacks who enjoyed a very privileged position in Tsarist Russia. Cossacks were borderland defenders of Russia in Ukraine and the Caucasus Mountains. The Tsars gave them titles as dukes and duchesses, and gave them their own land. Few Americans know the history of the US invasion of Russia from 1918 to 1925 on the side of the White Russians. Almost every Russian does though.

Belorussia took its ‘whiteness’ from its historical narrative of not having been successfully invaded by the Mongol empire in the 13th century, unlike Russia and Ukraine. Belorussia was protected on the east by dense swampy forests. A misstep by would-be invaders found themselves sinking in the swampy quicksand. Belorussian defenders knew the swampy forests like the palm of their hands. The Germans learned that the hard way from Belorussian partisans who raised havoc from behind the Nazi lines during World War II. After the breakup of the Soviet Union, Belorussia became an independent country, and officially changed its name to the Republic of Belarus.

Lukashenko was first elected president of Belarus in 1994, before Putin was elected the president of Russia in 1999. Belarus is a small country, which is poor in natural resources. Lukashenko has been a thorn in Putin’s side for years, because of his constant nagging for ever more subsidies and lower prices for natural gas from Russia. What Belarus lacks in natural resources it makes up for in agriculture, beef, manufacturing and technology. Belarusians enjoy socialist health care, education and modern infrastructure. Russia is its main trading partner, and Germany is its second largest.

Putin complains that Lukashenko has had his butt in two chairs for decades. Lukashenko has half his butt in Europe. He uses Belarus’s strategic location for the North Atlantic Treaty Organisation as a bargaining chip to squeeze Putin for subsidies and other concessions. The US has become tired of playing footsie with Lukashenko. The US wants Belarus as another puppet vassal to encircle Russia, just as the US has done with the former Yugoslavia, Poland, the Baltics, Ukraine, Georgia, and elsewhere. The US has ham-handedly overplayed its hand with Lukashenko by using the 2020 election to try to stir up a colour revolution.

Belarus’s border with Russia is only a few hundred miles from Moscow. The American people have no national interests in Belarus, but for Russia it could be a NATO dagger pointing at its heart. For that reason, Putin has let Lukashenko swing for the last month in order to teach him a lesson that playing footsie with NATO could end up with him hanging from a street lamp, with a US noose around his neck. Putin has played his hand well, and now he has Lukashenko’s full attention and loyalty.

Lukashenko met with Putin in Sochi, Russia on September 14 in a long-planned meeting of the Eurasian Economic Union, as well as a meeting of the states of the Collective Security Treaty Organisation, and the Commonwealth of Independent States. Lukashenko can no longer twist Putin’s wrist for more subsidies.

Putin looked in control in the meeting at Sochi. He announced his concessions to Lukashenko. Lukashenko tried to look strong as he ate humble pie from his ‘big brother’. On Belarus’s homepage Lukashenko is quoted as telling Putin:

‘The economy is the basis for everything. Trust me, we have always pursued this course. Some recent events have shown that we should stay closer to our elder brother and cooperate in all fields, including in economy.’

As an American, I have been looking at Russia from the inside for over twenty years. I will try to give some insights from my perspective.

Everyone should know that since the collapse of the Soviet Union in 1992, the US has been encircling, expanding NATO, and chopping away at Russia’s borderlands. For example, president Bill Clinton’s illegal war against Yugoslavia. It was a US war crime and a crime against humanity. You can read about it from the Guardian (2007), when the Guardian still had reliable journalistic standards.

The illegal US/NATO aggression against Yugoslavia was a replay of the 1980’s terrorist mujahideen in Afghanistan against the USSR. The purpose of the war against Yugoslavia was to break up one of the last socialist countries in Europe, allied with the former Soviet Union, and exploit it as capitalists wantonly do, and to carve out Kosovo — essentially an outlaw state — to host the largest US military base in Europe, Camp Bondsteel.

The destruction of Yugoslavia was finalised earlier this month. Serbia’s president Aleksandar Vučić was seated like a school child at a tiny desk next to his ‘teacher’ in Washington. President Donald Trump towered over him at his imperial desk in the Oval Office. Vučić was there to receive Serbia’s documents of defeat. Like a dunce Vučić signed it. It was apparent that Vučić did not even know the final terms of his surrender to the US.

Everyone should also know about the US 2014 illegal coup in Ukraine. The US was behind a European Union bait-and-switch offer to Ukraine for eventual membership in the European Union. Ukraine was suffering under economic hardships, and the US and EU put stars in the eyes of the Ukrainian people. The psy-op had the Ukrainian people dreaming of a future prosperity, being Europeanised and eventually becoming NATO members.

The terms that the EU ended up offering to Ukraine were so deceitful that no Ukrainian president, no matter how corrupt, could accept them. The result was the US-choreographed, the ‘f*ck the EU’, Euromaidan colour revolution. US meddling has resulted in thousands of deaths, chaos, and the lives of ordinary Ukrainians has been the worse for it. The corruption has just changed hands to US profiteers.

The eastern Ukrainian people wanted no part in the coup. The US backed a fascist and corrupt coup government in Ukraine, which wanted to ethnically cleanse eastern Ukraine of its Russian ethnicity. It is another shameful episode in US history, which Western propaganda frames as ‘Russian aggression’.

Ukraine, Belarus and Russia have had a sibling rivalry for centuries. Today, Russia is the unquestioned ‘big brother’, but not necessarily loved, often resented and even hated by its brothers. Still brothers they are. There is nothing the US foreign policy neocons love more than a family feud, so that they can worm into the middle of it to divide, conquer and pillage the family jewels. It is the classic playbook of colonialism.

During the 16th and 17th century both Belarus and Ukraine were conquered by the Polish-Lithuanian empires, and that is what gives both western Ukraine and western Belarus its European heritages. In the 20th century, Western Europe and the US are where they get their fascism from.

Lukashenko’s publicity stunt of confronting protesters marching on the presidential palace in Minsk with his AK-47 in his hands and dressed to the hilt in full combat gear played well to his audience in Belarus, and in Russia. Nor did Lukashenko close down Belarus for COVID-19, regardless of the tremendous international pressure to do so. Belarus, like Sweden, is probably the better for it.

In Sochi Lukashenko told Putin that he can hear the American tanks in Lithuania 10 miles from the Belarusian border:

‘Why do they have to do it? This is why we shouldn’t commit errors that happened during the Great Patriotic War when everyone was trying to calm things down — Soviet army units didn’t even manage to group up and resist the invaders, who promptly crossed Belarus and reached even Smolensk.’

In WWII it took Hitler just 18 days to overrun Belarusia with the invasion of June 22, 1941. The Russians stopped them at Smolensk, just 250 miles from Moscow. Belarusian partisans continued attacking the Nazis from behind German lines.

The siege of Smolensk lasted until 1943, similar to the sieges of Leningrad and Stalingrad. The victory of the Soviet Union in WWII cost Russia 20 million dead, Belarus 2 million dead, and Ukraine 7 million dead. All told, about 20 per cent of their populations were killed. The suffering of those who lived through it and the destruction to the Soviet Union are incalculable. Most Americans have no idea of how deep the memory and pain is, or that it was the Soviet Union, not the US that won World War II.

Lukashenko is the last Stalinist of the Soviet Union. He bent for ‘big brother’ Putin in Sochi, but he is not going to become a vassal to the US because of NATO tanks on his border. Nor will Lukashenko wilt because of US backed colour revolutionary ‘P*ssy Rioters.’

The US-backed colour revolution has failed. Lukashenko will continue as the last Stalinist in the Soviet Union, for now. He had best stay close to his ‘elder brother,’ because Putin is going to be watching him even closer!