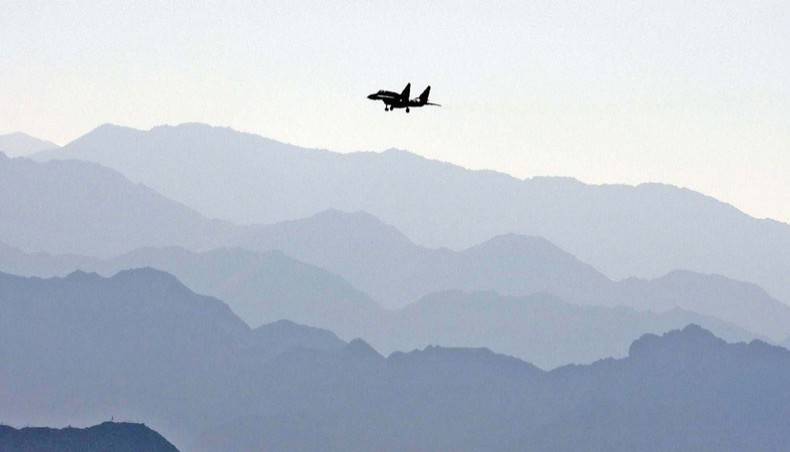 A mountain range in Leh, the joint capital of the union territory of Ladakh bordering China. — Agence France-Presse/Mohd Arhaan Archer

THE ground situation in Eastern Ladakh shows little change; other than that, towards the end of August, India effectively thwarted an attempt by China to alter the status quo and take control of areas on the south bank of the Pangong Tso. China’s reaction was sharp, accusing the Indian army of having ‘undermined the consensus reached’ at the diplomatic and military talks. Several thousand troops of the People’s Liberation Army, in the meantime, remain mobilised across the entire region.

IN THE first statement made in parliament on September 15 on the situation on the Line of Actual Control in eastern Ladakh, defence minister Rajnath Singh lambasted China, stating that China was attempting to unilaterally alter the status quo, and that while India wanted to peacefully resolve the ongoing military confrontation, it was fully prepared to deal with any situation. China immediately rebutted the charge, blaming India for ‘violating’ existing border agreements, and alleging that India bore responsibility for the recent situation. China observed that the most important task for India is to disengage on the ground as soon as possible, and take concrete action to ease the situation.

Earlier, on the sidelines of the Russia, India, China trilateral meeting in Moscow in early September, the Indian and Chinese defence and foreign ministers had met to try and sort out matters. Rajnath Singh met his Chinese counterpart, General Wei Fenghe on September 4, while the Indian and Chinese foreign ministers (S Jaishankar-Wang Yi) held a meeting on September 10. Given the precarious military situation in eastern Ladakh, both meetings had been invested with considerable significance.

According to reports, Rajnath Singh, in his meeting, did not mince matters, putting the blame entirely on the PLA for its ‘aggressive actions and behaviour’ in seeking to ‘unilaterally alter the status quo’ in violation of all bilateral agreements. According to Xinhua, General Wei is believed to have said ‘China’s territory cannot be lost and the Chinese military is fully determined, capable and confident to safeguard national sovereignty and territorial integrity’. The blunt exchanges between the defence ministers did little to assuage ongoing concerns.

There was considerably great anticipation about a possible breakthrough during the September 10 meeting. On the eve of the talks, India’s external affairs minister had even been quoted as saying that the situation called for ‘deep conversation between the two sides at the political level’, and India and China ‘needed to find an accommodation’.

WHAT emerged from the talks, however, fell well short of expectations. Some preferred to see in the outcome an illusion of forward movement where none existed. The ‘Five Point Consensus’ limited itself to urging the two sides to take guidance from ‘the consensus of their leaders on developing India-China relations, including not allowing differences to become disputes’. The remaining points were confined to urging both sides to abide by all existing agreements and protocols on China-India boundary affairs and maintain peace and tranquillity; avoid any action that could escalate matters; reiterated the importance of the special representative mechanism to maintain communications; and calling for the continuance of meetings of the Working Mechanism for Consultation and Coordination on India-China Border Affairs. Work to conclude new confidence-building measures to maintain and enhance border peace and tranquillity were shelved, to be considered after the situation eases. Neither the joint statement, (nor the respective notes issued subsequently) specifically or obliquely mentioned a return to ‘the status quo’ or to positions prior to the stand-off.

Confirmation of the wide divergence in views existing between the two sides was to be found in the contents of the separate notes circulated by the two sides following the meeting. China, for instance, claimed that the Indian side ‘does not consider relations to be dependent on the settlement of the boundary question’. This, according to the Indian side, was very different from what the Indian external affairs minister had said at the meeting. The Chinese side was again dismissive of the tensions prevailing in India, claiming that the ‘Indian side believes that China’s policy towards India has not changed’. It, thereafter, goes on to pontificate that what China and India need now is cooperation not confrontation, mutual trust and not suspicion. It is evident that for China, despite all that had happened, and the ongoing tensions, it was ‘business as usual’, ignoring the huge trust deficit that existed between the two countries.

IT IS tempting to view the Jaishankar-Wang Yi interaction, as reflecting implicitly the contrasting strategic thought processes that are to be found in Kautilya’s Arthashastra and Sun Tzu’s The Art of War. The two foreign ministers seem — separately and in their own way — to reflect the influence exerted on their thinking by these two texts; on how to deal with paradoxes and on the prosecution of seemingly contradictory approaches to ensure success. While restraint and moderation, as well as a balanced attitude to the use of force, are recurring themes tin both texts, there are clear divergences when it comes to methodologies to be employed. For Sun Tzu, strategic positioning is critical to obtain a strategic advantage. All warfare, according to Sun Tzu is based on deception, and deceiving the opponent. While Kautilya emphasises the significance of both power and morality, Sun Tzu seeks to subdue the enemy without fighting and resorting to attacking the enemy’s strategy as the best option. For generations, China’s leaders have imbibed and adhered to Sun Tzu’s maxims, and Wang Yi seemed to have employed this tactic.

In the extant circumstances, the dilemma that India’s external affairs minister probably faced was how best to achieve a modus vivendi, without compromising India’s position and foreclosing all options with China, short of war. Unlike his opposite number, Jaishankar was possibly a prisoner of a separate set of beliefs, for in his own words, the challenge India faced is to ‘manage a more powerful neighbour while ensuring its own rise’. To him, the bottom line for the relationship seemed clear: peace and tranquillity must prevail on the border, if progress made in the last three decades was not to be jeopardised. One could well ponder over the fact whether this dictated his approach during the two-hour-long discussion with his Chinese counterpart, in which the most conspicuous omission was the lack of any mention of restoration of the status quo as of April, as the starting point for any new round of diplomatic negotiations.

UNDERSTANDING Chinese motives are difficult at any time. At present under Chinese president Xi Jinping, it has become still more convoluted. Driven by his notion of the ‘community with a shared future for mankind’ Xi’s, and Chinese intent today, is to achieve great power status, and still more to ensure acknowledgement of its status by other countries. Unstated, but obvious, is that countries such as India should accommodate China’s rise, and not cavil at this or pose a challenge to it.

Increasing resort to confrontational politics, in substance as well as in style, aggravates this situation further. Combined with constant references to superior capabilities, it creates a psychological impact on China’s thinking, viz, an exaggerated respect for their own strengths — including military — and a willingness to go to any extent to ensure its self-respect. Defusing tensions demands patient diplomacy, but it is not a character trait that Xi demonstrates. Even less, he shows a willingness to moderate ambition or take a step backward.

New Delhi must reach out

INDIA needs a carefully drawn-up plan as also an effective strategy to deny Beijing its immediate objectives, including its determination to establish regional dominance. In this context, India must reach out to its neighbours, and even countries beyond, warning them about falling into the trap of allowing alluring prospects of both economic cooperation and military support for the maintenance of peace, to cloud their thinking. It might well be the case that the current regime in China may be manufacturing crises to play to a domestic audience, in part due to economic compulsions, but India must be on its guard. For this purpose, India must be prepared militarily and otherwise to keep a check on China’s burgeoning ambitions. It also needs to take care to see that China does not exploit the present pandemic to deepen its influence in India’s neighbourhood, as is patently evident from reports of China’s plans to provide access to China’s coronavirus vaccine to several countries of Asia and Africa.