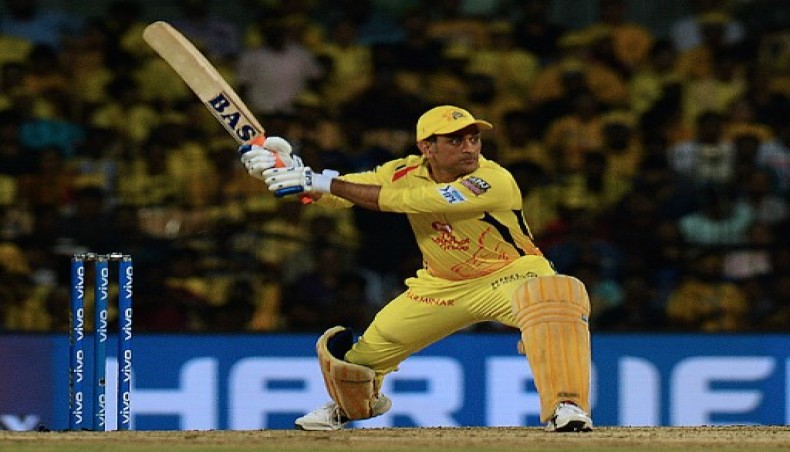 Dhoni, the Chennai captain, sent up young England allrounder Sam Curran and Indian Premier League debutant Ruturaj Gaikwad ahead of him in his team's chase of 217 in Sharjah, United Arab Emirates, on Tuesday.

Finally coming into bat in the 14th over, the veteran wicketkeeper-batsman scored just 10 runs off his first 13 balls while partner Faf du Plessis was on a hitting spree in his 72-run blitz including seven sixes.

The former India skipper, who announced his international retirement last month, only got going in the final over to hit three successive sixes but by then the chase was beyond Chennai who lost by 16 runs.

‘This is not what you call leading from the front. Batting at No. 7 when you're chasing what...213 (217)? The game was over. Faf was probably the lone warrior,’ former India opener Gautam Gambhir told ESPNcricinfo.

‘Yes, you can talk about MS Dhoni's last over, but it was of no use to be honest. It was just all personal runs.’

Curran had smashed 18 off six balls after being promoted ahead of Dhoni, who last played in India's semi-final exit of the 2019 World Cup, in Chennai's win over holders Mumbai Indians in the IPL opener last week.

Dhoni, known for his finishing skills during the peak of his international career, said his lack of time in the middle prompted him to shuffle the batting order.

‘I haven't batted for a long time. 14-day quarantine (in the United Arab Emirates) doesn't help,’ Dhoni, who remained unbeaten on 29, said in the post-match chat.

Chennai coach Stephen Fleming told reporters, ‘MS is a specialist at the end of the innings, always has been.’

But the statements cut little ice with fans who criticised their cricketing hero with one Twitter user saying, ‘Next time Dhoni should warm-up before the match and not during the match’.

Dhoni though got some support from his fans who took note of his three big sixes with one hit going out of the Sharjah stadium.

The 39-year-old Dhoni has come under fire for batting slowly in the slog overs during last year's 50-overs showpiece event.