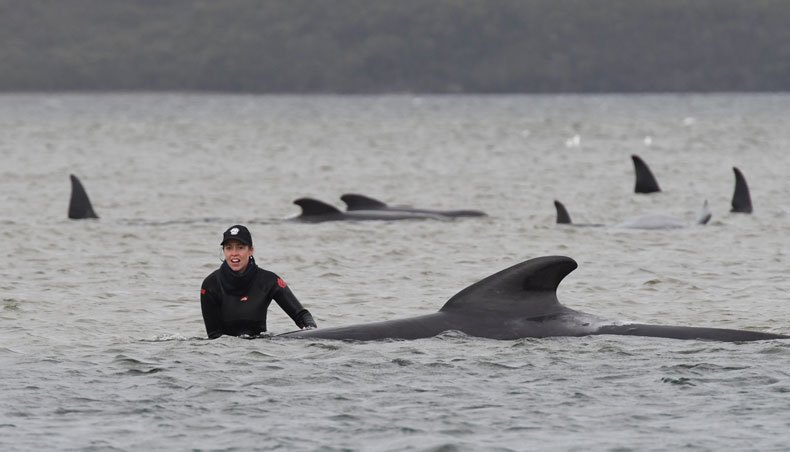 Rescuers work to save a pod of whales stranded on a sandbar in Macquarie Harbour on the rugged west coast of Tasmania on September 22, 2020. — AFP photo

At least 380 whales have died in a mass stranding in southern Australia, officials said Wednesday, with rescuers managing to free just a few dozen survivors.

Nearly the entire pod of 460 long-finned pilot whales stuck in Macquarie Harbour, on the rugged and sparsely populated west coast of Tasmania, has now perished.

‘We have got a more accurate count and we can confirm that 380 whales are dead,’ Tasmania’s Parks and Wildlife Service manager Nic Deka said.

‘There’s around 30 left still alive but the good news is that we have saved 50,’ he said, describing the rescue effort as emotionally taxing.

The first of the giant mammals were found on Monday, sparking a major effort to free them from a sandbar only accessible by boat.

It is the largest mass stranding ever recorded in Tasmania, an island state off mainland Australia’s south coast, and likely the biggest in the country’s history.

A rescue crew of 60 conservationists, skilled volunteers and local fish farm workers has concentrated efforts on a group of whales partially submerged in the water.

The rescuers have spent two days wading in the cold shallows to free the still living creatures, using boats fitted with special slings to guide them back to the open ocean.

They are now racing to free as many of the 30 remaining live whales as possible.

‘They’re focused on the job — it’s demanding work, some of them are up to their chest in cold water so we’re trying to rotate the crews,’ Deka said.

The whales have been found stranded up to 10 kilometres apart, and officials have now expanded their search area to see if more of the mammals are stuck nearby.

Some of the whales rescued Tuesday re-stranded overnight, in line with predictions by whale behaviour experts, but Deka remained upbeat about the immediate prospects for those that remained in the ocean.

‘The good news is the majority of whales that were rescued are still out in deep water and swimming,’ he told reporters in the nearby town of Strahan.

‘They haven’t stranded. So we’ve been more successful than not.’

The causes of mass strandings remain unknown — even to scientists who have been studying the phenomenon for decades.

However, some researchers have suggested the highly sociable pilot whales may have gone off track after feeding close to the shoreline or by following one or two whales that strayed.

Tasmanian environment department marine biologist Kris Carlyon said it was a ‘natural event’ with strandings of the species occurring regularly throughout history in both southern Australian and neighbouring New Zealand.

‘We do step in and respond in these situations, but as far as being able to prevent these occurring in the future, there’s really little that we can do,’ he said.

Carlyon said animal welfare issues were a major reason authorities and conservationists intervened in mass strandings, along with public expectations and the ability to learn more about a species.

It would have been a ‘hugely stressful’ experience for the whales that were freed, he said, but past events showed they were likely to thrive in the wild.

‘We have shown fairly conclusively that animals will regroup, they will reform those social bonds, and they will — at least in the short- to medium-term for the duration that they’ve been tracked — demonstrate normal and natural behaviour,’ Carlyon said.

Officials will now turn their attention to the disposal of the whale carcasses, with assessors arriving onsite Wednesday to create a clean-up plan.

‘As time goes on (the whales) do become more fatigued so their chances of survival reduces,’ Deka said.

‘But we’ll keep working as long as there’s live animals at the site.’