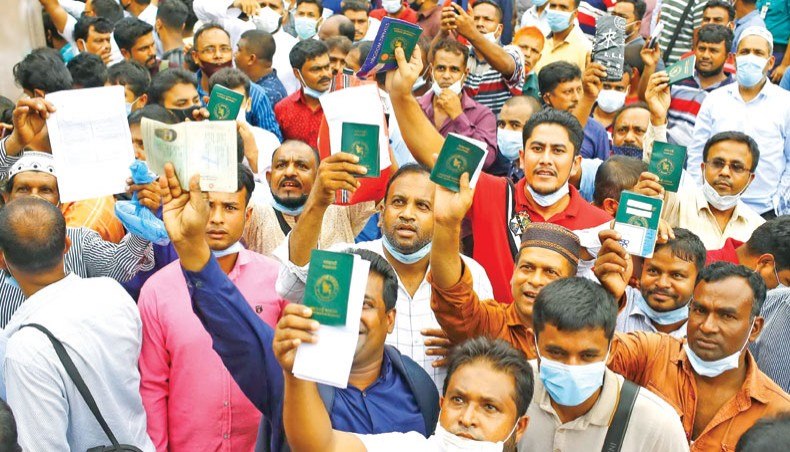 Migrant workers crowd in front of the Saudia airline office at Karwan Bazar in Dhaka for confirming their tickets on Monday as the airline officials struggle to cope with the rush of passengers willing to join their work in Saudi Arabia. — Sourav Lasker

Bangladesh had sought one more extension of three months from Saudi Arabia for Bangladeshi valid visa holders and their valid work permits in an effort to help workers return to their work.

The Saudi government had so far extended the validity of work permitsfor Bangladesh citizens thrice who got stuck here due to COVID-19 pandemic.

The latest extension term will expire on September 30.

Bangladesh embassy to Saudi Arabia has written a letter to the Saudi foreign ministry seeking an extension of three months beyond September 30, said an official.

On Monday, Biman Bangladesh Airlines managing director MdMokabbir Hossain said that they got approval to operate flights to Saudi Arabia from October 1.

Landing permission is required before beginning of seat reservation. But Saudi Arabia is yet to provide it, he said.

‘So, now it’s not possible to start allocating seats for the passengers,’ the MD said, adding that flights will be announced as soon as landing permission is received.

He also requested passengers not to gather at the counters before the flight announcement.

Saudi Arabia was the most popular destination for migrant workers from Bangladesh. Last year, Bangladeshi migrants sent back $18.355 billion. Of the amount, $3.647 billion were sent from Saudi Arabia.

Meanwhile, a group of Bangladeshi migrant workers demonstrated at Karwan Bazar on Tuesday morning demanding tickets to Saudi Arabia so that they could join their workplaces.