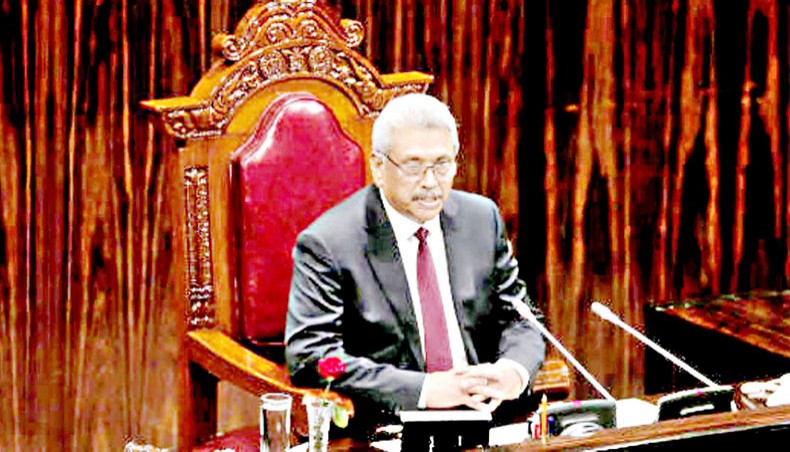 THE government has announced that the draft 20th amendment bill will be presented to parliament on Tuesday. It will be the same version that caught the country by surprise when it first made its appearance to the public on September 3. The extreme nature of the proposed amendment, which has been the cause of much disquiet, is epitomised by the power it seeks to give the president to sack the prime minister and ministers at his discretion and to dissolve parliament after a year of its election. Undoubtedly it was concerns within the ranks of those elected to parliament from within the government side itself that prompted prime minister Mahinda Rajapaksa to appoint a committee consisting of parliamentarians of stature to give their opinion on the proposed 20th amendment and to suggest further amendments to it.

There are disturbing features about the draft 20th amendment. The most significant is the overwhelming power it seeks to give the institution of the presidency by transferring the powers currently vested in other institutions to it. The proposed amendment immediately evoked protests from the opposition political parties and civil society and was soon followed by more subdued expressions of dissent from within the government itself. Government members have not openly criticised the erosion of parliamentary powers but instead appear to have chosen the option of stating their objections to less significant clauses in the proposed 20th amendment. One of these is the removal of the ban on dual citizens from contesting for political office and the removal of the oath against promoting separatism in the country.

Another concerning feature of the 20th amendment is the unwillingness of anyone to claim the responsibility for its creation. It can be expected that those elected to parliament would not wish to take the responsibility for the proposed amendment which seeks to erode their own position. This has resulted in president Gotabaya Rajapaksa stepping forward to take responsibility as the head of the government along with the rest of the government as a collective group. The president may be feeling the burden of the heavy responsibility placed upon him by popular expectations. His frustrations are becoming more evident as he has begun pointing out the inefficiencies that exist in not only the governmental system but also the wider society. These inefficiencies in the public service can be attributed to politicisation during the past decades for which past administrations have to take equal responsibility.

THE parliamentary committee appointed by the prime minister to look into the issues arising out of the draft amendment has not presented their conclusions to the general public or incorporated their ideas into the draft amendment. As a result it will be the same draft that made its appearance on September 3 that will be presented to parliament. It appears that the government’s current position is that the 20th amendment bill will be presented to parliament in its original formulation and changes to it, if any, will take place in the course of the parliamentary debate regarding it. This could be politically astute, from the government’s perspective. From a political transformative perspective it offers scope for parliamentarians to engage in a meaningful process of consultations to achieve sufficient consensus following an intellectual discourse.

There are, however, two consequences that flow from the direct presentation of the draft amendment to parliament without any changes. On the one hand, this will have the adverse effect of making it more difficult for those opposed to the draft amendment to take it before the courts of law. As they will have only a limited time frame of one week to file their cases in the courts, they will have to file their objections to the original version of the 20th Amendment and not to the subsequent changes that may take place as a result of the parliamentary process. A second consequence flowing from the strategy of seeking amendments to the draft 20th amendment in parliament itself is that it will conceal the division within the government on the question of the amendment.

The government’s decision not to share the results of the deliberations of the prime minister’s committee with the general public could be due to the concern that the division of the government members into two camps will be seen. On the other hand, a debate in parliament will bring in the opposition political parties so that the lines of division would be more complex. For instance, the opposition parliamentarians would not wish the president to have the power to dissolve parliament after the passage of one year, which is likely to be shared by government members also. On the other hand, the opposition is also likely to bring up other issues such as the need to safeguard the independence of institutions such as the courts of law and the auditor general’s office.

THE 20th amendment is a reaction to the problems in the 19th amendment which showed the possibility of deadlock within the executive branch of government when the president and parliamentary majority were of two minds. President Gotabaya Rajapaksa is reported to have informed the cabinet of ministers that without the changes proposed in the draft 20th amendment it was difficult to run the country. However, the parliament was also elected by the people and has a five year mandate and the powers being withdrawn are so significant that they may require a referendum. Indeed, parliament is more representative of the plural and diverse nature of society and of the different ethnic and religious communities and needs to be empowered rather than being disempowered.

Among the extreme features of the proposed 20th Amendment is the power to be transferred to the president to appoint all judges and top state officials at his discretion and to exclude many government departments and government-owned entities from being centrally audited. The question is why an equally sovereign body that is parliament is denied this power. The fate of the strong government that was elected in 2010 in the aftermath of the end of the three decade long war, which pledged to develop the country, and of which much was expected, and which failed, must not happen again. The main flaw there was that power was centralised in the institution of the presidency at the expense of the others and corruption and abuse of power got out of control.

Strong governments in which one institution dominates all others and in which there are no checks and balances rarely deliver good results to the people so that they enjoy the benefits of development and the protection of human rights. Strong governments that deliver both, of which there are many examples in the world and particularly in the Western world but now also in the eastern countries such as Japan and South Korea, operate under the rule of law, with checks and balances and take severe action against those found engaging in corrupt practices. They are an outcome of disciplined systems of government which deliver constructive results to the people over the longer term. Recent examples of South Korea and Malaysia are cases in point.