Another rape, DSA case against Nur, 5 others 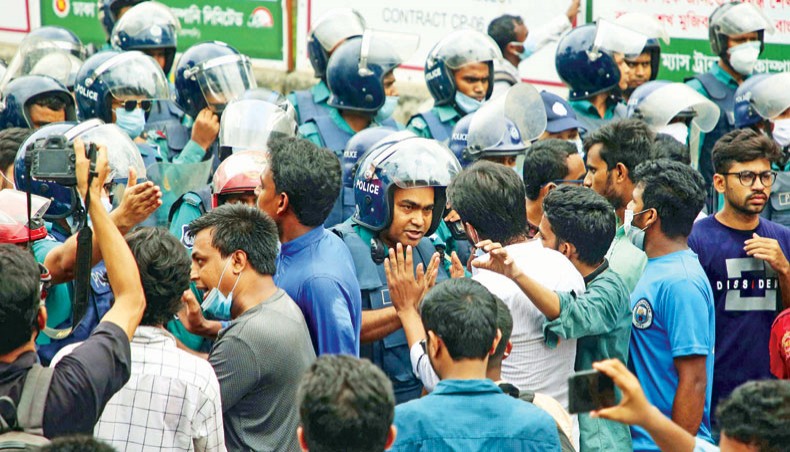 Police stop a procession of Chhatra Odhikar Parishad at Shahbagh brought out from the National Press Club in Dhaka on Tuesday protesting against the ‘police assault’ on them on Monday night. — Sony Ramany

The same female student, who had filed a rape case with the Lalbagh police station on Monday against Nurul Haq Nur and five others, filed a fresh case against them on Tuesday over abduction and rape in collusion with each other and demeaning her on social media.

The new case was filed with the Kotwali police station in Dhaka late on Monday evening.

Nur is the immediate-past vice-president of the Dhaka University Central Students’ Union.

But Hasan was made the prime accused, who committed the rape, in the case filed with the Lalbagh police station on Sunday, said police.

The 22-year-old complainant in her first case had alleged that Hasan ‘cheated’ her with a ‘false’ promise of marriage and ‘raped’ her on January 3, 2020.

According to the fresh case, Nazmul raped her on a Chandpur-bound launch in early February this year.

The complainant claimed that she had complained to Nur who assured her of justice at first, but later threatened her with social harassment if she did not remain silent on the issue.

Contacted, Nur told New Age that the female student called him over cell phone a few months earlier during the COVID-19 lockdown.

‘She told me that she was in an affair with one of our fellow students and they were having some issues in their relationship. She requested me to broker reconciliation between them. I have never met her or talked to her since,’ Nur said.

Nur alleged that these cases were conspiracies against him and his fellow activists.

The former DUCSU VP and six others were first detained from a protest near the Matsya Bhaban on Monday night.

After a brief detention, he was released and taken to Dhaka Medical College Hospital for medical check-up.

Police officer Walid said that they had released Nur and others on an undertaking that they would not create ‘anarchy’ on the streets and ‘disrupt’ vehicular movement and the public life.

Meanwhile, Chhatra Odhikar Parishad, which spearheaded the countrywide quota reform movement in 2018, brought out a protest procession from the National Press Club to Shahbagh against what they said police assault on them on Monday night.

They also demanded the withdrawal of false cases against Nur and others.

Kotwali police station officer-in-charge Mizanur Rahman said that the same female student, who had filed the case against Nur and others with the Lalbagh police station, filed the new case with them.

The accused in the fresh case are also the same with Nur being the third of them in both cases, said police.

Senior DB officers said that these were sensitive cases and police were investigating them with high priority, adding that police had already talked with the complainant and were trying to determine what roles Nur played in the incidents.

Walid further said that a general dairy was filed with the Shahbagh police station on charge of assault on police on Monday without mentioning the names of the accused.

The female student’s case was lodged under the Women and Child Repression Prevention Act and the Digital Security Act, added Walid.

Chhatra Odhikar Parishad complained that policemen attacked them on Monday night when several students were injured, who underwent treatment in DMCH.

The parishad activists on Tuesday demonstrated in front of the National Press Club against police assault on them and false cases against their leaders.

They said that policemen attacked the activists with iron rods and sticks on Monday night.

They claimed that the cases against Nur and others were part of the government’s conspiracy against the student rights movement.

The rally paraded different areas of the Dhaka University campus and ended at the Shahbagh inter-section.