Djokovic back on track with fifth Rome title 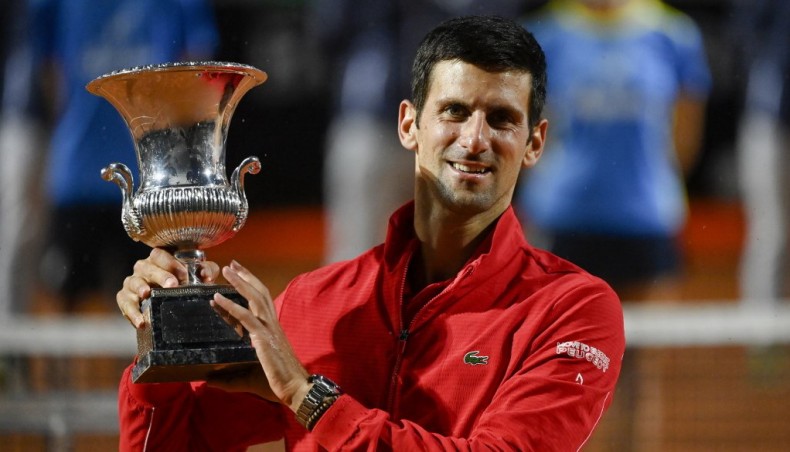 Serbia's Novak Djokovic poses with his trophy after defeating Argentina's Diego Schwartzman in the Italian Open final at the Foro Italico in Rome on Monday. — AFP photo

Novak Djokovic picked up where he left off before his US Open default two weeks ago, winning a fifth Italian Open title on Monday, days before the start of Roland Garros.

The world number one lifted a record 36th Masters crown, one more than great rival Rafael Nadal, after beating Diego Schwartzman 7-5, 6-3 in the final at the Foro Italico in Rome.

‘Turning to Paris, I couldn't ask for a better tournament here in Rome. Another big title and I'm super pleased,’ said Djokovic.

Djokovic extended his record to 31 wins from 32 matches this year, with his only loss the US Open disqualification for accidently hitting a line judge with a ball.

But he ran out of steam in a final played under light drizzle, having also spent more than three hours on the court in Sunday's semi-finals.

Despite a great start, with two breaks to lead 3-0, Schwartzman could not keep the momentum going against the 17-time Grand Slam winner, who notched up his fifth win over the Argentinian.

For Djokovic it was a fifth victory in 10 finals in Rome, but the first since 2015, having finished runner-up three times since including last year to Nadal.

‘It's been a good week, even if I haven't played my best tennis. I'm satisfied,’ said Djokovic.

Top women's seed Simona Halep lifted her first trophy in Rome, a confidence booster ahead of the French Open, after defending champion Karolina Pliskova retired injured while trailing 6-0, 2-1 in the final.

World number two Halep was competing in her third Rome WTA final, having finished runner-up in 2017 and 2018.

Halep said she was approaching Roland Garros ‘without pressure, smiling,’ despite the 2018 winner now being among the favourites.

‘It's just another tournament. I'm not going to put pressure on myself,’ the Wimbledon champion insisted.

‘I played really well this year. I have three titles already. I played so much on clay. I feel confident.

‘I just try to be happy, to take the positives from this tournament, and to go there smiling.’

Pliskova's title defence was hampered due to pain in her left thigh.

‘It was growing worse and worse with every day,’ she said.

‘This morning I even wondered if I was going to play, but you still want to try,’ said the Czech, who ‘hopes’ to recover in time for Roland Garros.

Swept aside 6-0 in the first set, she seemed to recover in the second and had just won her first game when she headed for Halep to call time on her match.

For Halep it was a third tournament win this year after Dubai in February and Prague last month, to extend her winning streak to 14 consecutive matches.

The 28-year-old Romanian did not compete in the US Open because of coronavirus fears, but said she had felt safe in the Italian capital.

‘I want to thank everyone because the tournament went well, and in these conditions it's not easy,’ she said.

‘We felt really safe and really good on and off the courts, even though we stayed often in our hotel rooms. We accepted it, because we like to play tournaments.’