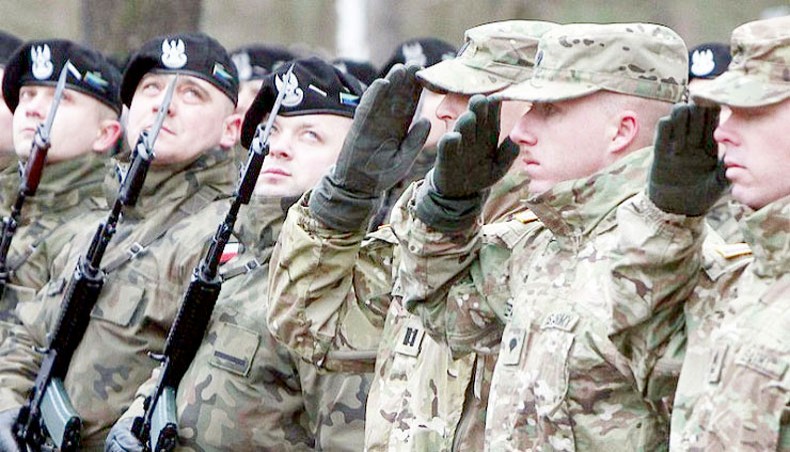 WHEN the US announced it would be reducing the number of its troops stationed in Germany many hoped in vain it would be the beginning of an overall reduction of US forces in Europe and a de-escalation of tensions between the US, the North Atlantic Treaty Organisation and the Russian Federation.

Many others, however, easily predicted these forces would simply be moved elsewhere in Europe and most likely eastward even closer to Russia’s borders and, as a result, increasing tensions.

AP reported in its article, ‘Pompeo inks deal for US troop move from Germany to Poland,’ that:

‘Some 4,500 US troops are currently based in Poland, but about 1,000 more are to be added, under a bilateral decision announced last year. Last month, in line with president Donald Trump’s demand to reduce troop numbers in Germany, the Pentagon announced that some 12,000 troops would be withdrawn from Germany with about 5,600 moving to other countries in Europe, including Poland.’

The article would add, in an attempt to explain the presence of US troops in Europe and their creep ever eastward, that:

‘Pompeo has used his Europe trip to warn the region’s young democracies about threats posed by Russia and China and has received a warm welcome.’

What threats would those be?

NATO’s creation and use as a balance of power during the Cold War could be argued, but since the collapse and eventual dissolution of the Soviet Union in 1991, NATO has not only continued to expand in membership including nations sitting directly on Russia’s borders, it has expanded in scope, participating in wars of aggression stretching from Africa to Asia.

If it were ever a tool to maintain a balance of power between East and West, it has since transformed into a bludgeon to fully exploit a perceived absence of it in its favour.

From Libya to Iraq to Syria to Afghanistan, NATO members have destroyed one nation after another from the turn of the century and continue doing so to this day.

A 2011 article in The Atlantic titled, ‘The Arab Spring: A Virus That Will Attack Moscow and Beijing’,’ quoted US senator John McCain as saying:

‘A year ago, Ben-Ali and Gaddafi were not in power. Assad won’t be in power this time next year. This Arab Spring is a virus that will attack Moscow and Beijing.’

The article’s author would then note:

‘Senator McCain’s framing reflects a triumphalism bouncing around at this conference. It sees the Arab Spring as a product of Western design — and potentially as a tool to take on other non-democratic governments.

‘At an earlier session, senator Udall said that those who believed that the Arab Spring was an organic revolution from within these countries were wrong — and that the West and NATO in particular had been primary drivers of results in Libya — and that the West had helped animate and move affairs in Egypt. Udall provocatively added Syria to that list as well.’

Without a doubt, and even according to US newspapers like the New York Times, the Arab Spring was most certainly ‘a product of Western design’ and in hindsight it cannot be disputed that the US and NATO in particular had been ‘primary drivers of results in Libya’ with the alliance having used direct military force to topple the Libyan government.

In hindsight we can also see the swath of absolute devastation left in the wake of this ‘product of Western design,’ with turmoil consuming North Africa, the Middle East and Central Asia.

After threatening Russia (and China) that this ‘product of Western design’ was ultimately aimed at them, McCain would eventually tour the pile of rubble that once was Libya as well as visit the fringes of Syria’s still active battlefields.

Can anyone honestly decouple threats like those of McCain against Moscow and Beijing and the visible destruction created as a result of Western military aggression all along Russia’s and China’s peripheries?

AT THE beginning of World War II Nazi Germany used an offensive form of warfare against Russia known as blitzkrieg. It first amassed troops along the border with Russia and then attempted to deliver a swift, focused blow aimed at Moscow to overwhelm Russian forces before they could mobilise and react.

Like many other invasions of Russia throughout history, Germany’s invasion failed and blitzkrieg, while successful against France, Belgium and Poland and even initially successful against Russia, was found to be ill-suited for the depth and distances required to conquer Russia’s sheer geographical size.

It seems like a slow-motion version of Nazi Germany’s blitzkrieg, but instead of attempting to plow over Russia before winter comes as the Nazis attempted in June of 1941, it is instead methodically dissecting Russia’s allies abroad, smothering it along its borders, undermining and attempting to isolate it economically while attempting to foment the same sort of political subversion that kicked-off the Arab Spring in 2011 within Russia’s borders.

Policy circles in Washington and Brussels like to refer to its rivalry with Russia and China as a ‘great power game.’ Considering what the West has done to lesser pawns in this game, nations like Libya, Syria, Iraq, Afghanistan and Yemen, to those in Moscow or Beijing it doesn’t feel like a game.

It remains to be seen where other troops leaving Germany will be stationed but it is almost a certainty they will not be going back to the United States, and instead, will be heading further east.

The US and NATO attempt to portray Russia as the villain of this story for bolstering troops along its western borders in response. But these are Russian troops, inside of Russia and Russian troops facing off against the growing presence of US troops just on the other side.

The US has crossed an ocean and a continent to find itself on Russia’s doorstep. These are also US troops that have laid waste to several nations including and especially former Soviet allies and until their destruction, allies of the Russian Federation.

AP and others in the Western media refuse to state the obvious, but NATO’s existence since the fall of the Soviet Union has been a multi-decade, multi-trillion dollar slow-motion blitzkrieg that has already destroyed entire nations, is destroying many more now and poses as the most pressing threat to global peace and stability today.

When US secretary of state Mike Pompeo claims Russia and China pose ‘threats’ to the world, there remains the inescapable fact that the US and NATO are the only nations in the 21st century invading and destroying other nations, creating conflict consuming entire regions of the planet and building up troops along the borders of the few nations left outside Western domination.

Until Russia and China do likewise, it is clear the only threat the US and NATO really face is reaching the limits of their abuses, or eventually even having to pay for them.