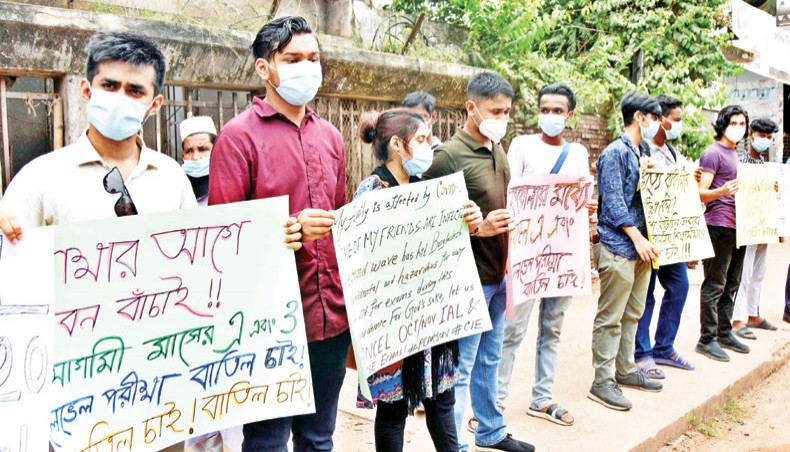 English medium students form a human chain in front of the National Press Club in Dhaka on Sunday demanding postponement of O-level and A-level examinations due to the coronavirus crisis. — New Age photo

The British Council approached the education ministry on Sunday seeking permission to hold A-level exams from October 1 while students from a human chain in front of the National Press Club demanded postponement of the exams amid COVID-19 outbreak.

‘We told them that we would inform them of the decision on Monday after talking to the education minister,’ Mominur said.

Meanwhile, private candidates and students of different schools, holding a human chain programme in front of the National Press Club demanded postponement of the O-level and A-level examinations arguing that they were afraid of taking such exams amid the COVID-19 situation.

They said that they feared getting infected with the virus and not scoring expected marks in the exams as the educational institutions remained closed from March following the government order after the outbreak of the virus, they said.

‘Now, we demand government intervention to postpone the examinations despite the fact that O-level and A-level examinations are conducted centrally by Cambridge International and Pearson Edexcel,’ said Mehrab, a private student.

‘But, we are also citizens of a state and feel that there are risks involved in taking an exam amid the spread of the highly contagious novel coronavirus. So the government should try to convince the authority to postpone the exams,’ he added.

Green Gems International School principal GM Nizamuddin, who is also general secretary of Bangladesh English Medium school association, said that they had not yet received any instruction from the British Council for holding the exams.

‘But, we are ready to take preparations within a short notice,’ he said.

The British Council officials did not reply to New Age when asked about the issue.

The Cambridge International’s country manager Shahin Reza said that there was no possibility of postponement as schedules were announced centrally from the UK for holding the exams simultaneously across the globe.

‘If the government does not allow for holding the exams for the COVID-19 crisis, the Bangladeshi students will have to sit for the exams in the next schedule which is in summer,’ he said.