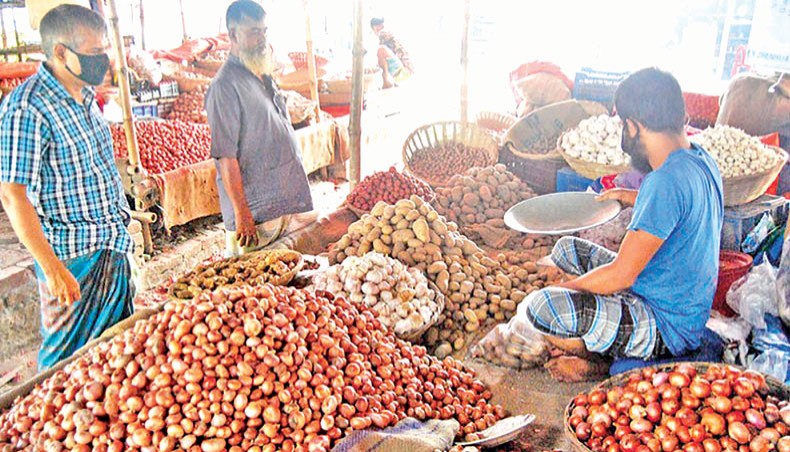 A file photo shows a vendor sells different commodities including onions at a kitchen market at Matuail in the capital on Friday. The price of onion remained high despite decreasing slightly on the city markets on Sunday amid news of import of the item from different destinations.— Focusbangla photo

The price of onion remained high despite decreasing slightly on the city markets on Sunday amid news of import of the item from different destinations.

The government on Sunday withdrew 5 per cent customs duty on import of onions to check further price hike of the item on the local market.

Traders said that both the wholesale and retail prices of onion decreased by Tk 5-10 a kilogram on the city markets on Sunday as India on Saturday released onion-laden trucks which had been stranded at land ports between Bangladesh and India since India issued a notice banning onion export on September 14.

They said that onion imported from Myanmar had also begun to hit the markets and the price of the commodity had fallen slightly due to increased supply.

The wholesale price of local onion was Tk 70 a kg while the imported item sold for Tk 55-60 a kg at Shyambazar on Sunday.

Importers said that although India released some shipments of onions to Bangladesh on Saturday, no truck carrying the commodity entered Bangladesh through the land ports on Sunday.

Meanwhile, commerce minister Tipu Munshi on Sunday launched online sales of onion at Tk 36 a kg for the consumers of Dhaka and Chattogram cities.

He said that a portion of onion procured by the Trading Corporation of Bangladesh would be sold through online platforms.

The minister said that both TCB and private sector businesses would import huge quantities of onions from alternative sources and there would be no shortage of the item on the market.

A press release issued by the finance ministry on Sunday conveyed the government decision to withdraw 5 per cent customs duty on imported onions and said that it would remain valid up to March 2021 which is considered as the off-season for the item.

The National Board of Revenue will soon issue a statutory regulatory order making the decision effective.

The press release said that the prices of onions had marked a sharp rise on the local market due to the export ban imposed by neighbouring India.

It also said that the onion market was made volatile in the recent past with the crisis becoming acute in 2019-20.

The government, according to the press release, had imposed the duty to discourage import of the item in peak seasons to ensure fair price for local onion growers.

On September 16, finance minister AHM Mustafa Kamal said that the government was considering a proposal to waive the duty on onion import.

Earlier on September 7, the commerce ministry requested the NBR to withdraw the duty to keep the onion price stable but the NBR on September 14 rejected the request arguing that the duty was imposed to ensure fair price for farmers and encourage domestic production of the item.

It also argued that the 5-per cent duty would not create any negative impact on the onion prices.

The commerce ministry on the same day again requested the NBR to withdraw the duty at least for the lean season up to March.

Earlier in a notice issued on September 14, the Directorate General of Foreign Trade under the commerce ministry of India prohibited export of all varieties of onions until further notice.

The price of onion shot up to Tk 120 a kilogram from Tk 70 a kg on the city markets on September 15 after the export ban.