Another Afghan peace push and a role for India 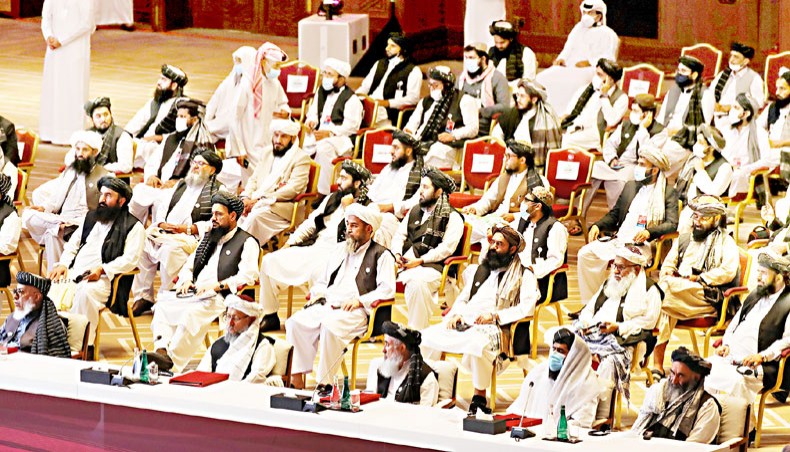 Members of the Taliban delegation attend the opening session of the peace talks between the Afghan government and the Taliban in the Qatari capital Doha on September 12. — Agence France-Presse/Karim Jaafar

New Delhi’s engagement after America’s exit must build on its resonating vision of a stable and plural Afghanistan, writes Rakesh Sood

ON SEPTEMBER 12, the much awaited intra-Afghan talks between the Taliban and the Afghan High Council for National Reconciliation opened in Doha, Qatar, 19 years after the 9/11 attacks on the US that stunned the world and marked the beginning of the US war in Afghanistan against al Qaeda and the Taliban, its local sponsors. The initiation of intra-Afghan talks was a key element in the US-Taliban peace deal signed in Doha on February 29 between the US special representative for Afghanistan reconciliation, ambassador Zalmay Khalilzad, and the Taliban deputy leader, Mullah Abdul Ghani Barader. Originally planned to begin on March 10, the process had to overcome many hurdles along the way providing a small glimpse of the difficult road that lies ahead.

THE Trump administration soon realised that its 2017 policy of breaking the military stalemate by a small increase in US troops was not working and reverted to seeking a managed exit. As the former defence secretary James Mattis put it, ‘The US doesn’t lose wars, it loses interest.’ Political optics demanded a relabeling of the withdrawal.

Originally ambassador Khalilzad had spelt out four objectives: an end to violence by declaring a ceasefire; an intra-Afghan dialogue for a lasting peace; the Taliban cutting ties with terrorist organisations such as al Qaeda, and US troop withdrawal. Within months, the Taliban had whittled these down to just the last one with some palliatives regarding the third. Instead of an Afghan-led, Afghan-owned and Afghan-controlled reconciliation, it had become a US-led and Taliban-controlled process with nobody claiming ownership or responsibility. Timelines were fixed for the US drawdown by mid-June (followed by complete withdrawal by April 2021) and for removal of Taliban from the UN Security Council sanctions list by end-May. The Taliban have released 1,000 members of Afghan security forces and the Afghan authorities have freed over 5,000 Taliban from their custody. This process took longer than originally foreseen but has now been completed. The two elements that remained open ended in the US-Taliban deal are the ceasefire declaration and the intra-Afghan talks.

BY END-JUNE, the US had reduced its troop presence to 8,600 as promised and in early September, central command commander Gen Kenneth McKenzie indicated that by November, the numbers would be down to 4,500. Despite two brief day truces in May and August for Eid-al-Fitr and Eid-al-Adha, the levels of violence showed no respite.

Speaking the Doha at the opening session, Dr Abdullah Abdullah, chairman of the high council regretted that more than 12,000 Afghans had been killed and another 15,000 injured since end-February. The number of attacks on government security forces and installations averaged over 80 a week.

A report by the US special inspector general for Afghanistan reconstruction issued in July covering the second quarter of 2020 assessed that ‘The Taliban is calibrating its use of violence to harass and undermine the Afghan national defence and security forces and the Afghan government, but remain at a level it perceives is within the bounds of the agreement, probably to encourage a US troop withdrawal and set favourable conditions for a post-withdrawal Afghanistan.’ The report expressed scepticism about whether the Taliban had cut ties with al Qaeda and stated that ‘the Islamic State-Khorasan maintains the ability to conduct mass casualty attacks’. A UN analytical support and sanctions monitoring team report concerning the Islamic State and al Qaeda (also issued in July) concluded that ‘Al Qaeda in Indian subcontinent continues to operate under the Taliban umbrella in Nimroz, Helmand and Kandahar provinces’ with reportedly 400–600 fighters in the country.

PERHAPS nothing reflects the challenges facing the intra-Afghan negotiations more starkly than the title of the US-Taliban Doha deal – ‘Agreement for Bringing Peace to Afghanistan Between the Islamic Emirate of Afghanistan Which Is Not Recognised by the United States as a State and Is Known as the Taliban and the United States of America’. This awkward phrase is repeated more than a dozen times in the agreement. The leader of the Haqqani Network, Sirajuddin Haqqani, who is also the second-in-command of the Taliban happens to be on the US wanted list with a reward of $10 million for information leading to his capture or death. All this is difficult to reconcile with the notion that the US considers the Taliban a partner in counter-terrorism operations against the IS and other terrorist groups.

In an op-ed in The Washington Post on August 14, Afghanistan president Ashraf Ghani wrote that ‘the Afghan people want peace’ and that is why the government ‘made the decision to take another risk for peace’. Calling on the Taliban to sit across from Afghan representatives to arrive at a political resolution, he added that ‘we acknowledge the Taliban as part of our reality’ and urged that ‘the Taliban must, in turn, acknowledge the changed reality of today’s Afghanistan’.

The current reality is that 74 per cent of Afghan population is below 30 and has lived, for most part, in a conservative but open society. However, the Taliban continue to maintain the Kabul administration as an imported western structure for continued American occupation. Senior members of the Afghan government continue to be targeted including vice-president Amrullah Saleh who narrowly escaped an IED attack on his motorcade on September 9, even as 10 innocent Afghans lost their lives.

ADDRESSING the opening session of the Doha meeting, India’s external affairs minister S Jaishankar reiterated that the peace process must be ‘Afghan-led, Afghan-owned and Afghan-controlled’ but Indian policy has evolved from its earlier hands-off approach to the Taliban. Speaking to Indian media a few months ago on separate occasions, both ambassador Khalilzad and Russian special envoy to Afghanistan ambassador Zamir Kabulov bluntly pointed out that if India had concerns regarding anti-India activities of terrorist groups, it must engage directly with the Taliban. In other words, if India wanted to be invited to the party, it must be prepared to get up and dance.

THE reality is major powers have limited interests. For the US, the peace talks provide US president Donald Trump an exit opportunity weeks before his re-election bid. The European Union has made it clear that its financial contribution will depend on the security environment and the human rights record. China can always lean on Pakistan to preserve its security and connectivity interests. For Russia, blocking the drug supply and keeping its southern periphery secure from extremist influences is key. That is why no major power is taking ownership for the reconciliation talks, but merely content with being facilitators.

A report issued last month by the Heart of Asia Society, a Kabul-based think tank observes that ‘the prospect for peace in Afghanistan depends on regional consensus to support the peace process as much as it depends on actual progress in the intra-Afghan talks’. India’s vision of a sovereign, united, stable, plural and democratic Afghanistan is one that is shared by a large constituency in Afghanistan, cutting across ethnic and provincial lines. A more active engagement will enable India to work with like-minded forces in the region to ensure that the vacuum created by the US withdrawal does not lead to an unravelling of the gains registered during the last two decades.

TheHindu.com, September 19. Rakesh Sood is a former ambassador to Afghanistan and currently distinguished fellow at the Observer Research Foundation.