Vaccines for the rich 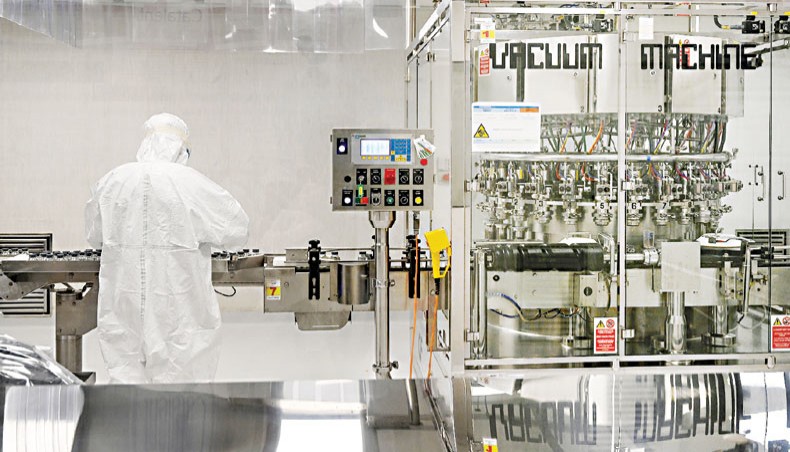 A laboratory technician takes part in filling and packaging tests for the large-scale production and supply of the University of Oxford’s COVID-19 vaccine candidate, AZD1222, conducted on a high-performance aseptic vial filling line on September 11 at the Italian biologics’ manufacturing facility of multinational corporation Catalent in Anagni, southeast of Rome, during the COVID-19 infection, caused by the novel coronavirus.—  Agence France-Presse/Vincenzo Pinto

IT WAS a disappointing headline, but it didn’t come as much of a surprise. It appeared in the Wall Street Journal on September 1, 2020.  It was short and to the point.  ‘Nations With Wealth Tie Up Vaccine Doses.’ That which could be considered a harbinger of the headline, insofar as the United States is concerned, had occurred almost four months earlier.

On May 18, 2020, Trump told the World Health Organisation director-general, Tedros Adhanom Ghebreyesus,  that if the WHO didn’t make ‘major substantive improvements’ within 30 days the United States would permanently withhold future funding and withdraw from the organisation. Always eager to follow through on threats, and by nature, impatient, Trump concluded he could not wait the full 30 days. On May 29, he announced that he was terminating the relationship with the WHO immediately and was withholding all future funding.  He did not address what arrangements he planned to make for the United States to pay the $203 million it owed for 2020 and previous years.

Although this was not addressed in the withdrawal announcement, we have now learned that in addition to saving money by no longer participating in the WHO, Trump is declining to participate in the WHO’s efforts to find a vaccine to treat the pandemic. One hundred seventy-two nations have signed up to be part of a global effort led by the WHO to develop, manufacture and equitably distribute a coronavirus vaccine known as the Covid-19 Vaccines Global Access Facility. The critical word in that description is ‘equitable.’  The undertaking is a joint effort and when a vaccine is found that is effective and safe, all the participants in the project will be promised enough vaccine to cover 20 per cent of their populations.  The vaccine will first be distributed to the high-risk segments of the population of each participating country. It is hoped that there will be 2 billion doses available by the end of 2021.

The WHO project is important for all the participants, but it is especially important for the small nations that are unable to develop or acquire a developed vaccine on their own. By not permitting the United States to participate, Trump is depriving the WHO effort of funding it desperately needs to develop the vaccine. It is also letting it be known that since it is a project of the WHO, Trump doesn’t care what happens to those who will suffer if the project sponsored by the WHO is unsuccessful because of its lack of funding.

Trump’s refusal to participate is not, as one might suppose, the result of mindless truculence. His refusal was eloquently explained by a spokesman for the White House who said: ‘The United States will continue to engage our international partners to ensure we defeat this virus, but we will not be constrained by multilateral organisations influenced by the corrupt World Health Organisation and China.’

By taking this approach Trump is betting on the United States coming up with its own vaccine before those working with the WHO. Should the WHO win the race, the United States would not be entitled to share in the vaccines developed by the WHO. That is not terribly worrisome for Trump. That is because Trump, the European Union, Japan and the UK have already entered into contracts with Western drug makers to purchase 3.7 billion doses of vaccine even though the vaccines have not yet been developed. The purchase agreements include options to buy additional doses. The assumption is that the companies which have contracts will be successful in developing vaccines before the consortium led by the WHO.

Developing countries have reason to be concerned as the Wall Street Journal headline suggests. If the consortium led by the United States beats the WHO to the punch, the less developed countries will be left out. As the assistant director-general at the WHO said, when discussing the upcoming competition to develop the vaccine: ‘Next year is a year of scarce resources. Whatever we have, it won’t be enough to vaccinate everyone.  It is in everybody’s self-interest to collaborate globally because we need this pandemic controlled in all countries.’ Trump and his cronies are oblivious to this need. In a press briefing in June, an administration official said: ‘Let’s take care of Americans first. To the extent there is surplus, we have an interest in ensuring folks around the world are vaccinated.’

As with so many trumpian statements and actions, Trump and his cronies have shown us yet another way Trump is making America great again.  And it gives us all the rest of us cause to pause and consider whether we want to continue to live in a country the greatness of which is being defined by a man of no character and puny intellect.

CounterPunch.org, September 18. Christopher Brauchli is a columnist and lawyer. He is a graduate of Harvard University and the University of Colorado School of Law where he served on the board of editors of the Rocky Mountain Law Review.