US defies world to say Iran UN sanctions back in effect 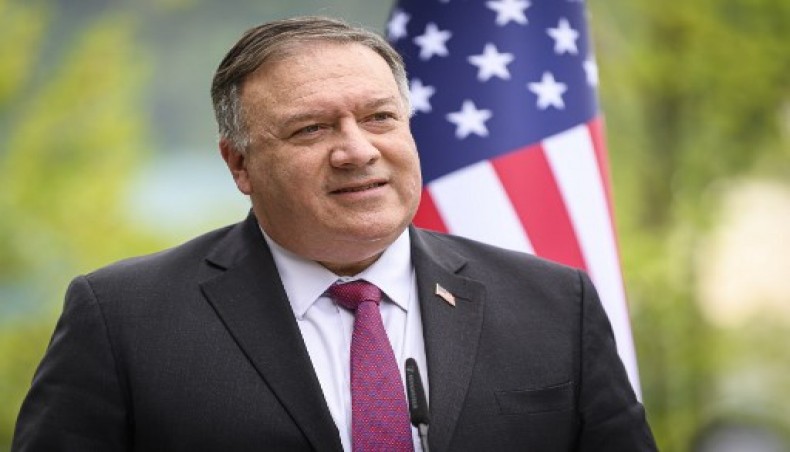 In this file photo taken on August 13, 2020 US Secretary of State Mike Pompeo (L) speaks during a joint press conference with Slovenian Prime Minister (unseen) after their meeting in Bled, in the foothills of the Julian Alps.- AFP photo

The United States unilaterally proclaimed on Saturday that UN sanctions against Iran are back in force and promised to punish those who violate them, in a move that risks increasing Washington's isolation but also international tensions.

‘Today, the United States welcomes the return of virtually all previously terminated UN sanctions on the Islamic Republic of Iran,’ US Secretary of State Mike Pompeo said in a statement.

According to him, the measures were ‘back in effect’ from 8:00 pm Washington time (0000 GMT Sunday).

The government of US President Donald Trump also promised to ‘impose consequences’ on any UN member state which does not comply with the sanctions, even though it is one of the only countries in the world which believes they are in force.

The threat is formidable: those deemed to be in defiance by Washington will be denied access to the US financial system and markets.

‘If UN member states fail to fulfill their obligations to implement these sanctions, the United States is prepared to use our domestic authorities to impose consequences for those failures and ensure that Iran does not reap the benefits of UN-prohibited activity,’ Pompeo stated.

He promised that measures would be announced in coming days against ‘violators.’

With 45 days to go until the November 3 election, Trump could unveil those measures during his speech at the UN General Assembly on Tuesday.

However Washington is almost alone on the issue: all the other great powers -- China, Russia and also the US' own European allies -- have challenged the claim.

‘Any decision or action taken with a view to re-installing (the sanctions) would be incapable of legal effect,’ France, Britain and Germany said in a joint letter sent Friday to the Security Council and of which AFP has obtained a copy.

How did the UN arrive at this spectacular stand-off between the leading superpower and the rest of the planet? To answer that, one has to go back at least one month.

In mid-August, Trump's administration suffered a resounding defeat at the UN Security Council when it tried to extend the embargo on conventional weapons being sent to Tehran, which was due to expire in October.

Pompeo made an unusually vehement attack on France, Britain and Germany, accusing them of ‘siding with Iran's ayatollahs,’ and on August 20 announced a controversial move known as the ‘snapback,’ which aimed to re-establish all sanctions against Tehran a month later.

The sanctions were lifted in 2015 when Iran signed on to an international agreement not to seek to build nuclear weapons.

But Trump said that the landmark accord, negotiated by his predecessor Barack Obama, was insufficient and withdrew the US from the agreement in 2018, then renewed and even strengthened Washington's bilateral sanctions.

At the moment, the US is insisting it is still a participant in the agreement that it stormed out of, but only so that it can activate the ‘snapback’ option.

Virtually every other member of the Security Council disputes Washington's ability to execute this legal pirouette, and the council has not taken the measure any further.

Washington is hammering home that the arms embargo has been extended ‘indefinitely’ and that many activities related to Tehran's nuclear and ballistic missile programs are now subject to international sanctions.

But ‘I don't see anything happening,’ said one UN diplomat. ‘It would be just a statement. It's like pulling a trigger and no bullet coming out.’

Another diplomat deplored the ‘unilateral’ US act, saying that ‘Russia and China are sitting, happy, eating popcorn, watching’ the ‘huge destabilizing fallout’ between Washington and its European partners.

But if the United States were to carry out the threat of secondary sanctions, tensions could continue to spiral.